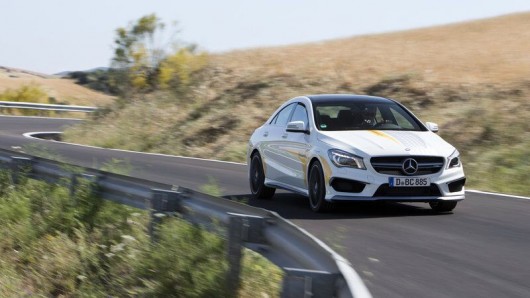 Tyres are all too often overlooked by motorists, seen as just another consumable product on their car. However, they are of vital importance to your safety, keeping you and your car in contact with the road. One in three new vehicles produced in Europe leave the factory on Continental tyres. The premium tyre manufacturer has 317 locations in 53 countries with 205,000 employees. Continental deliver approximately 30 million OE (original equipment) tyres in Europe annually. 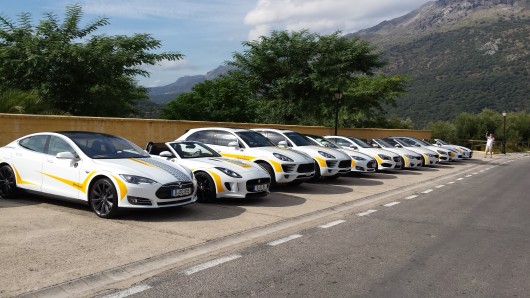 From our base in Mijas (approximately 30 minutes from Malaga airport) we drove deep into the Andalucian countryside which greeted us with a mix of twisty ascents and descents overlooking exquisite scenery. The Mercedes-Benz CLA AMG’s diminutive size coupled with a free-reving engine proved popular on the narrow sections of road. Its 2.0-litre petrol engine produces an impressive 360hp and 450Nm of torque. This power is transferred to all four wheels through a seven-speed automatic transmission. 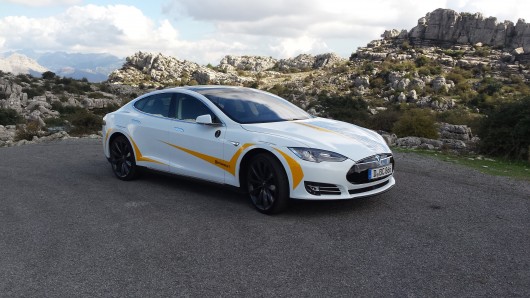 Continental work closely with manufacturers to develop new tyres and new tyre technology to suit specific models. The all-electric Tesla Model S we drove was equipped with 21-inch ContiSportContact 5 Conti Silent tyres. These tyres have a coating bonded to the inside of the tread area that reduces tyre noise by up to nine decibels inside the cabin. Audi was the first manufacturer to fit Conti Silent tyres to its RS 6 Avant and RS 7 Sportback models. We’ve driven a variety of electrically-powered cars over the years but none can compare to the Tesla. It has the range and performance to offer a truly viable alternative to petrol and diesel engines. Its electric motor provides 360hp and 441Nm of torque, crucially all this torque is available instantaneous which equates to fierce acceleration. The cabin is dwarfed by the outsized touchscreen that controls all the car’s features. Accessing the multitude of menus is intuitive, we got to grips with it in a matter of minutes. Tesla currently don’t have a presence in Ireland which is a pity, let’s hope this changes in the near future. 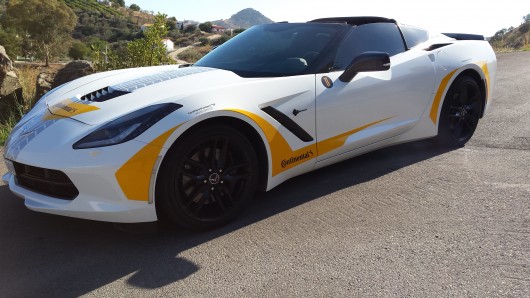 Another rare breed on test was the Chevrolet Corvette C7 ‘Stingray’, this American muscle car has a 6.2-litre V8 petrol engine under the bonnet that sends 460 horsepower to the rear wheels. Despite Continental’s ContiSportContact 5 P tyres offering high levels of grip in dry and wet conditions, it was effortless to illuminate the traction control light in the instrument cluster, not too surprising when you consider the Corvette has 624Nm of torque at its disposal. The driving position is central with the seat, steering wheels and pedals in line with each other. The seven-speed manual transmission would benefit from a shorter throw between gears, it’s a long way off the slick precision of a Mazda MX-5’s transmission. 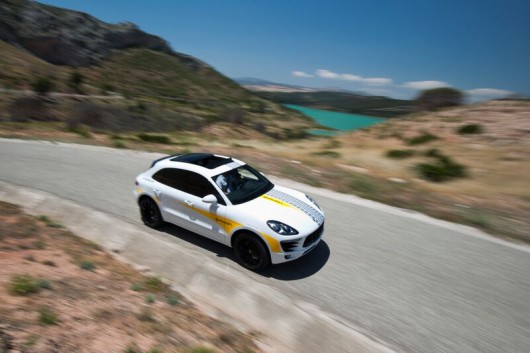 One of the surprise vehicles on test was the Porsche Macan S, it’s an agile SUV that offers comfort and performance with a healthy dose of practicality thrown in. The ContiSportContact 5 is available in a range of sizes from 18-inch upwards for SUVs. The Macan S is powered by a 3.0-litre V6 turbodiesel engine that bids 258hp and 580Nm of torque. It’s mated to a seven-speed automatic transmission that offers seamless gearshifts. Despite its height the Macan handles with precision through corners, the steering is accurately weighted and firms up when Sport mode is selected. Of the six cars on test with Continental, the Porsche Macan S was the practical pick of the bunch, yet still is capable of rewarding with a spirited drive. 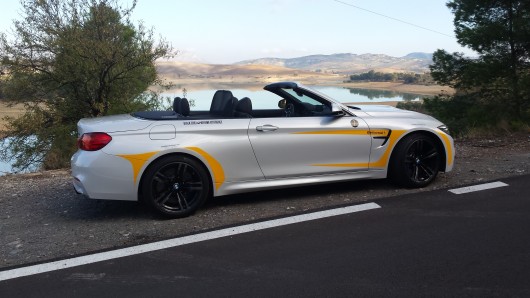 Having driven the BMW M4 Coupé on many occasions previously it was in fact our first time to sample the convertible variant. Once the electrically-operated roof is retracted the M4 comes alive inside, with full sound from its quad exhausts enhanced for all occupants. Our test car was running on ContiSportContact 5P tyres which are set to offer short braking distances on wet and dry roads, as well immense grip and stability for cornering. The M4 convertible didn’t disappoint, it’s effortless to drive and is extremely fast with 431hp and 550Nm of torque produced from its 3.0-litre turbocharged petrol engine.

Our favourite car over the course of two day’s and approximately 1,000 kilometres of driving is the Jaguar F-TYPE. It won our vote for two reasons, the grip from its ContiForceContact tyres and the aural experience provided courtesy of the Jaguar’s 3.0-litre V6 power plant. The ContiForceContact tyre is a road legal track day tyre for high performance cars. Continental’s research and development team conducted extensive tests around the famous Nurburgring race circuit in Germany. In conjunction with the Black Chili compound this tyre has a macro-block shoulder design to increase cornering grip and stability. Driving from the picturesque village of Ronda high up in the hills to Mijas, provided us the perfect opportunity to put all this tyre technology to the test. On clear, well surfaced roads the immense grip on turn-in through tight corners was exceptional. At all times the F-TYPE remained stable and instils confidence in the driver. 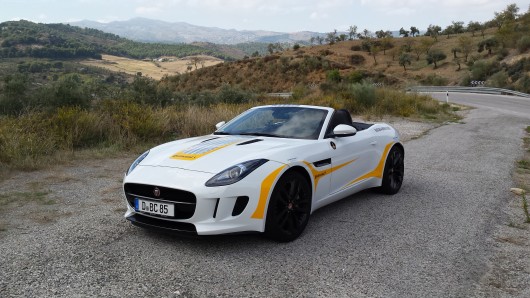 Continental spend in excess of £100 million annually on research and development, they supply tyres to vehicle manufacturers worldwide. We sampled a range of their tyres equipped with the unique Black Chili compound on a variety of vehicles. When your car’s tyres need replacing it’s well worth spending some time researching what tyres best suit your vehicle, before driving to your local tyre centre. A bit of time and money spent on tyres will reward in safer motoring. 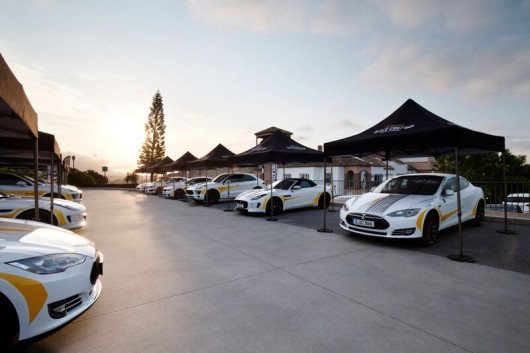 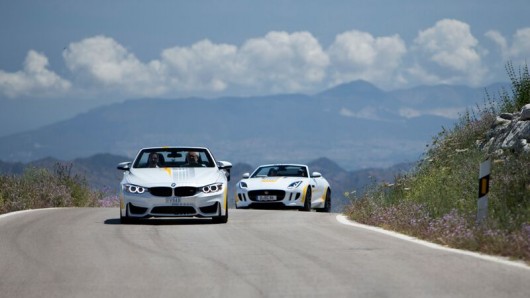 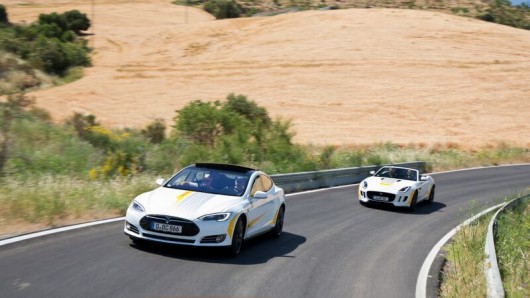