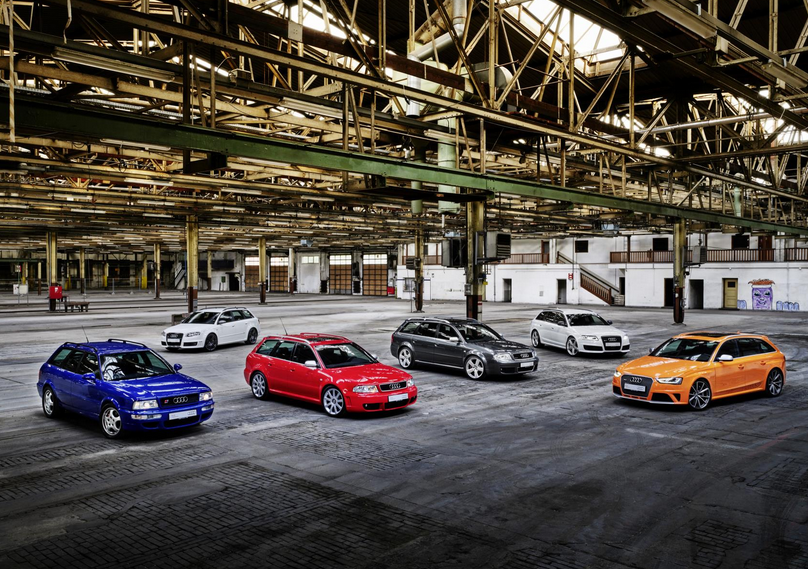 A quarter of a century has passed since the first Audi RS model was launched on the market, marking the beginning of a success story. Ever since the introduction of the iconic RS 2 Avant, the Audi RS models have always been held in high esteem, with many examples now enjoying cult status. To date, Audi Sport GmbH, formerly quattro GmbH, has presented a total of 25 RS models. In 2019, a further six are being presented, of which two are completely new additions to the RS roster.

At Audi, the designation “RS” stands for a philosophy that is driven by a quest for top performance and perfection. “Every RS model expresses the passion that we put into developing our high-performance cars,” said Oliver Hoffmann, Managing Director of Audi Sport GmbH. “For 25 years, our customers have been experiencing the RS models as masterful companions for everyday life that convey pure emotion and maximum driving enjoyment.”

The RS models are the spearheads of their respective product lines. They stand for performance, prestige and exclusivity at the limit of what is technically feasible without any loss of everyday usability. Many of them are pioneers in their market segments and trailblazers for technical innovations – that applied to the Audi RS 4 Avant with its barnstorming biturbo V6 19 years ago and it applies just as much to the TT RS and its multi-award-winning, forceful five cylinder in its latest evolutionary stage.

RS 2 Avant to RS 4 Cabriolet: Dynamism rooted in tradition
The RS models have been making a splash for a quarter of a century – five milestones merit particular mention.

In 1994, the 315PS Audi RS 2 Avant with its four-valve, five-cylinder engine, long since in use, wrote the first chapter of the RS story. With this car, the company established the segment of the dynamic high-performance station wagons. The quattro drive with its self-locking centre differential that had proven itself in motor racing and rallying made it possible to masterfully transfer this high performance to the road.

In 1999, the Audi RS 4 Avant based on the S4 of the time introduced a new dimension in terms of power to the medium-size class. Under the bonnet, a V6 engine with displacement of 2.7 litres, five valves per cylinder and biturbo charging does all the work – just like in the S4. The engineers at what was then quattro GmbH developed the power unit, which was already very powerful, to give it even more vibrancy and even higher torque for use in the RS 4. In collaboration with Cosworth Technology, the cylinder head was newly developed, the intake and exhaust ports were revised and the cross section of the air ducts were enlarged on the suction and compression sides. Furthermore, the turbochargers are larger and the boost pressure is increased compared with the S4. As a result, the RS 4 engine develops maximum power of 380PS instead of 265PS.

The second generation of the RS 4 followed in 2005. Numerous innovations, many of which originated in motorsports, characterise this generation. A standout among these was the V8 engine with 420PS. It was the first time that a manufacturer had relied on the combination of petrol direct injection and a high-rev concept that allowed up to 8,250 rpm. The petrol direct injection engine enabled improved power output through more effective production of the fuel/air mixture. In the R8, which enjoyed success at Le Mans, the FSI technology had already proven its performance in impressive style. In 2007, the engine was also used in the first generation of the Audi R8. The suspension offered the latest generation of permanent all-wheel drive as well as the Dynamic Ride Control damper system that was first used in 2002 in the RS 6. With its asymmetric dynamic torque distribution in the ratio of 40 percent front to 60 percent rear, the refined quattro drive with self-locking centre differential ensured optimum traction. The first and, to date, only RS 4 Cabriolet provided open-top driving pleasure with the background music of the sonorous V8 aspirated engine.

2008 saw the arrival of the RS 6 Avant, a sports car in the form of an unobtrusive business station wagon. With a completely newly developed V10 engine with FSI direct injection, biturbo charging, dry sump lubrication which is also used in motorsport as well as the quattro permanent all-wheel drive, the RS 6 Avant put itself ahead of the competition. With the impressive V10 force complete with 580PS of power and 650 Nm (479.4 lb-ft) of torque, the RS 6 Avant was the most powerful series production Audi to date. The crankcase of the V10 power unit was made in a low-pressure chill casting process from an aluminium alloy – a high-tech material that combines low weight with high strength. The cylinder liners of the connected crankcase were mechanically exposed, with the result that the entire engine weighed only 278 kilograms. In order to meet the most exacting demands in terms of vehicle dynamics at the same time, the engine’s oil circuit was developed with dry sump lubrication, which was tried and tested in motorsports. The external oil container and the oil pump module, which operates with numerous suction stages, ensured that all engine components and the two turbochargers were lubricated at all times. Today, this high-performance technology is used in the Audi R8.

In 2011, the RS 3 Sportback with 340PS, which in turn had a five-cylinder engine, brought the RS philosophy to the compact class. In 2013, the RS Q3 opened up another market segment as the first compact SUV. It was powered by the transversely installed 2.5-litre five-cylinder engine, as used in the TT RS and RS 3. At less than 50 centimetres long, the engine was very compact. This made the long-stroke engine (bore x stroke 82.5 x 92.8 millimetres) perfect for transverse installation. Initially, it produced 310PS, but this increased to 340PS from late 2014. The RS Q3 performance that followed in 2016 even reached 367PS.

The RS models have extraordinary turbo engines under the bonnet, with the inexorable five-cylinder that has a strong tradition with the four rings leading the way. During the 1980s, they powered the Audi rally cars, touring cars and production models to the front of the pack. The first RS model, the RS 2 from 1994, also had such an engine. The five-cylinder made its comeback in 2009 in the Audi TT RS; it made its way into the RS 3 Sportback in 2011 and two years later into the RS Q3. Today the 2.5 TFSI runs not only in the TT RS, but also in the RS 3. Following its revision, the five-cylinder is 26 kilograms lighter than the previous version. Its crankcase is made of aluminium, which alone saves 18 kg. Elaborate measures reduce internal friction while at the same time increasing power output. The cylinder barrels are plasma-coated; the crankshaft main bearings are six millimetres smaller in diameter. The crankshaft is hollow bored and is therefore 1 kg lighter, while the aluminium pistons have integrated channels for oil cooling. In the short warm-up phase after a cold start, the switchable water pump does not circulate the coolant in the cylinder head – the 2.5 TFSI engine thus reaches its operating temperature more quickly. This lowers the coefficient of friction and reduces fuel consumption. The ignition sequence 1-2-4-5-3, supported by the geometry of the intake and exhaust system, provides the unmistakeable engine sound that made Audi popular back in the 1980s.

The innovative Dynamic Ride Control damper control system is also exclusive for the models with a longitudinally installed engine – a pioneering innovation that was first used in 2002 in the RS 6. This integrated roll and pitch stabiliser consists of a special damper system that counteracts the movements of the vehicle body with no delay without the use of electronics.

When the vehicle is turning into and traveling round a corner, the damper response is altered so that the vehicle’s movements about the longitudinal axis (roll) and about the transverse axis (pitch) are significantly reduced. The dampers on one side of the vehicle are connected to the dampers diagonally opposite to them via two separate oil lines, each of which has a central valve. The valves mounted close to the rear axle provide the necessary compensating volume via internal pistons with the gas-filled compartment behind them. When the vehicle is steering into and traveling round a bend, an oil flow is generated between the diagonally opposite dampers via the central valve, thus creating additional damping force. When one side is cushioned, the damping characteristics are altered such that roll and pitch movements are eliminated almost entirely. As a result, this highly responsive damper system ensures that the RS models have particularly good track stability when negotiating bends.

The RS sport suspension available in the current RS 4 Avant and RS 5 Coupé and Sportback models, which features Dynamic Ride Control (DRC), has a three-stage variable damper response. With the aid of Audi drive select, the driver can influence the damper response and thereby personalise the driving experience. The new generation of dampers with integrated valve is more compact and lighter. In addition, it enables the damping forces to be spread even more widely between the comfort and dynamic modes as well as more precise suspension adjustment for high damping forces, which occur when cornering at speed in particular. The result: In comfort mode, the RS sport suspension with Dynamic Ride Control (DRC) ensures impressive ride quality. In the dynamic program, it delivers extraordinary driving precision even when cornering at high speed.

25 years of RS – Exhibition at the Audi Forum in Neckarsulm
On July 12, 2019, an exhibition opened at the Audi Forum in Neckarsulm to mark the anniversary. Besides the familiar production models, a total of 14 genuine RS rarities are presented. Among them is also the racing car version of the Audi TT RS from 2011 that was developed for the factory-backed commitment at the Nürburgring, the RS 5 DTM race touring car that was triumphant in the 2013 season as well as a prototype of an Audi RS 8 that did not go into production. Further, the exhibition also features an RS 4 Saloon that received a highly exclusive paint finish by the Brazilian pop artist Romero Britto.

The RS models in chronological order: