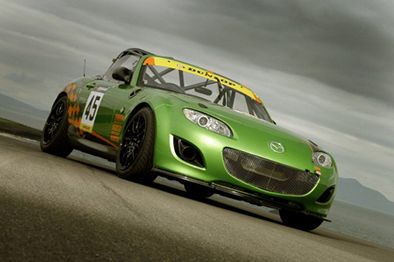 The Mazda MX-5 is widely regarded as the world’s best roadster, Mazda recently produced the 900,000th MX-5 which just goes to prove the car’s popularity. Mazda have proven to be successful in Motorsport too, most notably winning the Le Mans 24hour race. Mazda recently set Jota Sport the challenge to build an MX-5 GT race car to compete in the 2011 Britcar Endurance Championship. Jota Sport started with a bare MX-5 shell and used intelligent weight saving measures to produce a car weighing just 850kg. The modified Mazda engine has some trick Cosworth parts to produce 275hp, making it the world’s most powerful MX-5. The car runs a full race six-speed sequential gearbox and race differential.

Mazda kindly entrusted me to test drive their MX-5 GT race car on track at Anglesey race circuit in the U.K. After some initial laps in an MX-5 road car to familiarise myself with the track, I was given a production spec race car for a number of laps. The production race car looks the same visually as the GT car, although in terms of development, it’s miles apart. 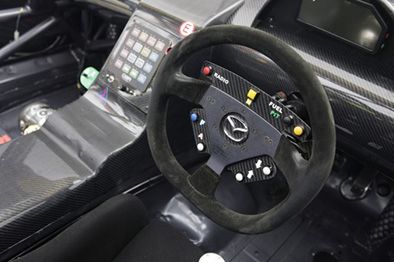 As I’m strapped into the GT car by one of the team engineers, it becomes apparent that this is the real deal, a full-on proper race car. As I exited the pit lane I accelerated cautiously on the first lap, allowing the slick racing tyres time tor each their optimum temperature and time for me to get acquainted with the car. The acceleration is fierce, and the paddle gear-changes instantaneous, what’s most impressive though is the grip provided through the corners. There is no understeer on turn-in, the car remains level throughout the corners and handles impeccably well. Mazda and Jota Sport are currently lying third in class with two podiums so far in their first season of racing. I’ve no doubt they will feature on many more podiums.