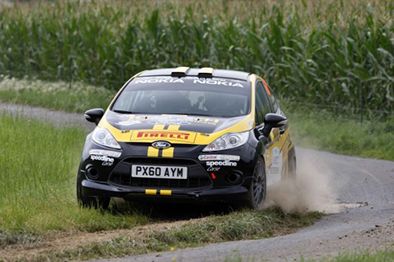 Craig has shown incredible pace on the first tarmac round of the year and after Day One of ADAC Rallye Deutschland he is placed second behind Spanish driver Yeray Lemes. Breen trails the Canary Islander by 32.4s after Friday’s six stages.

Breen, who started the event joint second in the title standings with fellow Pirelli Star Driver Brendan Reeves, is a strong second, recording fastest time on stage four and being second fastest on three of the days tests. “It’s gone well so far,” said Breen, but the over night gap could have been closer; we hit the side of the car on the last stage and bent two wheels. Tomorrow is another tough day, eight stages, including a double run over the famous Panzerplatte stage.”

Stage three of the opening loop on Friday morning was cancelled for the Academy crews and as the cars return to the midday service halt, Breen held third place behind Lemes (ESP) and Alastair Fisher (GBR). In service Breen commented, “The first stage was dry but it rained during stage two, I took a cautious approach over the wet surface and the cuts.”

On the rerun of Ruwertal/Fell, stage four, Breen set his first fastest stage time of the day being 1s quicker than Lemes and 11.6 faster then Fisher. This elevated the Waterford driver to second overall. On the penultimate stage, the top three were separated by only 1.7 seconds, Lemes fastest with a time of 14:41.8, Breen was +1.3 in second and Fisher a further .4 back in third. On the final stage of the day, Breen looked to be on a flyer until he hit trouble in the last sector, striking the side of the car and damaging two of his wheels. Lemes went on to take the stage win, his fourth of the day and finish with his overnight lead of 32.4

Fisher however lost nearly three minutes when he punctured on the last test and now looks out of the running. Championship leader Egon Kaur from Estonia took a very cautious approach during the Friday’s stages and ended the day in fourth 1:27.2 down on the rally leader.

Day two Saturday will be a challenging test with a total of eight stages. The action entailing a double loop of four special stages, Hermeskeil/Gusenburg 1(stage 7)getting underway at 08.18hrs.