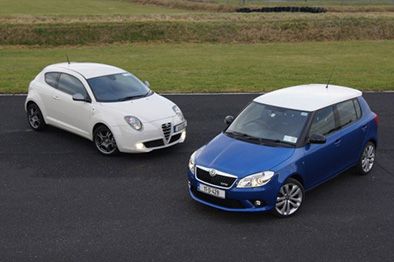 In recent times, Irish consumers have become extremely price sensitive. Whether it’s a new pair of Jeans or this week’s grocery shopping, they will search for the best value for money. If you’re lucky enough to be in the hunt for a new hot hatch that represents value, then both Alfa Romeo and Skoda may have the solution for you.

Alfa’s top-of-the range Mito earns itself the famous Cloverleaf label taken from Alfa Romeo’s rich motorsport heritage. It proudly wears Cloverleaf badges on its front wings, these along with 17” alloys and a rear spoiler help distinguish this Mito above the rest. It may be small in size but the Mito Cloverleaf packs a punch. Its 1.4 TB MultiAir petrol engine produces 170 horsepower and 250Nm of torque. Skoda’s Fabia RS is also powered by a 1.4 litre petrol engine, however it manages to push out 180hp and 250Nm of torque, it transmits this power to the road through a seven-speed DSG twin-clutch gearbox. The dsg gearbox is a delight to use and offers near instant gear changes. You’ve the option to drive the car in full automatic mode or you can push the gear-lever to the left and change gears manually with either the gear stick or via the paddles behind the steering wheel. 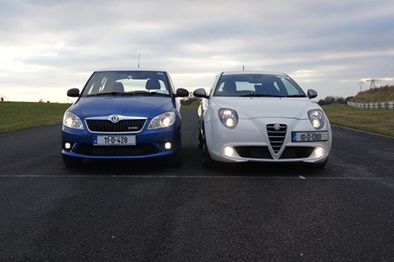 On track, you can really begin to appreciate the fast up shifts under acceleration out of the corners. The Skoda handles its power remarkably well, as you turn into a corner approaching the apex at speed the Fabia’s impeccable handling instils confidence in the driver, at no point does the car feel under pressure. There is good feedback through the steering wheel, even though the steering itself feels a bit light. The car’s firm suspension can be felt on the road, although it doesn’t cause distraction to the driving experience.  The Mito Cloverleaf is no slouch on track either and gives the Fabia a good run for its money. Under initial acceleration the Mito feels faster, the six speed manual gearbox provides crisp and precise gear changes, the brakes are certainly impressive and allow the car to outbrake the Fabia into the corners, although it loses out to the competition here, the Fabia RS is more stable through the sweeping bends of Mondello Park’s International Circuit. 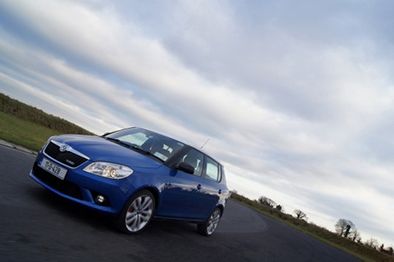 The style award must go to Alfa for the Mito Cloverleaf’s interior. The optional stitched leather seats provide a base to view the carbon fibre effect dash, complete with sculpted instrument clocks. The Mito has Alfa’s Blue&Me hands-free telephony system and a usb port too. In contrast the Fabia’s interior is a bit of a let down after experiencing the Mito’s, there’s no indication that you’re driving something a bit special, the black plastic dash is comparatively dull to the Mito’s modern fashion conscious interior.

Prices aren’t far apart for these two hot-hatches, Alfa’s Mito Cloverleaf is priced from €23,995 while Skoda’s Fabia RS comes in slightly under at €22,690. The Mito sits in tax band B resulting in an annual road tax of €156, while the Skoda drops to band C, it’ll cost you €302 to tax. Take into account the high level of standard specification that comes on the Fabia RS, plus the practicality of having four doors and it would appear to be the better choice on paper. That’s where the practical person would stop and make their decision, for me however, it’s a lot more difficult to choose one over the other. I adore the Mito’s Italian styling, its frantic pace and the fact it is an Alfa Romeo after all. For a weekend’s driving I’d choose the Mito Cloverleaf without a seconds hesitation, if on the other hand I was to purchase one out of the two here, I have to be honest and say I’d go for the Fabia RS. It’s incredible value for money and a true all-rounder, amongst the standard specification on-board you get 17” ‘Gigaro’ alloys, front and rear spoilers, twin exhausts, integrated LED daytime running lights, tyre pressure monitors, climate control and Bluetooth preparation. I have no doubt which ever one you choose, you won’t be disappointed, both cars will provide a thrill and put a smile on your face.