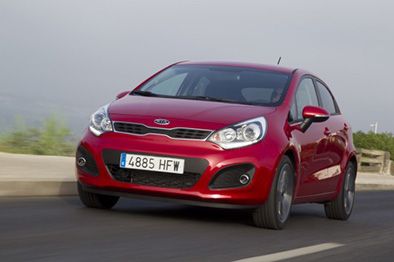 Kia Motors Ireland have announced the prices and specs of the AllNewRioRange   which will go on sale in Irelandtowards the end of October. There will be two model trims for Rio in Ireland  –LX and EX .The entry level LX at €15,295 is powered by a 1.25 petrol engine which is A rated for annual road tax whilst the EX model will be available in both the 1.25  petrol and 1.4 diesel ( also A rated )  at €16,495 and € 17,895 respectively . Like all Kia models the newRio will of course come with Kia’s unbeatable 7 year warranty.

The new Rio is one of the company’s most anticipated launches in recent years and attendees at this years National Ploughing Exhibition will have an opportunity to preview the car before it’s launch next month .

The new model is longer, wider and lower, and features a wheelbase extended by 70 mm – greatly enhancing passenger space and cargo capacity.  With an overall height of 1,455 mm, newRiohas one of the lowest rooflines in Kia’s European product range, emphasising its purposeful stance.
The cabin is more spacious than its predecessor’s, enhancing occupant space and cargo capacity.  The base of the windscreen is moved forwards by 156 mm and up by 18mm, while the wheelbase is 70 mm longer and the bodyshell 25 mm wider.  Front legroom is increased by 45 mm, front headroom by 8 mm. Trunk space in three- and five-door hatchback models is 100 mm wider and the capacity is now 288 litres – a 6.6 per cent improvement over the previous model – with the rear seats upright, and more than 920 litres with the rear seats folded down.  The backrest of the rear seat is split 60/40 for maximum versatility and creates an almost flat load area when folded down.

In addition to the enhanced space and safety New Rio customers will enjoy audio  comfort features such as Bluetooth ,remote audio controls and iPod compatibility . The EX model which is expected to be the volume seller comes with a host of  features including  16” Alloy Wheels ,front fogs ,all round electric windows ,leather trimmed steering wheel and gearshift and cooled glove box .

The current model has sold over 4500 units inIrelandsince it launch in 2005 and the company is targeting sales of 1000 units for 2012.

“Following on last year’s launch of Sportage and the recent launch of our new Picanto Kia continues to push the barriers in terms of engineering and design “ commented Kia Motors Ireland ,Managing Director James Brooks . “ The new Rio is a truly stunning looking new car which is sure to entice Irish motorists as they shop for a new car for 2012 not forgetting of course the peace of mind that comes with Kia’s industry leading 7 Year Warranty “