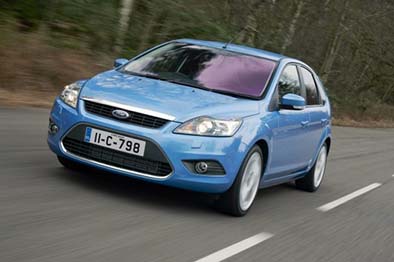 Ford has confirmed the first production applications for its smallest-ever EcoBoost engine at the 2011 Frankfurt Motor Show. With only 3 cylinders and 1.0 litre of displacement, the new EcoBoost engine will provide fuel-efficient power for three models in the European product range – first the Focus, followed by C-MAXand the all-new Ford B-MAX.

The new 1.0-litre engine is the latest addition to Ford’s global family of EcoBoost engines, which currently range in capacity from 1.6 to 3.5 litres globally. Downsized EcoBoost engines feature turbocharging, direct injection and other technologies and replace larger engines with no loss of performance and with lower consumption.  Ford will introduce two versions of the 1.0-litre engine in the Focus inEuropein early 2012 with 100PS and 120PS and 5-speed and 6-speed manual transmissions respectively. Ultimately, this all-new engine will be made available in Ford models inNorth America,Chinaand in other regions.

“By offering the Focus with an advanced small-displacement petrol engine Ford is not only making a major statement on how serious we are about engine downsizing – it also shows the strength of our development and engineering capabilities. To produce a 1.0-litre EcoBoost petrol engine with such impressive performance and fuel economy is a clear example of our commitment to be class-leading in fuel economy,” saidGraham Hoare, Executive Director, Powertrain, Ford of Europe. With its 1.0-litre capacity, the 3-cylinder EcoBoost engine will be the smallest engine currently produced by Ford. Yet, despite its small capacity and proportions, the forward-thinking design delivers power and performance to rival a traditional 1.6-litre petrol engine while emitting less than 120g/km CO2 in the Focus.

Developed at Ford’s Dunton Technical Centre in theUK, this direct-injected EcoBoost engine features a new compact, high performance turbocharger design. The extremely fast response of the turbocharger and its ability to reach nearly 250,000rpm results in virtually no turbo lag and peak torque of 170Nm from 1,300-4,500rpm in the 120PS variant.

The all-new EcoBoost engine also features an exhaust manifold cast into the cylinder head, which lowers the temperature of the exhaust gases and in turn enables the engine to run with the optimum fuel-to-air ratio across a wider rev band. An advanced “split cooling” system reduces fuel consumption by warming the engine more quickly and – unlike the larger EcoBoost engines – cast iron has been selected for the block, reducing the amount of energy needed for warm-up by up to 50 per cent compared with aluminium.

Intelligent ancillaries such as a variable air-conditioning compressor and oil pump also reduce demand on the engine – improving economy and emissions – while special coatings for engine components and intricate development of engine geometry result in minimal frictional losses. Ford Auto-Start-Stop, Active Grille Shutter and Ford Smart Regenerative Charging will also be available as part of the Focus and C-MAX1.0-litre EcoBoost package. Like its larger capacity siblings, the 1.0-litre EcoBoost engine will use Ti-VCT twin variable camshaft timing to further improve performance and economy. Ford has also employed an all-new camshaft actuator to speed up response times without sacrificing durability.

In the all-new 1.0-litre Ford EcoBoost engine, the emphasis in development has been on delivering both smooth and refined performance. Engine refinement is improved thanks to an innovative design that immerses the two main engine drive belts in oil – resulting in quieter and more efficient running but with the durability of a chain. Careful attention has also been paid to mitigating the natural vibrations of the 3-cylinder design.

Rather than employ the traditional method of adding energy-draining balancer shafts, Ford engineers have deliberately “unbalanced” the flywheel and pulley to offset the engine configuration. Ford believes these innovations combined with optimised engine mounts will deliver a truly refined performance feel perfected during 720,000km of tests – including 360,000km of durability trials and 10,000km of environmental testing.

“The 1.0-litre EcoBoost is one of the most advanced engines Ford has ever produced and makes use of so many innovative techniques and technologies that it’s difficult to keep count” said Hoare. “It has always been Ford’s strategy with EcoBoost technology to look at every single detail in our relentless pursuit of improving fuel economy without compromising performance, and this new engine demonstrates that philosophy perfectly. The net result is an engine that we’re sure will surprise and delight our customers.”

Further technical details of the new Ford EcoBoost 1.0-litre engine will be provided closer to market launch across Europe in early 2012.