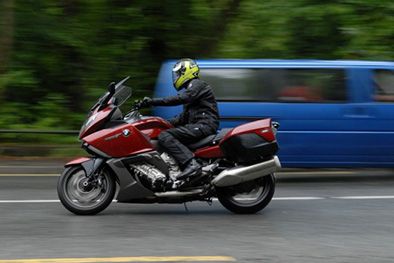 BMW’s eagerly awaited new grand-tourer motorcycle has arrived on Irish shores, it’s available in two guises, the K1600 GT and GTL. Both feature BMW’s all-new 1,649 cc six-cylinder engine which sits low in the bike’s frame. Mechanically the GT and GTL are the same, however there are some visual differences which tell them apart, the GTL has a large top box which is capable of carrying two full-face helmets and side lights on the fairings. The GT is a slightly sportier bike, while the GTL has a more relaxed seating position with lower foot rests and a lower seat height. I test rode a K1600 GT for a few days and managed to fit in some city traffic, scenic mountain passes and incur plenty of rain along the way, with some sudden bursts of sunshine, a typical summer’s day in Ireland. For a bike of this proportion and weight (319kg) I was pleasantly surprised at how maneuverable it was at slow speed through heavy traffic, aided by the smooth throttle and light clutch.

Once on the open road you can unleash some of the bikes vigorous 160hp from its six-cylinder engine which emits a healthy rasp that’s delivered through two large rear silencers. The engine itself has three power modes, Rain, Standard and Dynamic, whilst in Rain mode the power output is reduced and the throttle is less sensitive to input. I found Dynamic suited my riding style best with instant response delivered from throttle input. The engine is silky-smooth with no vibration evident, its 175 Nm of torque is sufficient to provide decent acceleration throughout the rev range. The €21,500 GT is somewhat more akin to an executive car than a motorcycle, with the host of technology onboard. For comfort, you have heated handle grips, heated seats and cruise control. There’s a compartment for storing your phone or mp3 player with a usb connection provided, and an onboard radio. There’s a docking station for BMW’s optional Satellite Navigation unit which sits neatly below the adjustable screen, which also locks the unit in place when the ignition is switched off. 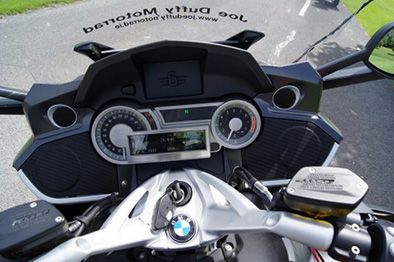 All the GT’s main computer functions such as the stereo and suspension modes are carried out by the use of a twist wheel on the left handlebar, it takes no time at all to familiarise yourself with the twist and click system. My test bike had the optional ESA (Electronic Suspension Adjustment) fitted which lets you change the suspension settings whilst on the move, you can choose between Comfort, Normal and Sport, each providing a different damping from the bike’s suspension. Both bikes have a new and very practical headlight, it’s self- adjusting for both height and direction, the lights point where you are going even through twists and turns in the road. 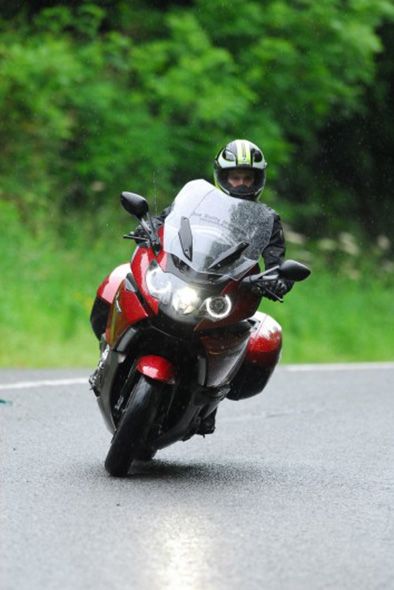 If you intend on using the GT or GTL for the purpose intended, there’s plenty of storage in the removable side panniers and also some convenient storage compartments which can all be locked centrally by the remote or via a switch on the handlebar. Now all I have to do is to plan my route to the South of France, pack the panniers and set off on the essence of two-wheel luxury that is the BMW K1600 GT.