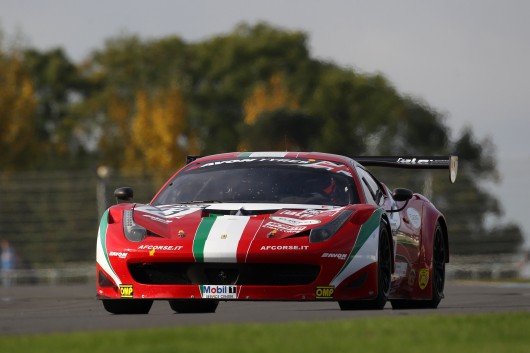 Ex Japanese Super Formula and Super GT Champion Richard Lyons has been announced to drive in the British GT Championship in 2014 for AF Corse. The Northern Irish driver will be joining John Dhillon, Aaron Scott and Pasin Lathouras at the wheel of the squads two AF Corse Ferrari 458 Italia. Dhillon and Scott start as the most experienced pairing after competing for AF Corse in 2013, giving powerful performances throughout a very hard-fought season.

Lyons has been teamed up with the 20-year-old Thai racer and Ferrari Challenge Asia graduate Pasin Lathouras, both making their debut. All four drivers will race the whole British GT Championship and at Spa and Silverstone, AF Corse will line up a third 458 with Charlie Hollings and Jacques Duyver.
Lyons will have a busy year ahead as he will be continuing his long team relationship with Audi Sport team Hitotsuyama Racing and will see Lyons competing in the Japanese Super GT Championship at the wheel of an Audi R8. The 34-year-old, who is also a V8 Supercars race winner and former Team Ireland A1GP driver, has not raced in the UK full-time since finishing second in the 1999 Formula Palmer Audi championship.

Commenting on the announcement Lyons said, “I am extremely excited and honoured that I will be back racing in Britain for the prestigious British GT Championship with AF Corse. Most of the circuits I have raced on in the past with great results and look forwards to succeeding with the Ferrari 458 GT3. My team mate, Pasin Lathouras does not have experience racing on these circuits but has been very successful and super fast in the Asian series. I think we can have a great partnership with AF Corse and look forward to the season ahead. The 2014 season will visit six UK venues with one international event held at the Belgian circuit, Spa-Francorchamps. Ten races will be held with the first race of the British GT Championship being held at Oulton Park, with a double race on April 19th.