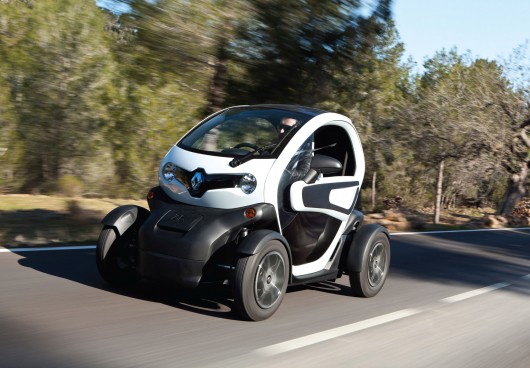 Fun with a capital F. It’s the only way to start off describing the Renault Twizy. By now the country is in a Twizy frenzy with YouTube and Facebook accounts awash with pictures and videos of this unique runaround. Renault has taken the bold step to introduce this 100% electric car to the Irish market, initial feedback appears to be good.

With zero emissions the Twizy is VRT free and priced at just €9,995. Add to this the cost of doors at €500, plastic zip up windows at €300 and what you see here will cost €10,795. Running the Twizy is inexpensive but not exactly free. First off, it takes roughly 3 and half hours to charge at a cost between €2 and €3.50 depending on the time you choose to charge. It charges using a standard 3 pin plug fixed to a 3 meter cable which deploys from under the tiny bonnet. You must also hire the battery from Renault at a cost of €50 per month. This might seem like a catch but if you consider the cost of most electric cars I’m sure you would rather opt for this battery hire scheme than buying outright. This also gives you the piece of mind that if your battery does die, or fail to hold a full charge, Renault will immediately replace it. Servicing costs are pretty cheap because there are no lubricants to replace annually so early estimates are between €50 and €100. Sadly the Twizy isn’t exempt from road tax, but it will be charged at the lowest rate of €120 a year. So can this car work in Ireland and will people opt for electricity over petrol or diesel? I think they will and more importantly they should. I know we don’t have the cosmopolitan city with accessible charge points at every corner, but with a range of 80 to 100km of city use you could easily commute without needing daily charges. 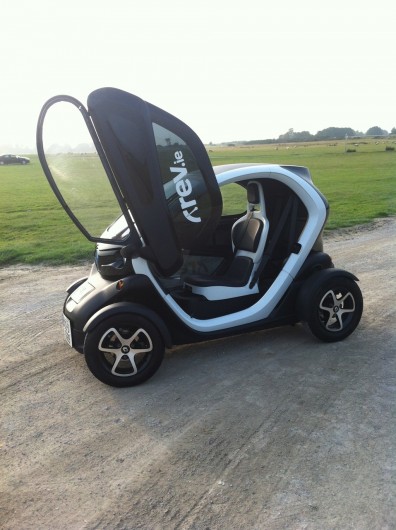 I had the Twizy for a week and done approximately 30km a day. My driving was not city driving but more flat out country commuting every evening. I used half a charge each day and enjoyed every minute of it. The Twizy handles fantastic and tops out 85 km/h. On back roads it feels fast and planted but on motorways it feels slow and somewhat hard on the road. The seat slides forwards and backwards, however there is no tilt adjustment, which allows space for a rear passenger. This means the slightly upright driving position can get tiresome over long journeys. The dash features a range indicator and eco-score display. You have the usual car stalks to operate wipers, lights and indicators but there is no heating. 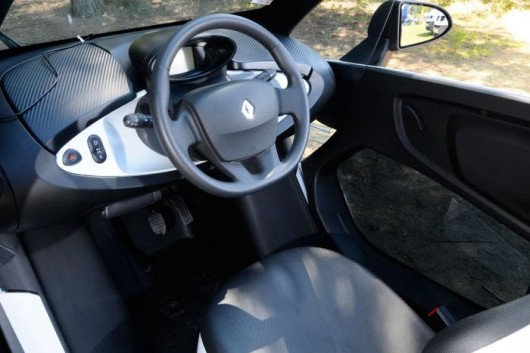 As the Twizy is designed not to have doors the upward scissor opening doors and flimsy plastic windows do let in considerable wind. It’s not waterproof either but I can’t see the driver ever getting wet as it’s quite cocooned inside. Without a passenger you have 31 litters of boot space and you get two dashboard glove boxes. When driving or actually braking you engage the Renault Sport developed regenerative braking system that helps charge the battery. This technology was pioneered in F1 called KERS. As a package it works and I will tell you why, cars at this money are rather cheap and cheerful, they offer little character and even less driver involvement. On the other hand motorcycles at this money are fun but not for everyone and it means sitting a totally different test for another license. 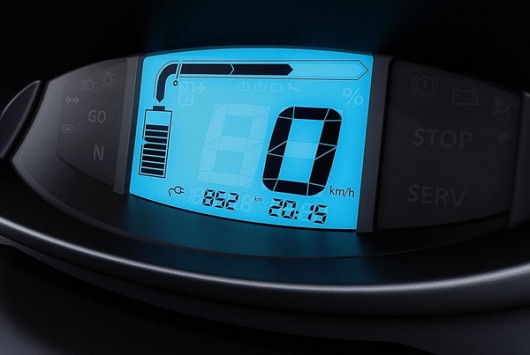 The Twizy is cool, fun to drive and economical in the grander scheme of things or more importantly over a year compared to a car. Parking it is simple and it doesn’t feel as vulnerable to drive as it looks. One thing I will say is be prepared to turn heads. I have driven everything from superbikes to Italian supercars on Irish roads and nothing commands attention like it. In truth, it’s a marketer’s dream machine! Stick your company name or website on the side and gauge the response. You will be surprised because we certainly were! 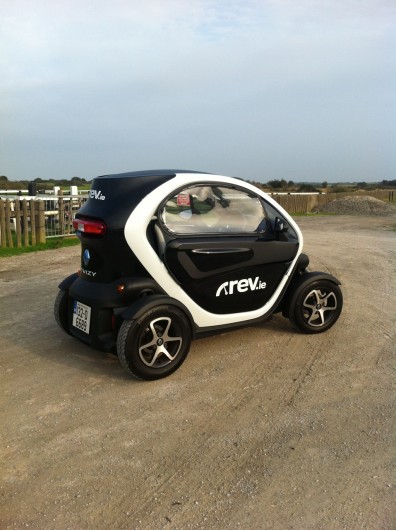