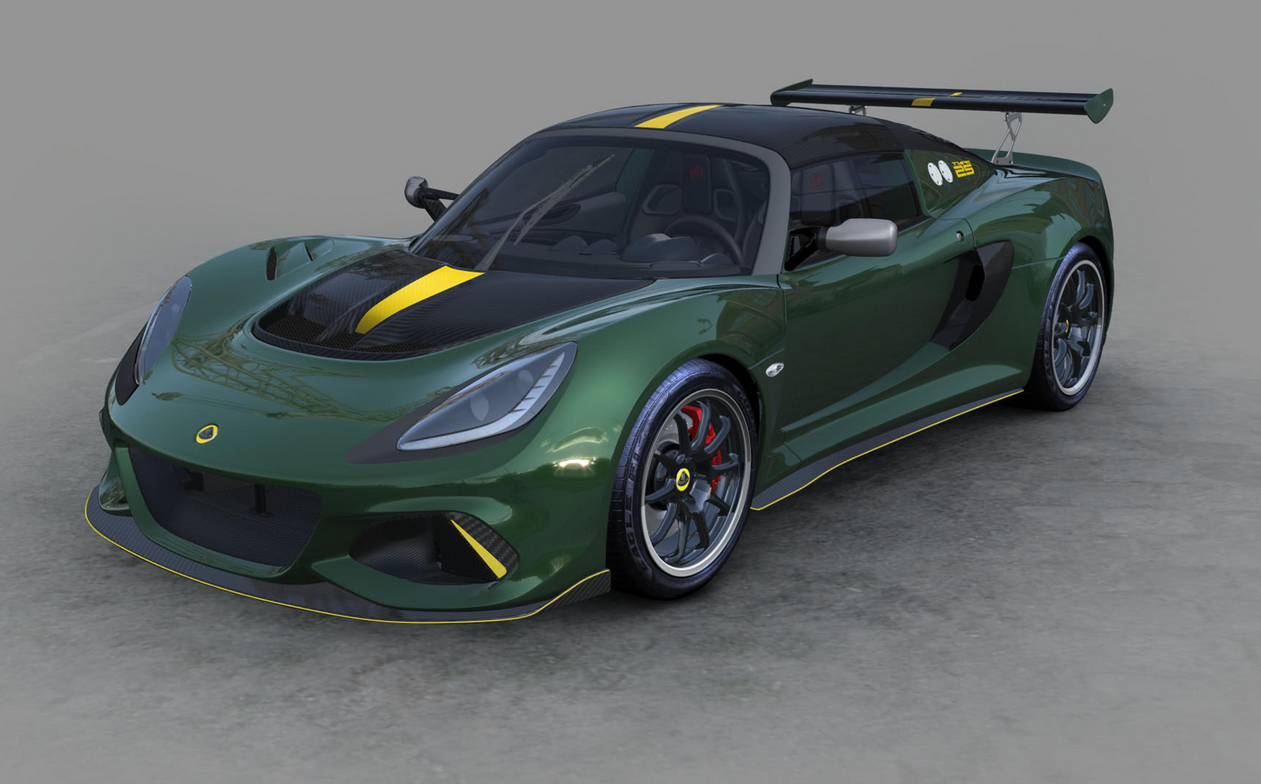 The new Lotus Exige Cup 430 Type 25 is a collector’s piece like no other and a fitting tribute to one of the most successful and influential Formula 1 cars of all time. Based on the celebrated Exige Cup 430, unveiled at the end of last year, the two-seat Type 25 is a unique opportunity to relish a universally acclaimed sports car named in partnership with Classic Team Lotus. Referencing the Type 25, the single seat Lotus racing car that dominated the 1963 season, the new car features a raft of exotic and unique features as well as specially commissioned heritage documentation. Powered by Lotus’ formidable 3.5-litre supercharged and charge cooled V6, producing 430 hp and 440 Nm, the Lotus Exige Cup 430 Type 25 is not only the fastest in its class, sprinting from 0-60 in just 3.2 seconds, its carefully optimised aerodynamics generate up to 220 kg of downforce.

Classic Team Lotus preserve and promote the history of the race team that operated from 1954-1994, and Lotus has worked with Clive Chapman, Director and son of Lotus founder Colin Chapman, so that this edition proudly wears a Type 25 classification in tribute to a legendary Formula 1 car. Helping mark Lotus’ historic motorsport successes, this bespoke version of Lotus’ quickest real-world sports car is ensured instant collector status. Jean-Marc Gales, CEO, Group Lotus plc said, “We are proud to have named this unique Lotus Exige Cup 430 in honour of the Lotus Type 25, a car which left an indelible mark on the development of motorsport. It was revolutionary when introduced and the first car to win Lotus a Constructor’s World Championship, the first of seven. It is a perfect example of Lotus’ design philosophy – light, yet incredibly strong and peerless on the racetrack. That same ethos, our company DNA, is found in the Exige Cup 430 Type 25, which is lighter than its predecessors and even more powerful. Combined with a class-leading balance in handling and agility, it’s our ultimate point-to-point two-seater sports car.”

Just 25 editions of this landmark vehicle will be produced, each accompanied by a numbered certificate of authenticity, signed by Jean-Marc Gales, and proudly wearing a matching plaque detailing its number in the limited production run. Owners have the option of collecting their Exige Cup 430 Type 25 from the famous Hethel factory as well as guided tours of Lotus’ modern vehicle production facility and of the Classic Team Lotus facility. A signed hardback copy of the acclaimed book: Jim Clark: Tribute to a Champion by Eric Dymock signed by Clive Chapman, and Bob Dance, a principal mechanic for Jim Clark during his Formula 1 race career, accompanies every car.

Driven by some of the greatest names in racing, including Jim Clark, Mike Hailwood, Chris Amon, and Richard Attwood, the Lotus Type 25 competed against the best on the grid from 1962 to 1967, and changed the evolution of racing cars forever. Abandoning existing conventions, it was the first Formula 1 car to use a revolutionary fully stressed ‘monocoque’ chassis design, reinforcing Lotus founder Colin Chapman’s reputation as a ground-breaking engineer. It led directly to the Lotus Type 33 and Type 49 racing cars, themselves championship winning designs.

As befitting a multiple champion, the new Lotus Exige Cup 430 Type 25 takes its inspiration from the race car, with the Hethel-based company’s quickest real-world sports car as its starting point, before being lavished with time and materials to produce something special.

Distinguishing the edition, every Exige Cup 430 Type 25’s unique livery is appropriately finished in metallic Lotus Racing Green, or Old English White, with subtle but sharp contrasting pinstripes on the front splitter, front access panel, new and unique bargeboards, roof panel and rear wing, as well as unique decals on each rear buttress. The work of the increasingly popular Lotus Exclusive programme, the Exige Cup 430 Type 25 combines traditional British craftsmanship with the best of modern design, as well as a nod to the brand’s heritage.

Built for the road, but with a track focus, motorsport inspired aerodynamics play their part in defining the car’s performance. The carbon front splitter with trailing lip helps separate and speed airflow under the car and the inclusion of new air curtain elements into the front clam panel efficiently moves air though to the front wheel cavities to help reduce turbulence and drag generated by the front wheels. The front louvers reduce the pressure within the front wheel arches, increasing downforce. At the rear, large cut-out sections behind the rear wheels also reduce wheel arch pressure, boosting downforce. Coupled with the high-set rear wing and rear diffuser, these elements work in harmony to generate up to 220 kg of downforce.

Available as standard with a six-speed manual transmission, the Exige Cup 430 Type 25 features Lotus’ acclaimed open-gate manual gearbox, designed specifically for fast and fluid shifts. The Lotus Exige Cup 430 Type 25 also includes a variable traction control function, linked directly to the ECU. The six-position rotary switch is located on the steering column, and only active with ESP switched to off, with five pre-set traction levels as well as “off”, displayed via the instrument cluster.

Composite technology plays a considerable role in the Exige’s construction, with every area reconsidered in order to shed unnecessary mass. The car’s composite body panels influence the car’s styling as well as its aerodynamics and include high-gloss visible weave carbon components include front splitter, front clam, air blades, unique bargeboards, roof panel, rear tailgate, straight-cut wing and diffuser surround. The extensive weight saving even extends to the lightweight titanium exhaust system, fitted as standard, which is 10kg lighter than the stainless-steel alternative.

The racing lines continue inside with the Type 25 edition’s unique interior pack. Lotus’ in-house manufactured carbon race seats, trimmed in black Alcantara®, feature bespoke trim, with a custom stripe for the head and backrest as well as new contrast double stitching which is matched in the door panels and face-level vents. Bodywork keyed colour inserts for the seats, transmission console, HVAC surround and window switches are complemented by the cabin’s anodised aluminium and carbon fibre elements, including dashboard inserts and instrument binnacle cover. In a nod to the original Lotus Type 25 Formula 1 car, the Exige Cup 430 Type 25 comes with a wooden gear selector knob.

As standard the new Exige Cup 430 Type 25 includes air conditioning, an in-car entertainment system, including iPod® connectivity and Bluetooth® functionality, cruise control, a full carpet set and floor mats. Buyers can tailor their cars with a colour change of the door mirror caps and with the deletion of some standard fit items, including the air conditioning, stereo system and carpet set.

Announcing the new car, Jean-Marc Gales, CEO, Group Lotus plc said: “Although the Lotus Exige Cup 430 Type 25 is street legal, it blurs the line between road and race car to provide owners with an unbeatable blend of power, road holding, intuitive handling at any speed. On everyday open roads it rewards its driver with a pure analogue experience, like only a Lotus can, yet venture onto the track and you’ll find a depth in performance that only the very best driver can truly exploit. Like the Lotus Type 25 in 1963, this car is without any rival.” 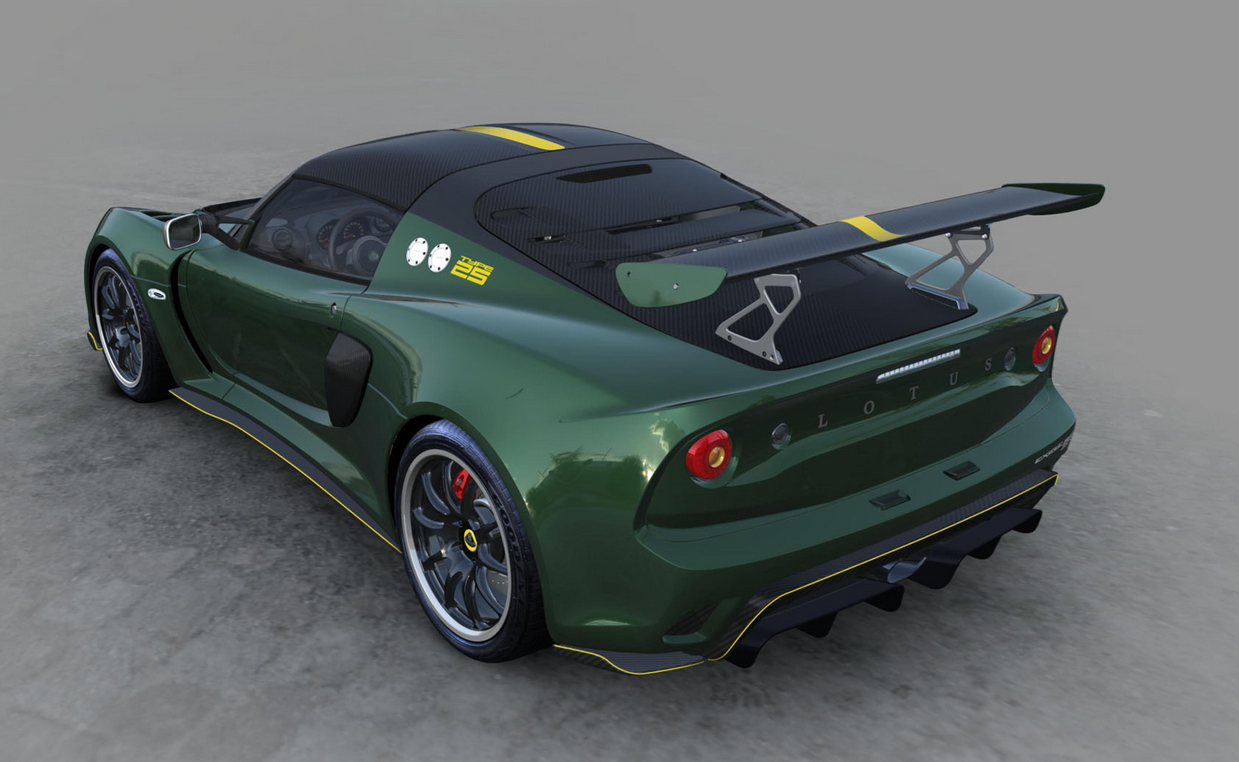