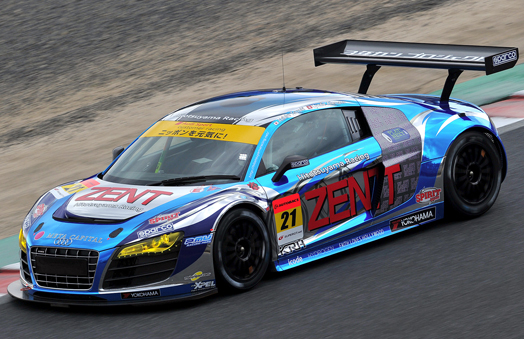 Hillsborough born sportscar racer Richard Lyons has just announced a new race deal, which will see him compete in the last 3 remaining races of Japan’s Super GT series and the end of season JAF Grand Prix at Fuji. The deal allows Lyons to compete in this weekends Fuji 300km R6/8  and continues his relationship with Zent Hitotsuyama Racing, driving their Audi R8 LMS in the GT300 class.

The Autobacs Super GT Series is Japan’s premiere race series with the GT300 class providing vigorous racing and will see Lyon’s Audi battling it out with the GT marques of Aston Martin, BMW, Corvette, Porsche. The outcome of the races can change drastically depending on the weather, track condition and as Fuji is referred to as a high-speed track due to its layout. It should offer fans a thrilling and powerful race as there should be more overtaking than other circuits.

In recent times Lyons has joined Hitotsuyama Racing for testing duties at Fuji Speedway, with the team seeing dramatic improvements through Lyon’s vast experience of racing sportscars in Japan. Lyons further impressed a few weeks ago when he joined the teams regular drivers Akihiro Tsuzuki and Cyndie Alleman for the Pokka 1000KM at the iconic Suzuka race track. Lyons commented “ We had a really good race coming from 18th to 3rd and closing rapidly on 2nd place only to have a fuel system problem with 14 laps to go and slipped back to take 14th place at the chequered flag.”

Even though Richard is involved in a global sport he was recently spotted at his home circuit of Kirkistown. Where he was on hand helping out testing Philip Shield’s Breezemont Motorsport GP2 car and lapped the circuit in 47.62 setting a new fastest ever lap beating Dan Daly’s official lap record of 51.431s.