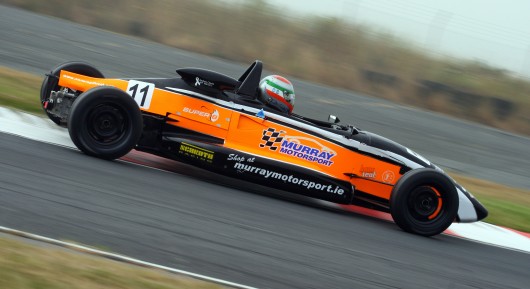 Niall Murray from Dublin has been selected as the 2013 Dunlop Motorsport Ireland Young Racing Driver of the Year. The award, which carries a prize of a fully funded season of racing in Formula Ford along with the prestigious Sexton Trophy, is awarded annually with the support of Dunlop, Motorsport Ireland and the Irish Sports Council. Niall has previously raced for two seasons in the British Ginetta Junior Championship before making the switch to the highly competitive Formula Ford Championship for the 2013 season. He had a very successful first year in the series which cumulated in wining the prestigious Formula Ford Festival at Brands Hatch, this race has been previously won by several past and present Formula One drivers.

Other award winners on the day included Derek Tohill who was awarded International Driver of the Year. Derek successfully won the FIA European Rallycross Championship in the Touring Car class and will compete in the Supercar category for 2014. The Billy Coleman award for Young Rally Driver of the year was presented to Stephen Wright. Stephen had a successful year with victory in the Production Class in the Irish Tarmac Championship and in both the Donegal International Rally and the Cavan round of the Dunlop National Series. He will receive €50,000 worth of support for the 2014 season, when he intends to compete in the Belgian Rally Cup.