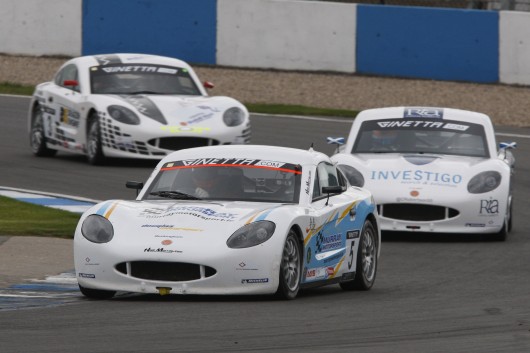 Niall Murray continued his strong form from Brands Hatch and scored another fantastic victory at round 3 of the Ginetta Junior UK series at Donington. This leaves Murray in second position in the championship with everything to play for at the next round in Thruxton on the 28/29 of April.

Preparation for qualifying was not exactly smooth for Murray. Free practice was a little frustrating as budget restrictions meant Murray was forced to sit out the two additional practice sessions available on Thursday. On Saturday, Murray was also forced to sit out free practice as he incurred electrical trouble on his first lap of the session. Given these issues, Murray put in a strong qualifying performance to line up 5th on the grid, only 0.17 of a second off pole position for race 1.

A fantastic start in the opening race saw Murray move from fifth to first in one lap. The former Ginetta Junior Ireland Champion battled for the lead with George Gamble for the entire race. On lap seven Murray got a run alongside Gamble on the uphill run to the fast Copse corner but as Gamble turned into the apex Murray’s car was already alongside and contact was made. As a result Gamble ran off the circuit and as he tried to rejoin he was collected by the chasing pack of cars. This resulted in several cars being damaged and the race was stopped. As the race had run over half distance, Murray was declared the winner and picked up his second win of the season.

During the post race enquiries on Sunday morning Niall was handed 3 penalty points but was still awarded the race win. Murray commented, “I am delighted with my second win of the season but I feel the three penalty points were extremely unfair. I made a fair move on George and it was unfortunate that contact was made.”

Niall lined up in 8th position for race two on Sunday. Another fantastic start saw him move to third after lap one. On lap three he passed Charlie Robertson to take second position. Towards the end of the following lap, Robertson made contact with the back of Murray’s car twice at the final chicane and pushed him into a spin. Murray rejoined in a lowly 9th position. However never one to give up, Niall fought back through the field. On lap 7 Murray tried to make a move on Robertson at the Old Hairpin but contact was made under braking resulting in Robertson going off the circuit. Murray later finished the race in 6th position. After the race

Robertson’s team lodged an official protest against Murray and he was later excluded and given a very harsh 4 penalty points. Niall commented after the decision “I was running bumper to bumper with Charlie through the Craner Curves and as I attempted to move to the inside of the circuit for the Old Hairpin, Charlie broke much earlier than I expected and I caught the rear of his car. For the second time during the weekend I was given penalty points and this time it was four. I had to admit it was my mistake but I think it is very unusual for 4 points to be handed out.”

Rounds 5 & 6 of the series moves to Thruxton on the 28/29 of April, the fastest circuit in the UK. This is a circuit where Murray showed strong pace in free practice in previous weeks resulting in him topping the time sheets.