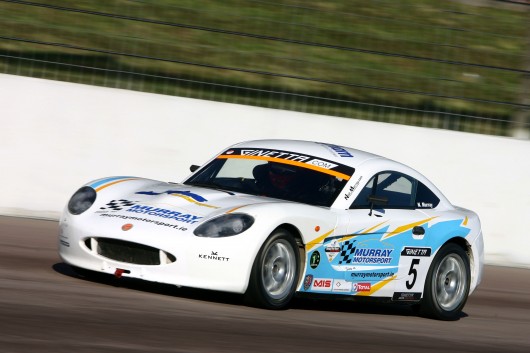 On the back of a weekend that came good with second in race two at Knockhill in August, Niall Murray approaching Rockingham, the home circuit of his Douglas Motorsport team, knew that its race wins he needed to put him back at the top of the championship table.

Friday’s practice was a wet affair and once again highlighted the controversial tyre debate as the leading drivers ran new wet tyres for each of the sessions. However despite running on older tyres, Niall Murray in his KENNETT supported Ginetta G40 posted the second fastest time in the morning session followed by third fastest in the afternoon’s second session.

Saturday morning greeted the drivers with clear sunny sky’s so it was slicks all round for the opening free practice session of the day. However Murray struggled for outright pace during the session feeling his car was simply down on top end speed. Despite reviewing the car with his Douglas Motorsport team it became apparent in qualifying that the problem had not been resolved. Niall qualifying a lowly seventh for both of the weekends races, was naturally disappointed but as we have seen on many occasions this season, Niall is certainly a driver capable of grabbing a big result despite starting slightly down the order.

Off the line for race one Niall got a superb start and the tightly bunched field headed into the first corner. Niall had his car hugging the inside of the pack and leaving the corner was now up to fifth but contact from Freddie Lee damaged the young Irishman’s steering rack. Niall was now down to tenth at the end of the opening lap and left with a lot of work on his hands to get back to the head of the field. Murray got his head down and on lap two moved up to seventh passing Oliver Basey-Fisher and Freddie Lee. Contact between championship rivals Fielding and Robertson allowed Murray to challenge the latter for sixth but Niall was now struggling to keep the car on track due to his steering rack woes. Murray now got into a good rhythm and set about keeping with the leading pack as he tried to reel in his team mate Andrew Watson who was now in sixth. Towards the end of the race Murray had closed the gap to less than one second and on the final lap Niall found a way past at the end of the main straight to move into sixth which he would hold for the remainder of the lap to take the chequered flag.

Lining up in seventh for race two, Murray was hoping for better fortunes in race two to keep his championship challenge alive. A superb start off the line set Murray in good steed for the run down to the first corner. Once again Murray hugged the inside of the track and exiting the first corner was now up to fourth. Up ahead, Niall was looking to Ollie Chadwick for third and keen to get passed as quickly as possible. Crossing the line Murray put an excellent run together and a superb move up the inside of Ollie at the first corner put him into third. With leaders Fielding and Robertson now having opened a small margin, Niall set about chasing after the lead pair. However Pepe Massot was now ahead of Chadwick and on lap six was side by side with Murray across the start/finish line to move into third. However Niall was now right on his bumper and keen to get back into the podium places. Murray who now appeared to be a master of the first corner passes got another fantastic run on Massot to slip up the inside at the first corner and back into third. However on the back straight Massot was now along side the Douglas Motorsport driver on the outside but Murray was hoping he could hold the line coming to the final corner. However contact between the pair allowed fifth place driver Ollie Chadwick to pass the pair and move into third with Niall managing to hold onto fourth crossing the finish line.

Speaking about the weekend, Murray expressed his natural disappointment at not coming away with any podium finishes. “Naturally it’s been a disappointing weekend for us at this crucial point in the championship. We really needed two podium finishes this weekend at the very least to keep us in the title race. However, there is still four rounds to go, and as we saw with Sennan finishing down the order yesterday, anything can still happen. So as the saying goes, its not over until the fat lady sings, and I’m certainly not giving up! It’s been a busy weekend for my Douglas Motorsport team so I would like to say a special thanks to them for all their efforts. Of course my sponsors who continue to give me wonderful support, Murray Motorsport, KENNETT and P1 Digital have been wonderful all season.

The Ginetta Junior Championship moves to Silverstone for the penultimate weekend of the season for rounds 17 & 18.