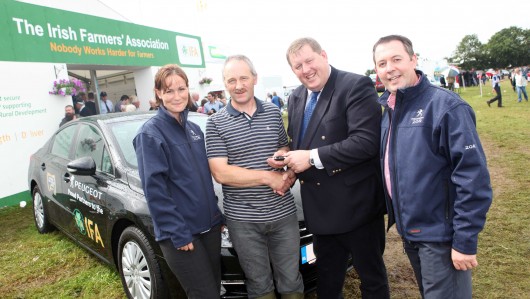 A lucky Noel Donohoe from Tinahely, Co. Wicklow was announced as the winner of the IFA’s national competition for a Peugeot 508, valued at €25,000. His prize was announced at the recent Tullamore Show. There were a total of 58 people across the 29 IFA County Executives randomly shortlisted from the IFA membership system for the competition. Peugeot and the IFA have a motoring partnership which includes a €250 rebate on Peugeot purchases and a special €99 service rate for IFA members. Commenting on the announcement, Des Cannon, Peugeot Sales and Marketing Director said: “Our partnership with the IFA has been extremely successful in the first year, attracting many new buyers, across all models, to the Peugeot brand and securing new business for our Dealer workshops. Hearty congratulations to Noel on winning his quality new Peugeot 508, Continental Irish Family Car of the Year 2012.”