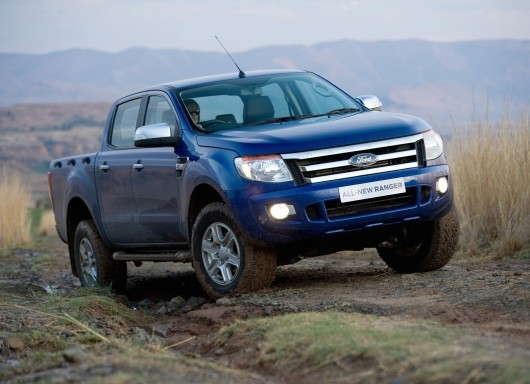 Over the years we have tested numerous crew cabs, but this week’s test drive is the third generation Ford Ranger, it was highly anticipated to say the least. Ford has been in this sector for many years, but more often than not played second fiddle to the Toyota Hilux, Isuzu D-Max or indeed the more recent VW Amarok. Stateside it’s the other way around with Ford cleaning up each year with the successful F range of pickup trucks which is loved by so many. With this in mind Ford appears to have borrowed some American flair for its latest Ranger and produced what has to be the best looking crew cab for sale on Irish roads. The sheer proportion of the Ranger is what strikes you first with excellent ground clearance and a real muscular stance. It’s not hard to see why this pickup became the first crew cab to be awarded a 5 star safety rating by the Euro NCAP testing body as it looks almost bomb proof from any angle.

Inside the cab, it’s more car-like with all the creature comforts you would expect to find in your everyday saloon. The model we are testing is the Limited version that comes complete with Bluetooth, iPod connectivity, voice control radio, CD, USB, and electronic air-conditioning. There is also dual-zone climate control and cruise control for those long motorway journeys. The electronic heated seats in the front offer good comfort and the driving position is excellent with a rather commanding view of what lies ahead. This new Ranger is 5,359 mm long and 1,850 mm wide, making it much bigger than its predecessor but with that excellent visibility and rear parking sensors you won’t be worried. 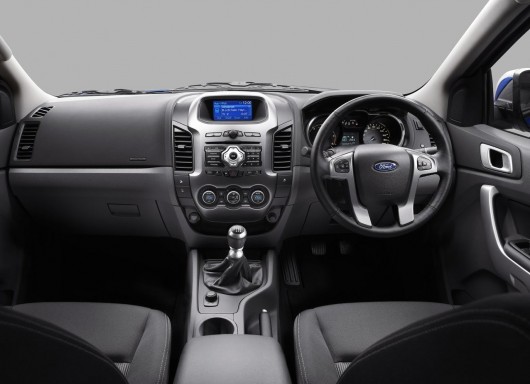 To drive, the Ranger feels potent but still very much truck like. The 197hp 3.2-litre diesel that’s powering my test vehicle feels powerful but noisy on the motorway. Gear changes through the six-speed manual transmission are smooth at the top end but you do get that drivetrain engage jerk in low gears in city traffic. Where this engine seems to really come into its own is when towing. The Ranger can tow up to 3,350 kg on selected models and we hitched it up to our show trailer, which weighs in at two ton. From the off, the Ranger felt strong using all 470Nm of torque to make light work of our trailer. Ford state it will actually carry over a ton in the rear also which is very impressive. 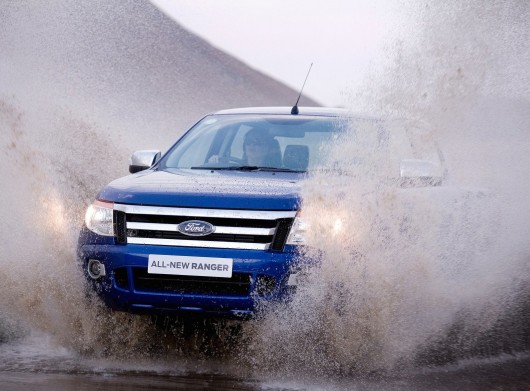 The next big question was, would it be any good off road? Most of these vehicles are either used on a site or a farm so it’s important that this great towing capacity is matched by good off road capabilities. Ford state that the Ranger can tow more, carry more, wade deeper and climb higher than its competitors so we tested it in the same place we conducted a recent crew cab test. Sadly conditions were rather different in the fact that it was bone dry but nonetheless we picked some challenging hill climbs, scary descents and obtrusive angles to drive the Ranger over. First off I engaged the electronically controlled transfer case, which allows you to shift on the fly from 4×2 to 4×4 high anytime via a knob on the centre console. The Ranger felt sure-footed at all times and experienced no loss of traction. Ground clearance is exceptional at 229mm and if we could find some water, its wade depth is an impressive 800mm. That’s 100mm more than a Land Rover Discovery!

Overall, we enjoyed our time with the Ford Ranger. Looking at it parked on a farm, construction site or outside a nice restaurant this crew cab doesn’t look out of place. It feels robust on the road, tows impressively and laughs in the face of rough terrain. With single and double cab options to choose from along with three powertrains, 2.2 TDCi 125HP and 148HP; and 3.2 TDCi 197HP there has to be a Ranger to suit you. Ireland’s best-looking pick up can be purchased from €25,194 up to the top of the range model priced at €42,294. 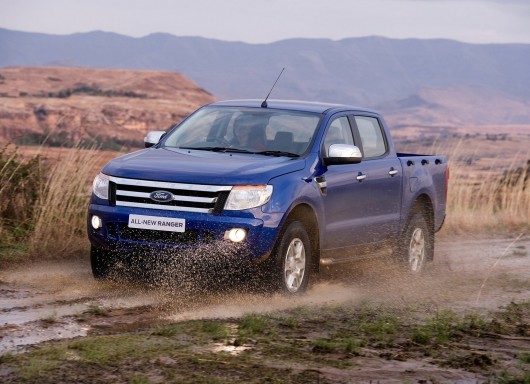