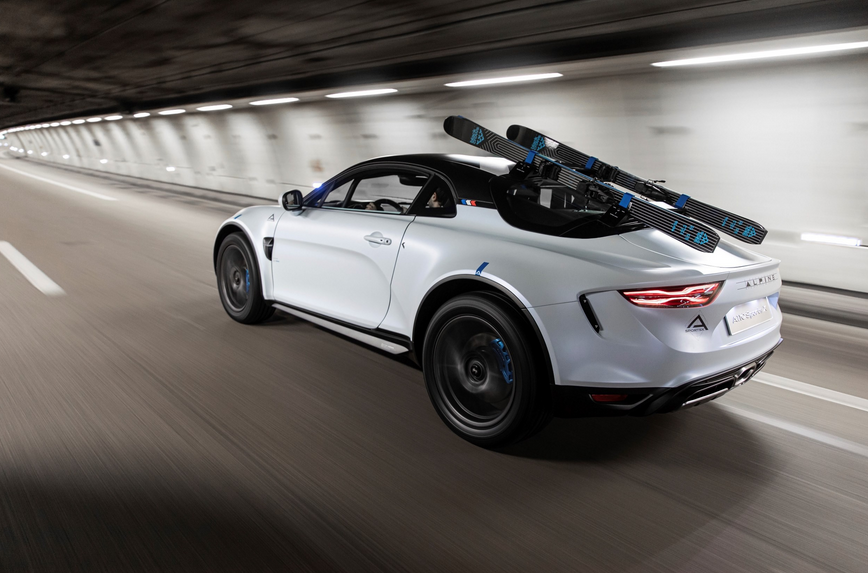 One year after the Renaulution plan, Luca de Meo, CEO Renault Group, and Laurent Rossi, CEO Alpine, announced that production of the future GT Alpine X-Over will be based at the Dieppe plant. The announcement was made in the presence of Bruno Le Maire, Minister of Economy, Finance, and Recovery, and Esteban Ocon, Alpine F1 Team driver. Symbol of French manufacturing and innovation, the Alpine site in Dieppe is like no other in the Group. The event marks a new milestone in the brand’s development ambitions and showcases its plans to ensure a long-term future for the historic site.

In an effort to continue developing high-performance sports cars and bolster its international footprint, Alpine successfully combines a passion for racing with technological excellence, in particular thanks to bridges built with the world Formula 1. Driven by a unique commitment to motorsports and the bold image it conveys, Alpine has set the bar high with a broader range of all-electric products in the pipeline.

The brand’s new product plan is ambitious. Introduced in early 2021, Alpine’s strategic plan outlines the development and launch of three all-new electric sports cars – a compact car, a crossover, and a new version of the A110 – by 2026.

The very first GT Alpine X-Over will be made at the historic plant in Dieppe. This new model will combine the brand’s competitive know-how and the group’s experience in electric vehicles, with all the excellence in sports vehicles that defines the Alpine brand. The arrival of the all-electric GT X-Over will require investments at the Dieppe site to adapt the site to the latest CMF-EV platform and set up new facilities, the goal being to produce a vehicle with features and equipment like no other on the segment. As such, it will become the first all-electric vehicle to be made in Normandy (France).

The project is part of the ‘Re-Nouveau France 2025’ plan that was unveiled in December 2021 and which places France at the heart of the Group’s industrial and technological activities, highlighted by the fact that nine new models will be made in factories located throuhgout France. It has also been the subject of an ambitious ‘CAP 202’ performance agreement which will help get the site ready for the new vehicle.

‘MANUFACTURE ALPINE DIEPPE’, A NEW NAME FOR A HISTORICAL PLANT

Renault’s industrial plant has been renamed Manufacture Alpine Dieppe, a name that embodies the know-how and high level of quality that characterizes the facility. Like watchmakers, Alpine offers and will continue to offer vehicles that are at the pinnacle of automotives, designed and produced with the level of precision to be expected of the finest craftsmen in their field.

Alpine is Dieppe, Dieppe is Alpine!

The unique, historic relationship is set to last for years to come thanks to a commitment to a sustainable future and a strongly-growing business.

Seen as a crowning-jewel of French automotives, Alpine proves time and time again that it holds high ambitions for automotive excellence.

Luca de Meo, CEO Renault Group: “Over the past twelve months, Alpine has succeeded in setting a new dynamic in motion and upholding its commitments. It can be seen today in Dieppe where the future GT Alpine X-Over will be made, thus giving a clear vision of the future and solid prospects for the historic, industrial site. Alpine’s ambition must remain high, where only the most passionate strive to be, those driven by the quest to attain perfection. This level of excellence must be like oxygen for Alpine.”

Laurent Rossi, CEO Alpine: “Alpine’s history is legendary! Its unique heritage can be seen in car racing with the equally legendary A110, and the future holds strong ambitions for the brand and its products. The announcement of the upcoming GT X-Over being made at the Manufacture Alpine Dieppe is proof that the future is being written in a location of historical importance for Renault.”