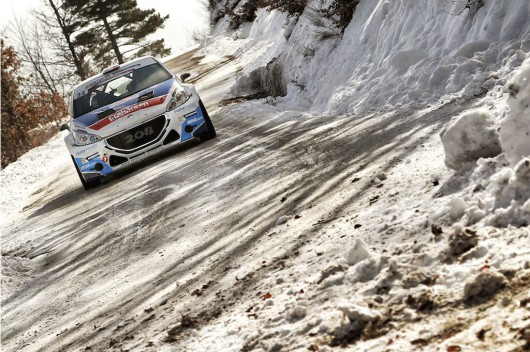 Peugeot Rally Academy driver Craig Breen has finished the Monte Carlo rally in second position, driving his SAINTéLOC Racing run 208 T16. When the nine times world rally champion comes to the end of the first stage and gives an account of how difficult the conditions were you can take his word for it and for Craig it was the same, in disbelief as to how tricky it was to navigate the 208 T16 safely through the icy night stage. The Peugeot Rally Academy driver was more comfortable on the stage that followed and managed third fastest time just 2.9 seconds off stage winner Eric Camilli to arrive at the overnight halt in Gap fourth in the WRC-2 standings. It was French driver Stéphane Lefebvre that led the way into the first loop of stages on DAY 2 (Friday) Lots of ice and mud on them was spread around by the leading World cars and it made the road surface even more treacherous for Craig and the rest of the WRC-2 entries. Although the times steadily improved during the day Craig and the SAINTéLOC Racing team struggled for set-up perfection and ended the day as they started, 4th. As the opening stage of DAY 3 was cancelled on safety grounds that meant the crews were faced with one huge 51.7km stage before service.  The stage though mainly dry had ice patches in the shady areas just waiting to catch the drivers out and when Craig reached the end of the stage he was clearly deflated when he found that he was over a minute down on the best WRC-2 time. It was from that moment on that his rally was transformed. Changes made by the team engineer in the midday service gave Craig the car he had being trying to find since the beginning of the rally. Right from the next stage the Peugeot Rally Academy driver was on the pace and although he had slipped back to fifth at the end of the day there were three more stages on Sunday morning and only twenty seconds dividing him and the second step on the podium.

It was all on nothing as the final day kicked off and the excitement was palatable. It was going to be a battle between Craig, Camilli and Martin Koci to catch second placed Armin Kremer in the hope of stealing his position. Camilli drew first blood on the opening stage of the day with Craig just over four seconds in arrears but on the next stage everything turned on its head when not only did the Peugeot Rally Academy pair blitz the time sheets to catch and pass Kremer by one second but Camilli and Koci had cracked under pressure and put themselves out of the fight. Craig cemented his position by going fastest again on the final stage to take his first podium this year and with it eighteen valuable championship points. Craig and Scott now return to their Peugeot Rally Academy duties in the FIA European Rally Championship where they move on to round two in Latvia.

You can keep up to date with Craig’s 2015 season by visiting www.craigbreen.com  or www.peugeot-sport.com