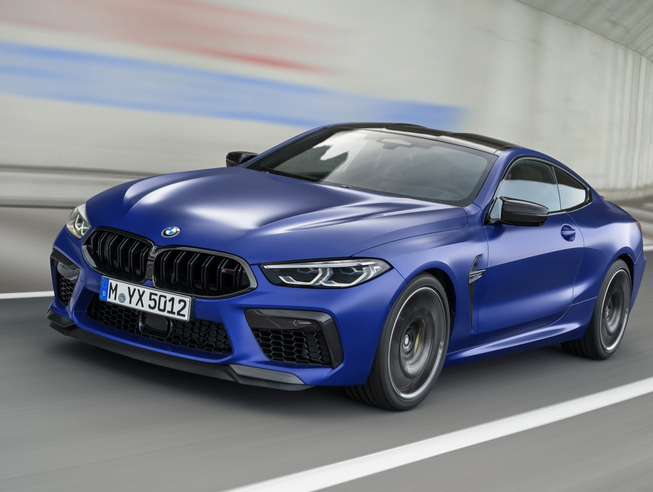 The BMW M8 Competition will be seen for first time in the UK at the 2019 Goodwood Festival of Speed. The new high-performance sports car, fitted with M Performance Accessories, will take to the hill along with another exciting offering from BMW – the BMW X4 M Competition – BMW M’s all-new Sports Activity Coupé. A trio of cars from BMW’s past will also steer their way up Goodwood’s famous 1.16-mile course to celebrate the theme for this year’s festival: ‘Speed Kings – Motorsport’s Record Breakers’.

Featuring the most powerful engine ever developed for a BMW M GmbH car, a high-revving V8 unit with M TwinPower Turbo technology developing 625hp, the BMW M8 Competition Coupé sprints from zero to 62mph in 3.2 seconds and from zero to 124mph in 10.6 seconds. Visitors to the festival will see the car roar up the hill in the ‘Supercar’ category whilst its BMW M sibling, BMW X4 M Competition, will be seen and heard in the ‘First Glance’ category. Powered by the latest M TwinPower Turbo technology, with its cylinder head core manufactured using 3D printing, the 3.0-litre in-line petrol engine generates 510hp and a peak torque of 600Nm – with a dual-branch exhaust system to help to deliver an intoxicating soundtrack.

Goodwood’s hill climb will witness runs from three famous cars from BMW Group Classic. The BMW V12 LMR with a 580hp 12-cylinder engine, that celebrated overall victory at the 1999 Le Mans, will be driven by one of the UK’s best ever international racing drivers – Steve Soper. Alongside the V12 will be the BMW M3 E30, the most successful touring car ever fielded by BMW Motorsport, and the BMW 328 Mille Miglia Touring Coupé. In 1940, this car took overall victory at the Mille Miglia in a then record time.

Festival goers will not only be able to see BMW models in action but also on display in the ‘BMW Boulevard’, a unique area at Goodwood the Stable Yard once again dedicated to BMW. It will showcase the latest expressions of luxury from the BMW brand including the new BMW M8 Competition Convertible, the BMW X7 M50i and BMW M850i Gran Coupé. The cars will also be presented on a curated runway, whilst visitors will be able to enjoy refreshments in the ‘Behind the Boulevard’ hospitality area.

Giving valuable insight into the new design language of the BMW Group will be Matthias Junghanns, Head of BMW i Interior Design, and responsible for the BMW iX, Vision I Next and Vision M Next design concepts. Junghanns, who managed the debut of the BMW X7 and other luxury models within the BMW Group, will be able to share his philosophy and design direction in a series of interviews at the ‘BMW Boulevard’ on Friday (10.00am, 2.00pm and 4.30pm) and Saturday (11.30am, 2.00pm and 3.30pm).

The home of the marque during the festival will be ‘BMW M Town’ – offering an unparalleled array of BMW product and experiences and epitomising the festival’s ‘Speed Kings – Motorsport’s Record Breakers’ theme. The stars of the stand will be the historic BMW M1, the exciting new BMW M135i , BMW M340i and BMW X3 M Competition – BMW M’s new midsize SUV – along with an out-of-this-world BMW M850i Night Sky.

Visitors to the stand will be able to experience the thrill of the BMW Motorrad Rolling Road and pre-invited guests can also relax in the exclusive trackside ‘VIP ROAR Club’. The latest BMW Motorsport collection will be available, along with a chance to see the new BMW M Bike and a BMW M2 Competition Taxi fitted with carbon accessories. Drivers and guest stars will make appearances throughout the festival, with live interviews and autograph sessions running every day – with a series of live performances that will bring ‘BMW M Town’ to life.