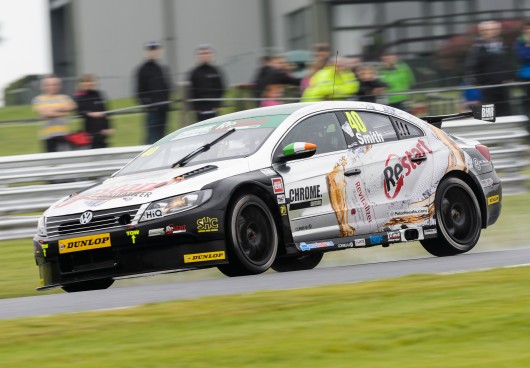 Aron Smith took his maiden victory for Team BMR yesterday at OultonPark race circuit in the British Touring Car Championship. Smith’s weekend got off to a difficult start in Saturday mornings free practice sessions. Struggling to find the optimum balance in his Chrome Edition Restart Racing Volkswagen Passat CC during the wet conditions, a drying track for qualifying provided a silver lining to the morning’s clouds. However ride height failure and red flags meant that Smith had just a couple of minutes to throw together a flying lap at the end of the session. Posting the eleventh fastest time, Smith was confident that he now had a stable car in the dry conditions.

Race one was tame by typical British Touring Car standards. Slipping back in the opening laps to 12th, Árón consolidated his position to the flag. Starting race two in 12th, Smith quickly tucked in behind teammate Alain Menu. However on lap five, contact between Menu and Fabrizio Giovanardi at Hislops, meant that Árón had to instantly dive left across the grass in a superb split second maneuver avoiding the incident and moving into tenth. A safety car during the following laps bunched up the field but the mixed speed nature of the OultonPark circuit prevented any further overtaking opportunities. In the closing stages of the race, Smith benefitted from Nick Fosters retirement before dramatically finding a way past a slowing Sam Tordoff out of Lodge Corner to secure eighth position in a drag race across the line.

The lucky Irishman secured pole from the race three grid position draw, a first for Smith now in his third year in the Dunlop MSA British Touring Car Championship. With a heavy downpour just before the start of the race, it was wets all around as the cars went to the grid. A calm Smith composed himself off the line and performed his best start of the weekend to lead from the first corner. However after just half a lap, the Safety Car was deployed to recover three stricken cars from around the circuit. A stellar restart as the Safety Car pulled off the circuit on lap three allowed Smith to open a slender margin over his nearest rival Gordon Shedden. As Plato, Turkington and Shedden all started to battle for position in his mirrors, the MicksGarage.com supported driver controlled his advantage at the head of the field to cross the line in front of an ecstatic Team BMR crew to win his first race in 2014 and a first for Team BMR.

Commenting on his race victory Smith said, “I am absolutely delighted to win race three here at OultonPark. The guys here at Team BMR deserved this so much as they work so hard in what is effectively a brand new team. The race was great and I got into a good rhythm out in front controlling my pace throughout!”