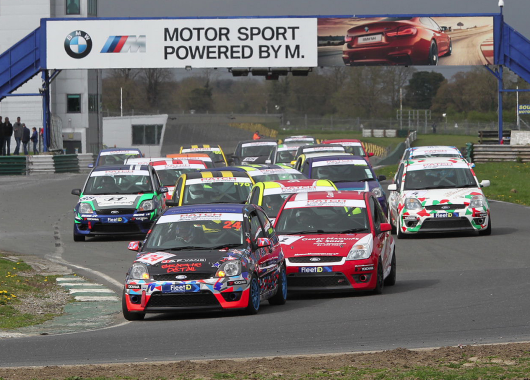 The Mondello Park promoted Fiesta Racing Championships continued to provide the best of the action as the Irish Car Race season continued at Mondello Park this weekend. For once though it was the Mondello Park Fiesta Zetec Championship which featured the closest racing, rather than the faster Patch Tyre Equipment Fiesta ST Championship. Having had to play second fiddle to Mark O’Donoghue for the first two events, Owen Purcell has been the star of the Fiesta Zetec championship ever since. Purcell took his first ever race win at the last event in June, quickly followed by his second at the same event, to start to make inroads into the substantial championship lead held by O’Donoghue. This time around Purcell continued his strong form with a third successive victory, to really put pressure on the series leader. Purcell’s win was comfortable enough by Fiesta standards as he won by a second and a half from O’Donoghue, who was under enormous pressure from class debutant William Kellet. The youngster had qualified second but lost out to O’Donoghue off the start, before chasing him hard for the entire race taking the bonus point for fastest lap on his way to a debut podium.

The second race once again had Purcell and Kellet on the front row but while the race one winner made a good getaway, Kellet dropped back to fifth. O’Donoghue initially ran second but a fantastic recovery drive from Kellet saw him up to third by lap four and past O’Donoghue at two thirds distance. The impressive newcomer once again set fastest lap as he chased down the race leader, but in the end he ran out of laps and Purcell took his fourth win in a row to close the gap to O’Donoghue to just two points. The Patch Tyre Equipment Fiesta ST Championship races did not provide the fireworks we have come to expect, as the lead battle was much more spread out than usual. Race one continued the trend of championship leader David Maguire and second placed Shane McFadden taking the wins, as McFadden strolled to his third win of the season by almost two seconds from Maguire. In keeping with the current championship standings the rest finished well behind with Brendan Fitzgerald, more than six seconds in arrears, grabbing the final spot on the podium from Michael Cullen.

The reversed grid for race two saw the sixth placed driver from race one, Tom Fahy, on pole from ex ITCC racer Paul O’Brien, who had finished an impressive fifth in his first ever Fiesta ST race. Maguire and McFadden sat on row three and it was the championship leader who got the best start to move up one place to fourth while his rival faded to eight place. Up front O’Brien had built a lead of almost a second from Michael Cullen, with pole sitter Fahy next up. Over the first half of the race Cullen and O’Brien ran almost identical lap times as Maguire battled his way up to third, but as the race entered its second half the experienced second and third placed drivers upped the pace to close in on the leader. Pushing extremely hard Cullen got the gap down to three tenths of a second, but O’Brien hung on like a veteran and never gave Cullen a chance to mount a serious attack, as he eventually took a well deserved victory from Cullen and Maguire.

McFadden who started the weekend twelve points adrift of Maguire never really got into a groove and was embroiled in battles all race, leaving him languishing in seventh at the flag. With Maguire only third however, the damage was limited and the two drivers left Mondello Park with the same points gap between them as when the weekend had started, but with an extended margin over the third placed driver, Cullen. The Patch Tyre Equipment Fiesta ST Championship now looks like a straight fight between reigning champion Maguire and McFadden, with just four races left to go. The Mondello Park Zetec series is also a two horse race at it enters its final stages with O’Donoghue and Purcell well clear of the rest. Both Championships will be back at Mondello Park on August 13th for another pair of double headers.