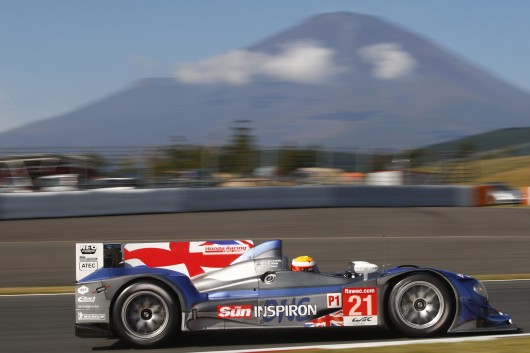 Northern Irelands Jonny Kane has again been in action helping Strakka Racing secure 2nd place in the 2012 FIA World Endurance Championship LMP1 Privateers’ Cup, with the final round of the year (Shanghai, 28 October) yet to come. Kane and the other team drivers Nick Leventis and Danny Watts finished the 6 Hours of Fuji 3rd Privateer and 6th overall. The team’s result at the Fuji International Speedway cemented their championship position currently standing 28 points ahead of its nearest rival, JRM, with just 25 points available.

Kane made a fantastic start in the team’s Michelin-shod HPD ARX-03a at Fuji, only to be backed up by the Audi starting in front of him which allowed both the no22 JRM and no13 Rebellion cars to overtake, dropping him to 7th by the end of the first lap. A superbly timed fuel only first pit stop saw him jump past both (who took on fuel and tyres) to regain 5th position. Kane handed over to Watts, who drove every lap like a qualifying lap to reduce the gap between the no21 Strakka and no22 JRM car from 10 to less than three seconds in the closing stages of his 65 lap double stint. However, the HPD ARX-03a did not quite have the outright pace required to overtake around the 2.83 mile (4.563km) Fuji circuit.

With 2 hours and 25 minutes of the race remaining, Leventis’s main task, during a typically hectic mid-endurance race mix of prototype and GT cars all racing for their own class positions, was to cut through the traffic and push as hard as possible to set Kane up for a podium challenge in the closing stages. This he did brilliantly and Kane, rejoined 27 seconds behind the no13 Rebellion, was able to push the 3rd placed Privateer driver Harold Primat to such an extent that Primat spun off the track with just an hour of the race remaining. This mistake allowed Kane the breathing space to bring the HPD ARX-03a home 6th overall, 3rd Privateer and 3rd in the Michelin Green X Challenge.

Jonny commented: “The start of the race was a bit strange as the Audi ahead of me left quite a big gap to the car in front. I got a really good start but couldn’t pass Neel Jani [no12 Rebellion] until I crossed the start/finish line and I had to back up which meant the no22 JRM and no13 Rebellion got a run on me. We just didn’t have quite enough top speed to get past them on the track but by going to a leaner fuel map when they pitted early and double stinting our tyres we managed to jump them both in the pits. It was another close race today but the biggest thing is that we’ve not only finished third in the race but we’ve also secured second in the P1 Privateers Championship, which is a really fantastic result for Strakka, Danny, Nick and myself and all the boys who’ve worked so hard this year.”