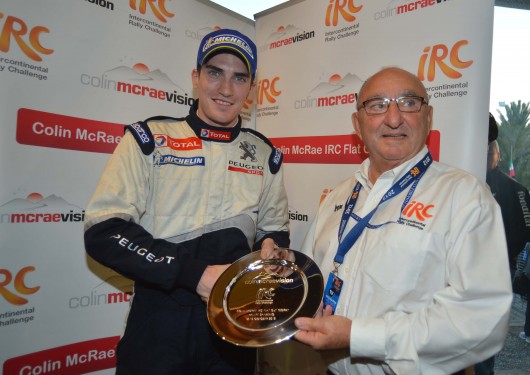 Craig Breen made a successful return to the IRC over the weekend by claiming 6th overall on Rallye Sanremo. It was Breen’s first time competing in Italy since his best friend and former co-driver Gareth Roberts lost his life in an accident on Targa Florio-Rally International Di Sicilia in mid-June. For his endeavour and performance he was awarded the prestigious Colin McRae, IRC Flat Out Trophy.

On the finish ramp Craig said, “I’m delighted to have made the finish ramp here in Sanremo. This has been a very difficult week for me, my first time back to drive the Peugeot 207 and my first time in Italy since the accident. Driving on the same type of roads brings back so many memories of that day in June. I’m very happy with my performance, it was a pity to pick up the puncture this morning, I’m sure we could have secured a position or two higher only for that. I’m honoured to receive the Colin McRae award, he was a huge figure in the sport and it’s my ambition to follow in his footsteps. I would like to thank, the organisers of the rally, the IRC, Team Sainteloc and my co-driver this weekend Paul Nagle.”

The iconic tarmac event based in northern Italy, this year celebrated its 54th running by taking place within a twenty five hour window. The rally started on Friday afternoon with the opening three special stages. Then on Friday night the organisers scheduled the highlight of the event, a 44km monster stage which ran under the cover of darkness. The rally resumed on Saturday morning with for the final day’s action with a double loop of three tests.

With three consecutive seventh fastest, stage times, Breen was seventh overall after the Friday afternoon loop in his Saintéloc Racing Peugeot 207 S2000 and as darkness fell the Irish driver gave the ecstatic Italian rally fans a glimpse of his budding talent as he went third fastest on the 44km Ronde stage, finishing the day in fifth place.

The rally resumed on Saturday morning and Breen initially moved to fourth position after stage five but when battling Italian driver Stefano Albertini, picked up a front-left puncture approximately four kilometres into the 20.73-kilometre Colle d’Oggia (SS7). As a result the Irish crew dropped three minutes and were thwarted in their early morning attack. In midday service Breen said, “It was 500 metres after a village packed with spectators and I was too tight into the corner and got the puncture, I’ll see what the feeling is before we decide if we push this afternoon but just finishing the rally would be a bigger achievement than anything else.”

Going into the final three stages the 22-year-old was 2m08.5s behind Italian champion elect Paolo Andreucci but this did not discourage the Peugeot driver from pushing all the way to the finish and on those three closing tests he rounded off an impressive performance with third fastest stage times on eight and ten, and second fastest on stage nine.