Home Motorsport News Can the Luck Of The Irish Hold For 24hrs? 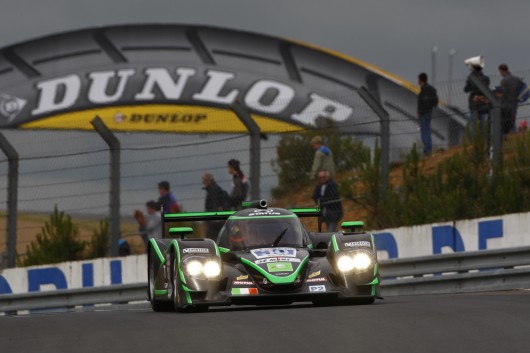 This weekend see’s the 80th running of the historic sportcar race “Le Mans 24 Hours”, with the most Irish interest there has ever been. The Irish continent is made up of 2 Irish teams Murphy Prototypes who will be running Jody Firth, Warren Hughes and Brendon Hartley in their Oreca Nissan LMP2 and Status Grand Prix with their LMP2 Lola-Judd B12/80 Coupe. Ulsterman Jonny Kane also has driving duties with UK team Strakka Racing.

Status Grand Prix first started out in 2005/6 as A1 Team Ireland which competed in the A1 GP World Cup Race Series. The team showed early success by winning the 2009 series with Irishman Adam Carroll. Unfortunately Status’s last competitive outing didn’t go quite to plan and ended in disaster in Spa Belgium when their race car was all but destroyed in a heavy high speed impact. So they’ve brushed themselves down and came away from the pre 24hrs Test Day having completed 52 laps (more than 700 kilometres) and qualified all three drivers for the big race.

Britain’s Alexander Sims, a Le Mans and sportscar rookie, set the team’s fastest time of the day to finish 12th in the ultra-competitive LMP2 class with a lap of 3m44.110s. A bid by Dutch team-mate Yelmer Buurman – another Le Mans and sports-prototype newcomer – to go quicker still at the end of the day was scuppered by a red flag. Frenchman Romain Iannetta played himself back into Le Mans, a race he has not contested since 2009, to complete a satisfactory day for the team.

Status GP technical director Rob Arnott commented on the test day “Everything went fine today. We did a lot of laps and the car functioned fine. We had to change a fuel pump but apart from that we had very few technical issues. The drivers were very pleased with the balance, such that in the afternoon we did not attempt any quick times at all. We just worked on strategy – our day’s programme was to evaluate tyre compounds and fuel mileage. We are pretty happy with our direction.”

Lastly but the most completive package out of the 3 is Jonny’s berth at Strakka Racing who are fielding an all-British driver line up in the 56 car entry. Comber born Jonny will be joined by Nick Leventis (London), and Danny Watts (Buckingham). Strakka Racing achieved everything it set out to do in the official test session, successfully running its Honda Performance Development ARX-03a through its entire pre-planned schedule and finishing the day as fastest petrol engine car and top privateer entrant.

On the day Great Britain celebrated the Queen’s Diamond Jubilee, the Union Flag on the Silverstone-based team’s LMP1 prototype flew proud and fast as it topped 200mph (321kph) along the famous Mulsanne Straight, as the all-British driver line-up of Nick Leventis, Jonny Kane and Danny Watts set a 3:34.243 best around the 8.468 mile (13.629km) Le Mans track. Out of a field of 61 cars, the time secured 7th fastest overall, which was only surpassed by the four works Audis R18s and two works Toyotas.

The excellent test leaves the Silverstone-based team in the best possible position heading into the Le Mans race weekwith Jonny commenting “When I first went out onto the track, it wasn’t as dirty and slippery as I thought it was going to be, and as our beacon wasn’t working properly I wasn’t getting the correct lap times in the car and was actually going quicker than I thought I was. The car felt good straightaway, and when we altered the rear wing it felt even better. It rained a couple of times during my stints, but I took it easy, didn’t make any mistakes and as a team achieved pretty much everything we set out to do.”

Strakka Racing has a good record at Le Mans. Having won the LMP2 class and finished 5th overall in 2010, the aim this year is to challenge for the top‘pure’ petrol engine car position as well as best privateer team. Indeed, after strong performances in the opening rounds of the FIA World Endurance Championship (the 12 Hours of Sebring and the 6 Hours of Spa-Francorchamps), Strakka Racing is lying 2nd in the 2012 FIA Endurance Trophy for the best private LMP1 team. Le Mans is Round 3 of the series, and scores double points.