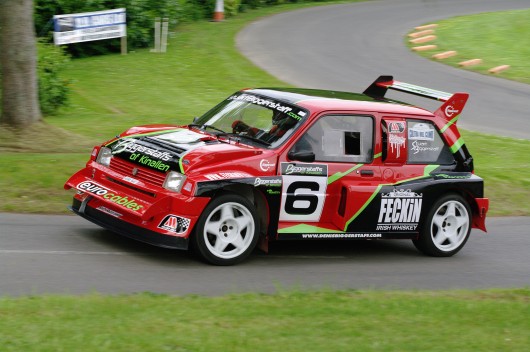 On Saturday the 2nd of June, 1800 visitors to the Ulster Folk Museum and motorsport fans alike were treated to the annual running of the Cultra Hillclimb. The event utilizes the parkland setting for the 700 yard hillclimb course and the historic Cultra Manor as a display area. The Thoughbred Sports Car Club NI organizised event celebrated the 50th Anniversary of the MGB sports car and the engineering work and legacy of Ulster’s Harry Ferguson and Rex McCandless, through the theme of 4WD. Both the anniversary and tribute were reflected in the demo’s, display’s and in the entry list for the hill climb itself.
With all the displays in place the competitive element of the day got underway early morning, with the 80 entries covering 6 classes being treated to a dry sunny course. An incident free morning on the hill saw the field get through their two practice runs with the demo runners also being allowed a run, adding to the unique atmosphere of the event.
The theme of 4WD was excellently demonstrated on the hill through the appearance of a varied support cast of cars with the most unique being the 1960 Ferguson P99 F1 car driven by Stuart Rolt, Chairman of the British Racing Drivers Club and son of Tony Rolt, winner of Le Mans and competitor in the Dunrod TT. In 1961 the car became the only 4WD to win a F1 race and would also become Stirling Moss’s last win in Europe and the last by a front engined car.

It was then left to the Cultra Manor House to become the main focal point for the 50th anniversary of the MGB with a timeline reflecting the most significant model changes over the last 50 yrs. The 30 cars on display were kindly supplied by the members of the MG Car Club and the MG Owners Club in NI. Also placed in front of the manor was a display of ten rare or unique vehicles employing 4WD systems with the Museum rolling out its’ two most recently restored exhibits, the last remaining McCandless 4WD racer and his Mule military prototype. Finishing the scene a Ferguson Aeroplane replica and 1904 DeDion vintage car were parked on the Manor lawn.

With the conclusion of the morning’s runs the action didn’t stop, with the lunch break being utilised for an Autotest demonstration which was held on the hillclimb course beside the Manor. This proved to be a big hit with the public and an excellent way to showcase this motorsport entry level discipline to the crowd. In the same vein during the day several Sporting Trials cars wandered effortlessly up and down the side of the Glen and through the site’s woodland area.

After lunch the hill switched back into competition mode and as the competitors got more and more dialled into the hill, times started to fall. One of the standout appearances of the day was the competition debut at Cultra of Denis Biggerstaff’s 1986 MG Metro 6R4 which was excellently driven by his son. Stuart, the 2010 NI rally champion, won class E for modified saloons, took 5th overall in 34.16sec and was the fastest rally car.

A new class record was created for a Formula One car at this historic event, as the 1960 Ferguson P99 F1 car took part in the last timed run. Gear selection gremlins restricted Rolt to a lowly 40.71sec, netting 10th in class and 48th overall. Though this class record could stand for a few years whilst the resourceful TSCC work on attracting another car from the top echelon of the sport. Dungannon’s Seamus Morris, the defending champion, took overall hill honours in his Pilbeam MP62 single-seater with a 31.63sec runa couple of tenths outside his 2011 record time. Second overall was NI Hillclimb Champion Graham Thompson’s GTR Turbo, the Antrim man never bettered his first timed run of 32.48sec. Ballymoney’s Rudi Gage rounded off the top 3. With no other Libre Saloon opposition in the field, multiple NI Saloon Champion Gage was forced to compete in the top Libre class with the single-seater racing cars. He absolutely threw his space-framed Maguire Mini, often on three wheels, at the twisty and technical Cultra course and was rewarded with another Outright Saloon Record of 33.28sec and was best placed TSCC member.

TSCC President William Heaney (Cultra Event Co-ordinator) said afterwards:- “Working with our Ulster Folk and Transport Museum partners, Cultra Event continues to develop. This year we trebled the size of the static display at Cultra Manor and added another demonstration element. It’s encouraging that the competition entry has stabilised in these tough economic times enabling us to now offer Class Awards. I’d like to thank the competitors and participants for their continued patronage, and the management and staff in the Museum for their co-operation, contribution and encouragement. The ongoing advice, guidance and support of North Down Borough Council Tourism underpins this young event which could not happen without all the volunteer marshals, officials and other staff that it requires to run a safe motorsport event these days.”