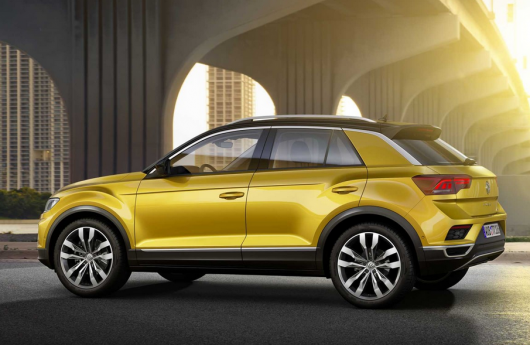 The Volkswagen Group handed over 998,900 vehicles to customers worldwide in March, corresponding to a fall of 4.3 percent compared with March 2018. In Europe (+0.6 percent) and North America (+3.7 percent), more customers took delivery of a vehicle from one of the Group brands than in the same month last year.

However, this could not compensate for lower deliveries in the Asia-Pacific region (-9.9 percent) and South America (-10.2 percent). Dr. Christian Dahlheim, Head of Volkswagen Group Sales, commented: “As was the case in the first two months of the year, the Volkswagen Group again performed better than the global market in March and won further market shares. This confirms the great appeal of our brands and their products.

We ended what was, as expected, a challenging first quarter with deliveries exceeding 2.6 million vehicles and high order backlogs, and are somewhat more optimistic, particularly as regards the second half of the year.”

Deliveries in the regions in March developed as follows:
In Europe, Volkswagen Group brands delivered a total of 483,100 vehicles, representing a slight increase of 0.6 percent on the same month last year. In Central and Eastern Europe, 69,900 customers took delivery of their new vehicle from one of the Group brands, 3.6 percent fewer than in March 2018. In Western Europe, Group deliveries grew 1.4 percent to 413,200 vehicles. In the home market of Germany, deliveries were 2.4 percent higher than the previous year, with 133,100 vehicles handed over to customers there.

There was also positive momentum from North America, where deliveries rose by 3.7 percent to 87,000. At 8.2 percent, growth in the USA was even stronger, with 62,500 customers taking delivery of their new Group vehicle. 15,100 vehicles (-7.8 percent) were delivered in Mexico, where the overall economic situation remained difficult.

In South America, deliveries fell by 10.2 percent to 45,500. Brazil, the region’s largest market, recorded growth of 3.9 percent. 33,700 vehicles were handed over to customers there. Overall economic conditions in Argentina remained difficult, with Group brands handing over 6,400 vehicles to customers, a sharp fall of 49.0 percent. Nevertheless, the Group also saw slight growth in its market share there.

In the Asia-Pacific region, Group brands delivered 352,700 vehicles, 9.9 percent fewer than in March 2018. In China, the region’s most important single market, the cut in the VAT rate that came into effect in April, combined with the trade conflict with the USA, heightened the reluctance to buy in the month under review. However, the 9.4 percent drop in deliveries by Group brands was less significant than shrinkage in the overall market, and the Group once again grew market shares. In total, 324,900 customers took delivery of a new vehicle in China. 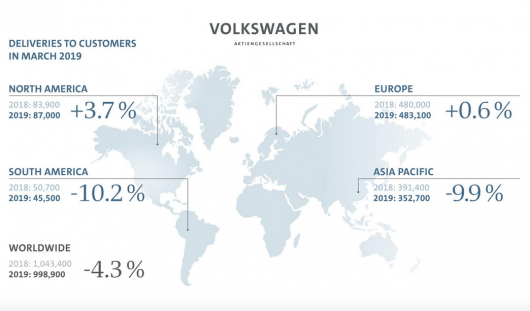