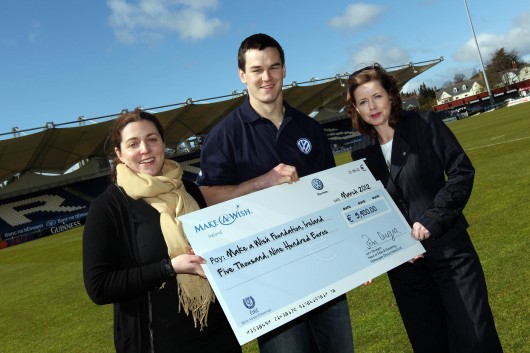 Ireland Rugby International, and Make-A-Wish® Ambassador Jonathan Sexton help raise €5,900 for the charity through the ‘Kicking for Charity’ campaign in partnership with VolkswagenIreland. VolkswagenIrelandagreed to donate €50 for every kick (drop goal, conversion or penalty) and try that Jonathan scored for the 2010 season. This has resulted in Jonathan raising €5,900 for the charity of his choice, Make-A-Wish®Ireland, with whom he has worked with since 2009 as an Ambassador. Commenting on the announcement Jonathan said “I was delighted to become an Ambassador for Make-A-Wish in 2009, and am thrilled to be associated with such a well known and outstanding charity.  I am delighted that my hard work, as part of my 2010 rugby campaign playing for Leinster andIreland, has paid off and helped raise €5,900 for Make-A-Wish.  I know that the funds raised will make magical wishes for special children come true.” Make-A-Wish grants the wishes of children aged between 3 and 18 years living with a life-threatening illness. Since its inception in 1992, Make-A-Wish inIrelandhas granted over 1,400 wishes.