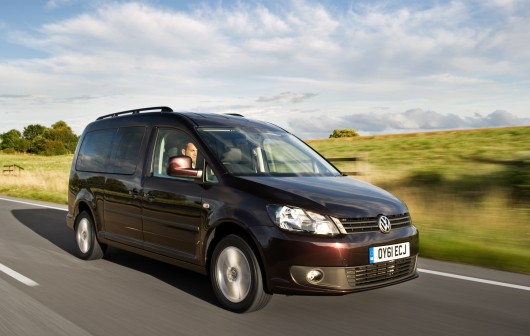 In June 2012 we moved office from Sandyford over to Grange Castle Dublin 22. We didn’t have a massive amount to move so I opted for a medium sized van from a rental company, which turned out to be a VW Caddy. Initially, I thought it might be a little small but when I collected it I found it had ample space and was well appointed inside.

The Caddy panel van I hired was the Type 2K body, which was launched in 2004, and shares 50% of its modules with the Volkswagen Golf Mk5 and Volkswagen Touran, but now has the 2010 Golf facelift. After two runs from the old office to our new premises I had grown to like the Caddy. The 1.6 TDI engine offers sufficient power, returns impressive economy and didn’t feel all that van-like to drive. Fast forward almost one year to the day and here I am experiencing that same feeling in the Caddy Maxi Life. Volkswagen has a massive range of vehicles to choose from but if I said to you to purchase a 7-seater you probably wouldn’t be familiar with the Caddy Maxi Life. Starting at €30,020 the practical Caddy Maxi has been extended 470 mm longer and the wheelbase measures 3,002 mm with much more load capacity. I was at the unveiling of the Maxi at the 2007 Frankfurt Motorshow and watched as a hoard of outdoorsy type drooled over its spacious girth. Practicality is key with this vehicle and aside from the seven-seater option, you could also opt for a camper version, it comes equipped with swivel captain seats, a table, and roll-out awning. 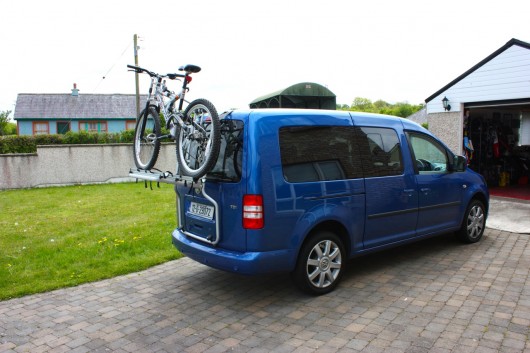 My Caddy has been well spec’d also with electric heated mirrors, heated insulating glass, cruise control and parking sensors. Externally, the Ravenna Blue paintwork is striking over the 17-inch alloys and the tinted rear glass makes it more VIP than MPV. The Maxi I had was also fitted with a factory fit bicycle carrier so in true vacation form I loaded wife, baby, the mountain bike, the Cocker Spaniel and the buggy and headed for Glendalough for a Sunday afternoon. 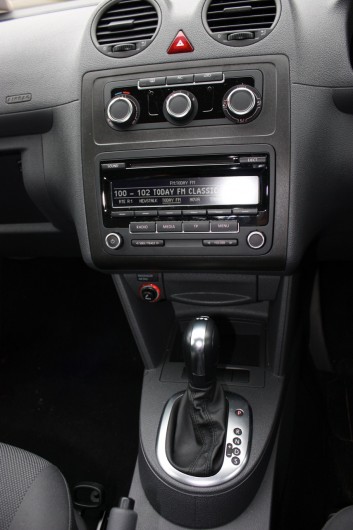 Cruising over the Wicklow gap the 7-speed DSG gearbox really came into its own making the journey a pleasure. The frugal 1.6-litre 102 BHP engine still returned over 40mpg on the demanding roads, which was very impressive. On arrival to Glendalough I noticed the Caddy certainly turned heads. With hoards of tourists getting ready to tackle the mountains I was asked by a German couple if they could have a closer look and judging by their reaction I think they were well impressed with the overall space and layout of the Caddy Maxi Life.

For me, the Caddy was a break from the normal and I certainly enjoyed my week with it. We are lucky enough to spend time with all sorts of cars but when something van-like comes along it certainly captures you attention. At first it’s raised eyebrows, then it’s a rye smile followed by that feeling of contentment. Is this the 7-seater for you? It certainly could be. 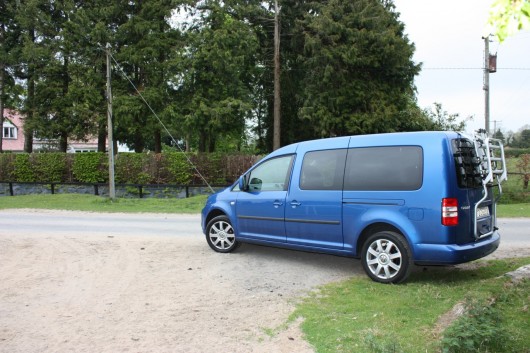