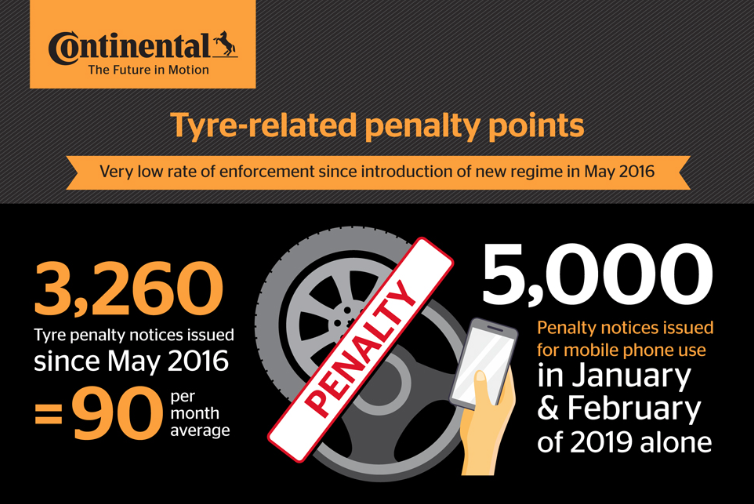 A new penalty point regime for tyre safety came into force in May 2016 – and research examined by Continental Tyres since then shows only 3,260 tyre penalty notices have been issued, an average of just 90 per month. Compare this with nearly 5,000 notices for mobile phone use in just the first two months of 2019 and the safety implications for road users are concerning.

Commenting on the figures, Tom Dennigan of Continental Tyres Ireland, said: “Given the crucial impact on safety that tyre condition can have, it is very concerning to see the low level of enforcement of tyre-related penalty points across the country. Particularly worrying are the statistics for the number of drivers penalised for having tyres with less than the legal limit of 1.6mm tread depth. Over the three years, a total of 450 drivers have received penalty points for driving on tyres that have less than 1.6mm of tread depth, that is an average of 13 cars per month.”

Mr. Dennigan continued: “Continental Tyres own studies of tread depth levels consistently show that on average one in six cars on Irish roads are driving on at least one tyre with a tread depth below the minimum legal level of 1.6mm. That would equate to approximately 350,000 cars that are illegally driving on dangerously worn tyres. This is backed up by what we are hearing from our tyre dealer customers around the country”.

John Whelan who runs JW Tyres in Carlow town, said: “Day in, day out, we are seeing cars at our depot on seriously damaged or worn tyres below the legal 1.6mm of tread depth. We do our best to explain to the driver how unsafe bald or damaged tyres can be – you don’t know when one will cause a blowout. But sometimes the driver is adamant that they do not want to or can’t afford to replace the tyre. Bottom line is that there are many, many more cars out there on illegal tyres than reflected in the penalty point statistics”.

At the other end of the country, Barry Monaghan of Donegal Tyres in Donegal town also commented on the number of dangerous tyres that he sees on cars coming into his depot: “We are also seeing a high number of cars on tyres that would fall foul of the tyre-related penalty points if a Garda checked them. On occasion a driver will ask for a puncture repair on one tyre while two or three of the tyres on the car could be below the 1.6mm legal tread depth and, in spite of us pointing out the danger of driving on such dangerous tyres, in many cases the driver opts to take their chances. Such cars, to me, are ticking time bombs, you don’t know when or where a seriously worn or damaged tyre will fail”.

Continental Tyres analysis of the tyre-related penalty point regime was carried out as part of Continental Tyre Group’s commitment to its Vision Zero strategy, a long term initiative to reduce accidents through tyre technologies and innovative automotive systems.

Mr. Dennigan concluded: “In common with road safety campaigners across the country, we welcomed the introduction of the tyre safety penalty point regime. However, if the measures are not enforced, we are missing a huge opportunity to improve road safety”. 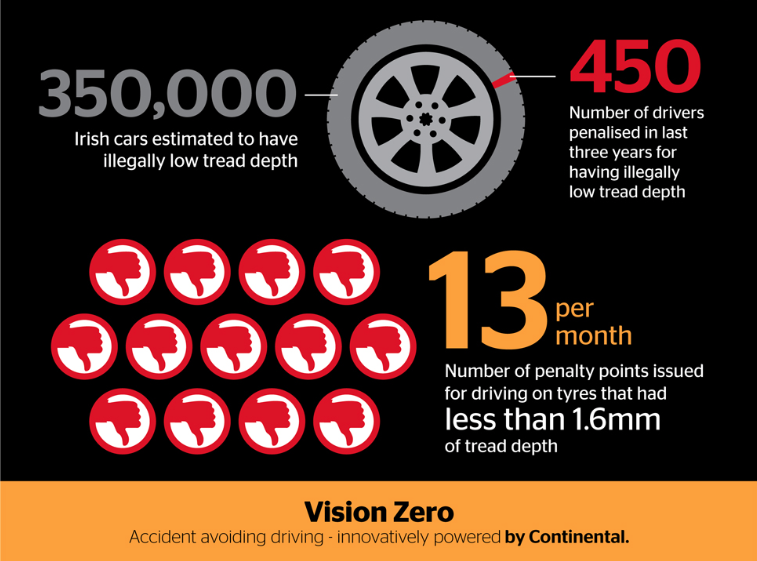