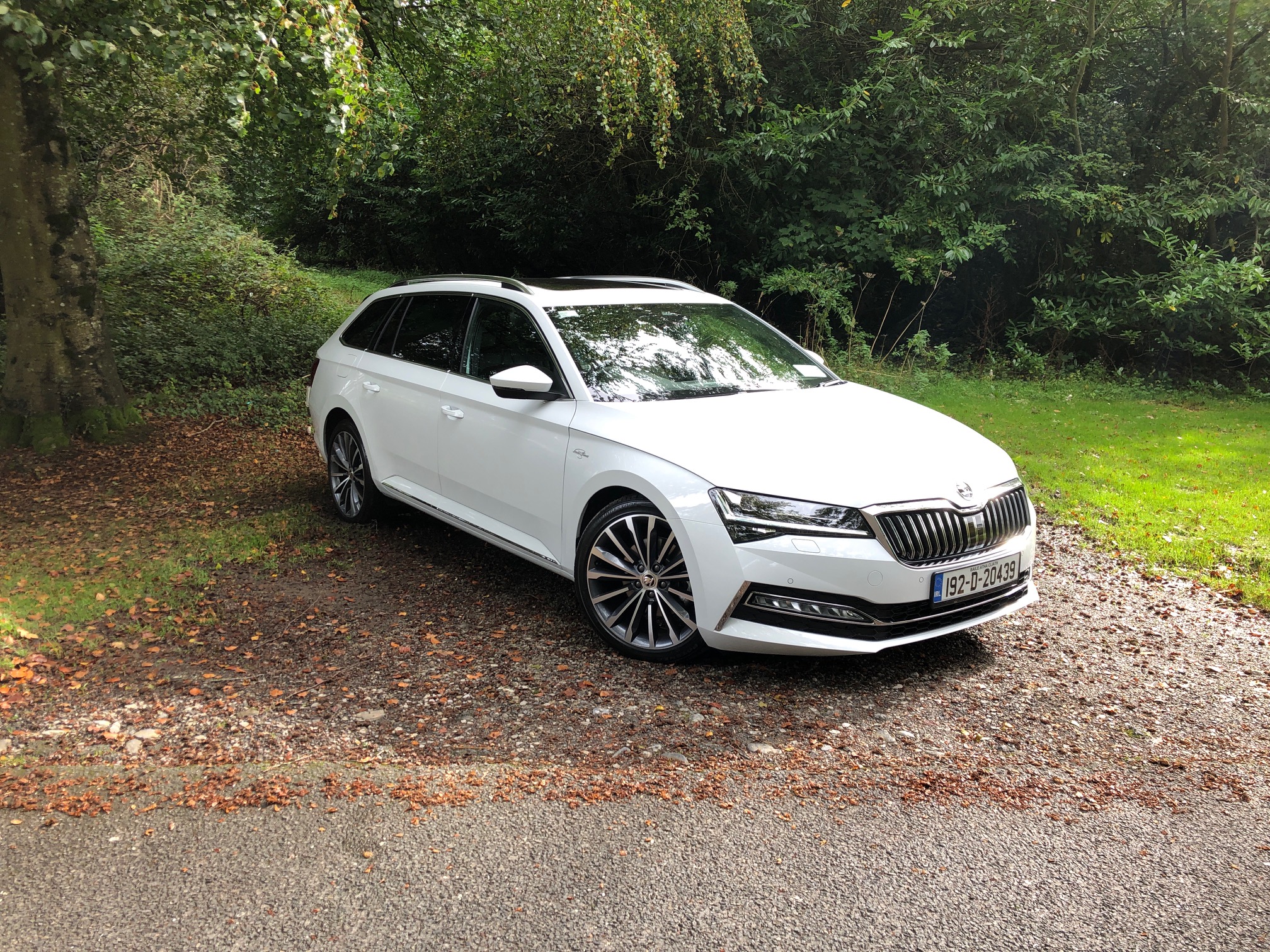 Yesterday we took a couple of hours out of the office to visit Carton House for the launch on the new flagship Škoda Superb. Now a firm favourite family, fleet and taxi car the Superb was launched in Ireland back in 2001 and has amassed over 18,000 sales making this car one of Škoda Ireland’s success stories. This is the third and most successful version that has been given a refresh both inside and out. Our test car at Carton was the Superb Combi Estate and what a good looking car it is! The nose has a redesigned front bumper making it a shade longer and the typical Škoda grille now has a more modern look with double slats and fresh LED Matrix style headlights. At the rear, you notice new badging and a horizontal chrome trim that connects the full LED tail lights with Audi-esque scrolling indicators. 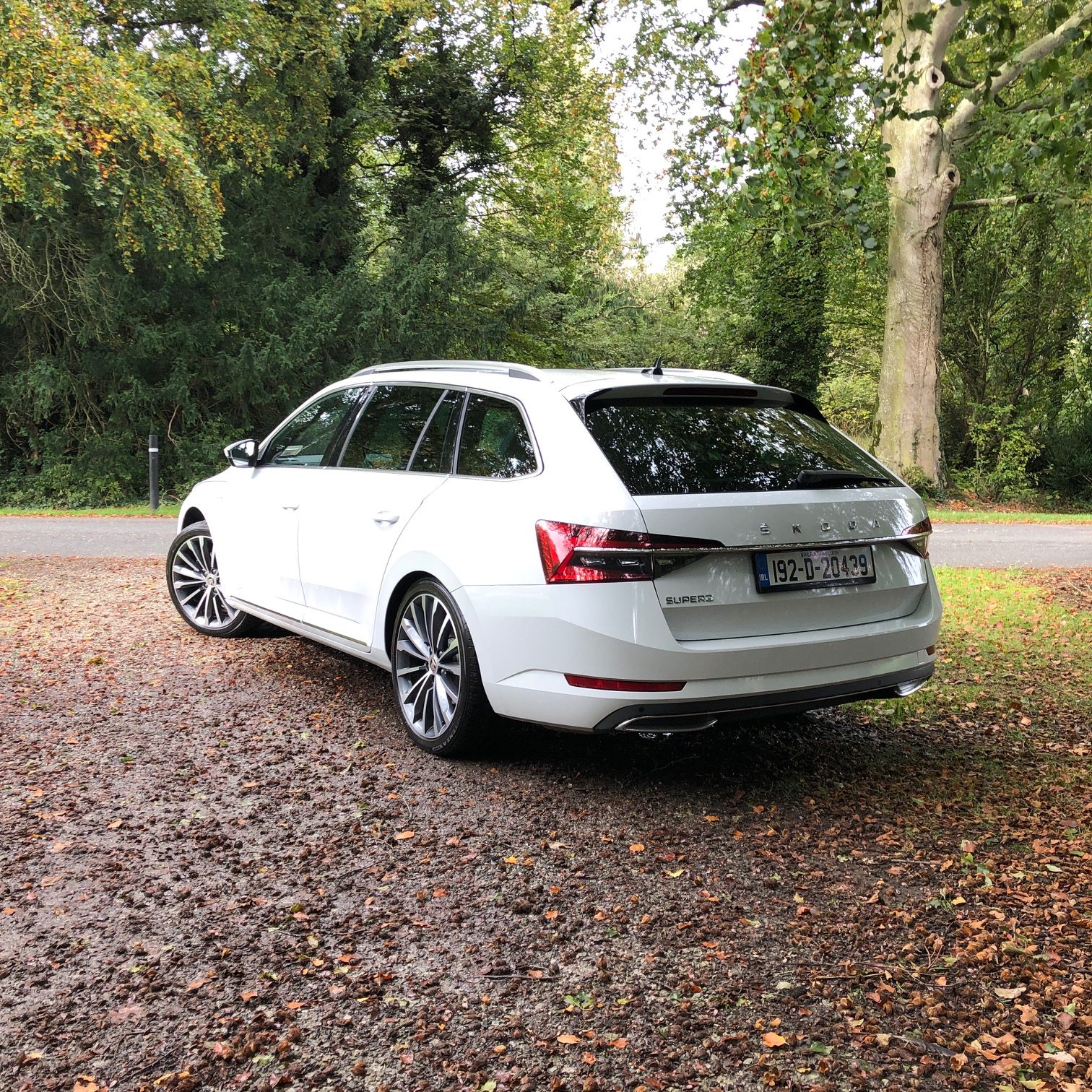 Inside it is the same sea of space as its predecessor with 625 and 660 litres of luggage capacity in the Lift back and Combi respectively and leg room normally reserved for cars of twice this premium. My test vehicle was the top level ‘Laurin & Klement’ edition with stunning leather throughout and a powerful 2.0 TDI 190bhp engine with DSG transmission. To say it drives well is an understatement. It has ample performance right through the rev range and handles flawlessly on motorway or threading the surrounding back roads of Carton House. Other engine options include a 2.0 TDI 150bhp with new turbo charger and intercooler configuration combined with new crankshaft/injector arrangement. A 1.6 TDI 120bhp 7-speed DSG is also an option or the 1.5 TSI petrol unit producing 150bhp with either manual or automatic transmission. Several new assistance systems are also making their debut on this new model such as Predictive Cruise Control. 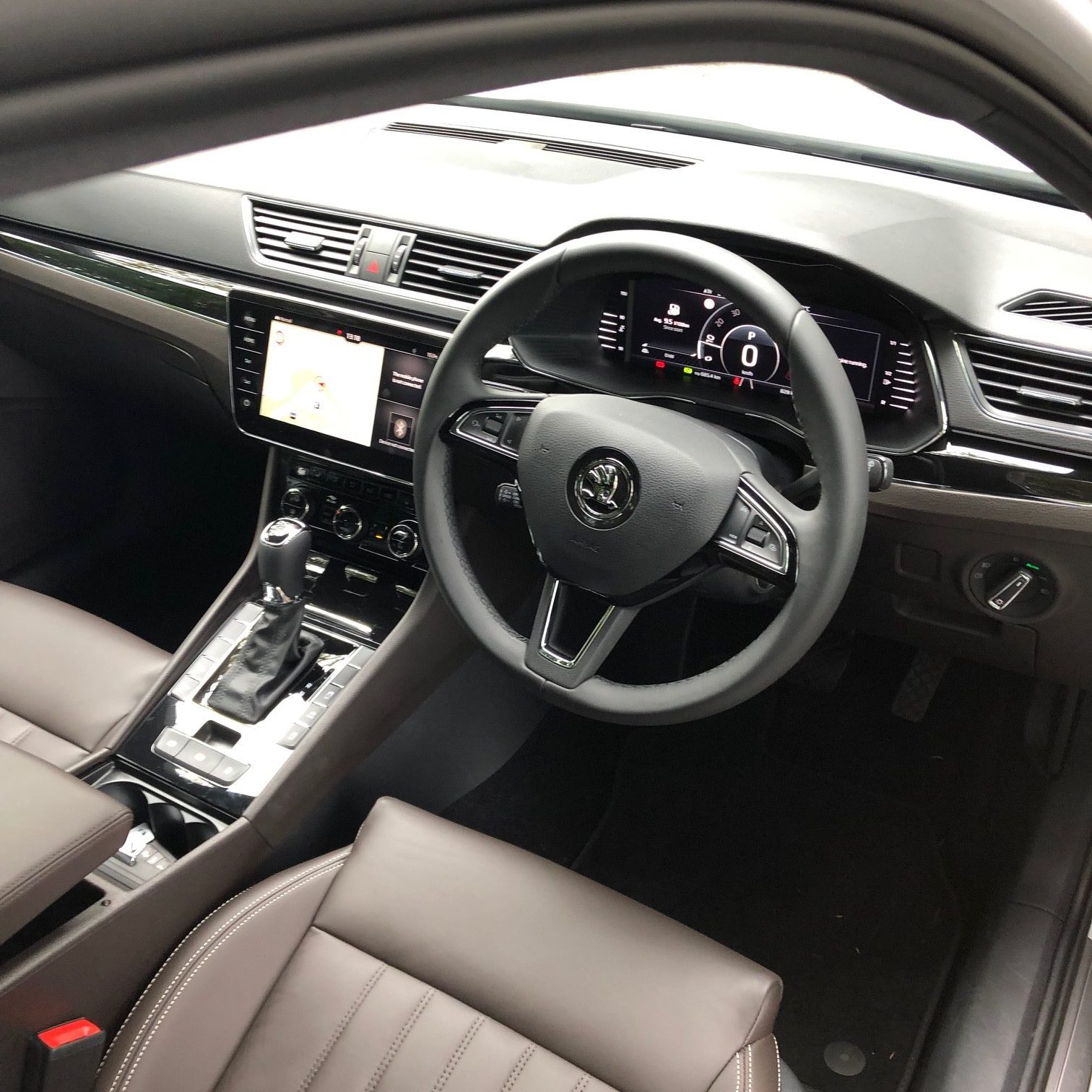 Škoda Ireland confirmed that only 3% of Superb’s sold are the entry “Active” version with the majority of customers tending to go for heavily specified models such as the Style, SportLine and L&K. The Superb SportLine in particular differentiates itself from its siblings using striking black features including a remodelled radiator grille and 18-inch alloy wheels, both of which come in black. The radiator grille frame and the trim between the full LED tail lights is also gloss black. Full LED Matrix headlights and a sports chassis, which has been lowered by 10 mm, are included as standard. The black interior sets itself apart with sport seats featuring Alcantara/leather materials. The top trim level L&K, offers identical dimensions but the grille, side sills and rear bumper feature new chrome details. It can also be identified by the ‘Laurin & Klement’ lettering on the front wings which has been tradition with this top of the line model. 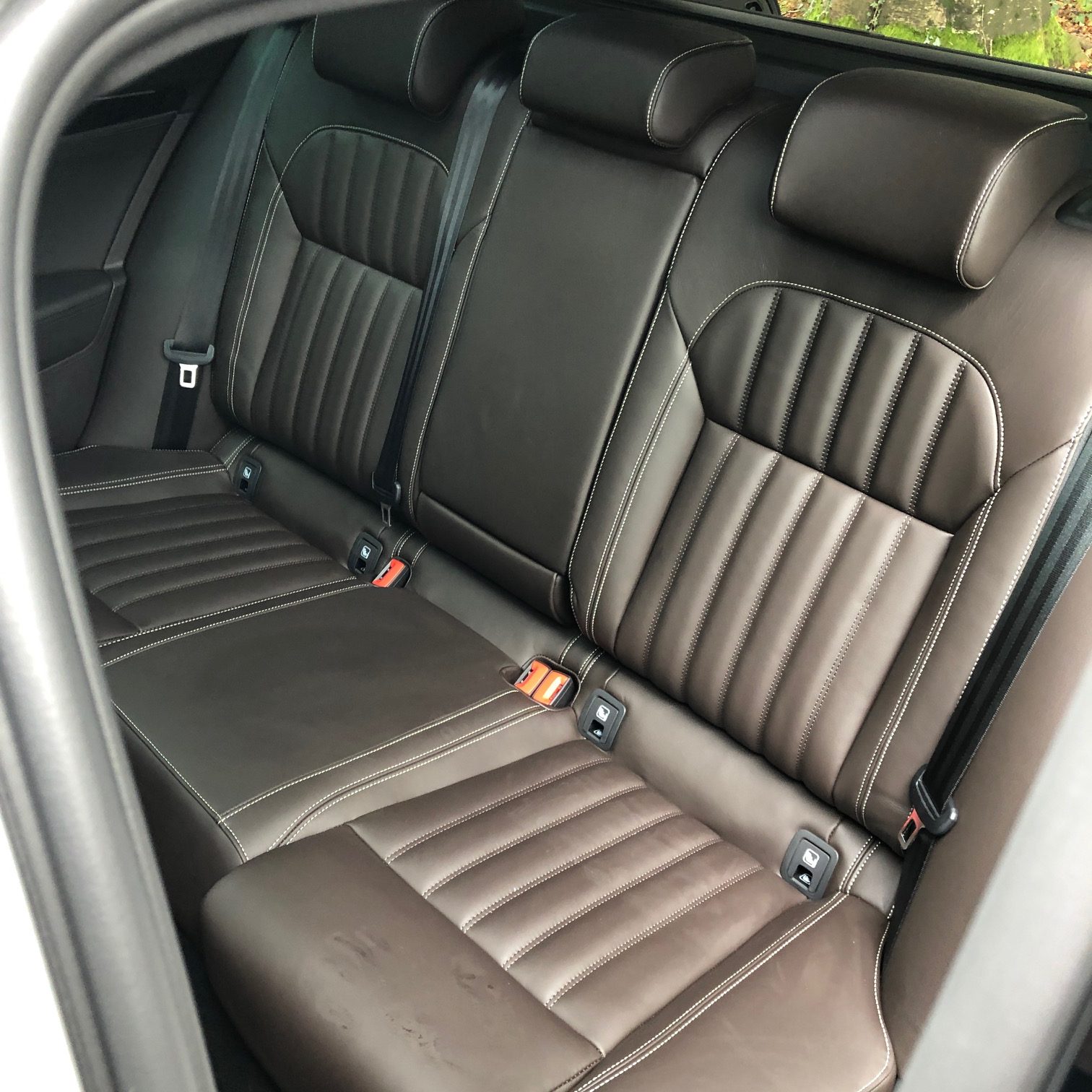 Over lunch the head of marketing and product Ray Leddy mentioned how important the Superb had been in the brands evolution here in Ireland. He believes this third incarnation of the Superb has to be a contender for the number 1 position in the segment after overtaking many of the traditional bestsellers in years past. Thanks to its reliability and excellent residual values the Superb has been a major success with business and fleet customers, with 23% of Superb sales being attributed to this channel. He see’s used imported premium German cars from 12-48 months as the Superb’s biggest competitor and we tend to agree. The big question is, would you prefer to drive a two year old premium car or a brand new Superb? We know where we would spend our money! This new Superb will be hitting dealers from 12th of October with 1.5 TSI, 150bhp Active prices kicking off at €30,750 and PCP finance available from 0% up to the 31st October. Our test vehicle was priced at €49,750 but it is what you might call “Premium” in every sense of the word! 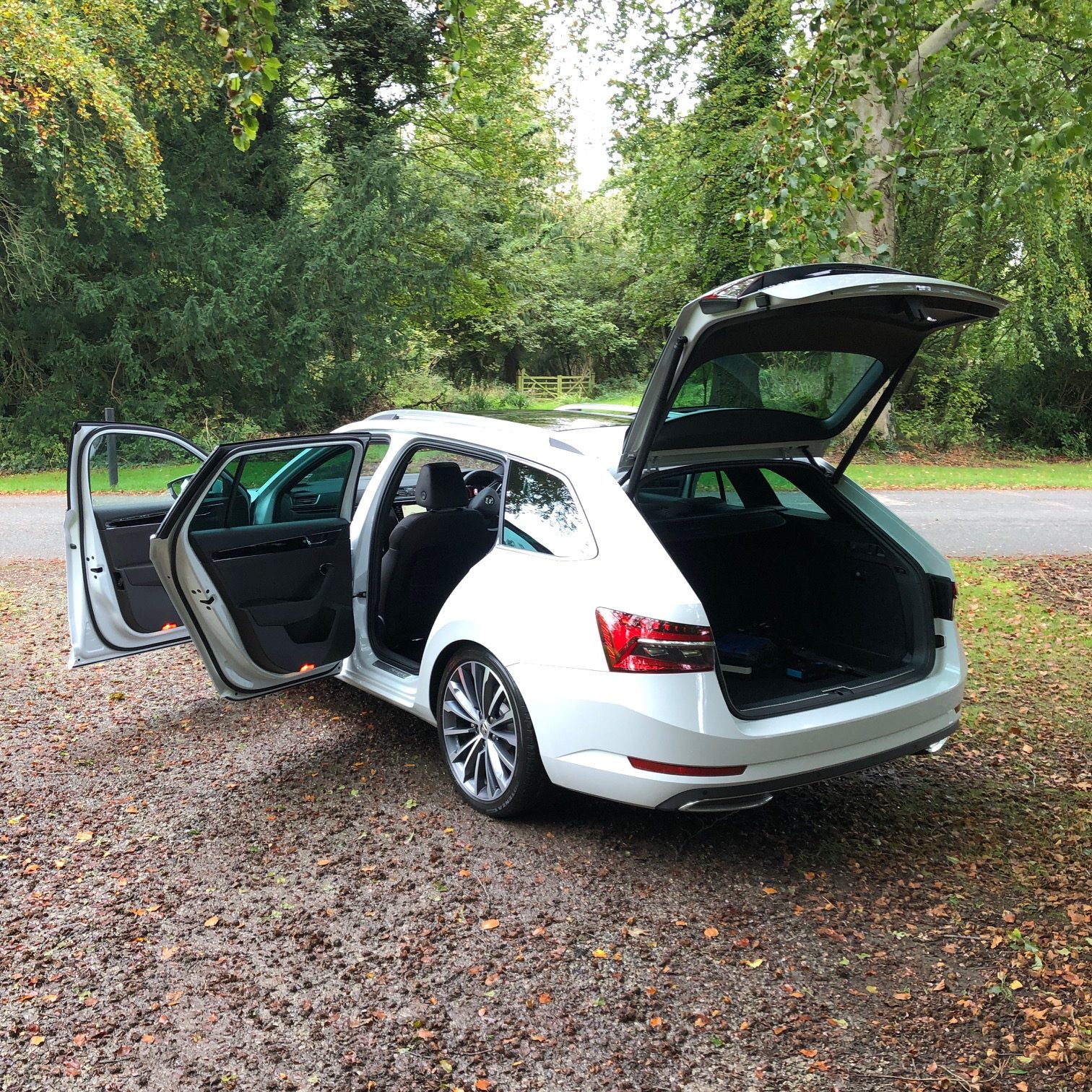