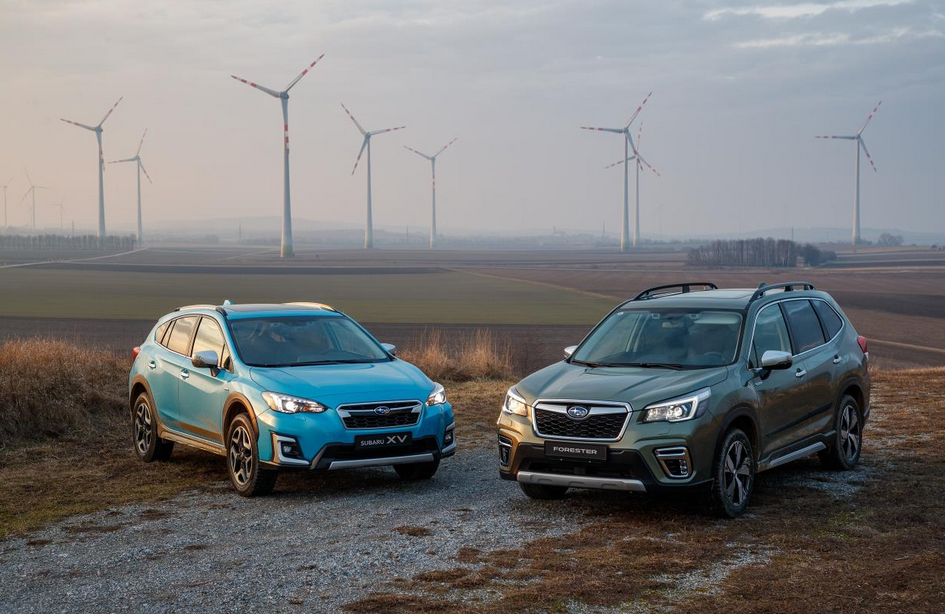 Subaru Ireland have released details of their new e-BOXER hybrid models which are set to arrive in Ireland this November. The Subaru XV Crossover and the all-new Forester are the first two models to feature the e-BOXER, Subaru’s new-generation power unit system which combines electric motor assist with two of Subaru’s core technologies: BOXER engine and symmetrical all-wheel drive. The Subaru e-BOXER features a customised lineartronic transmission that integrates an electric motor, powered by a high performance Lithium-ion battery, DC/DC Converter and Electric Motor Inverter. This e-BOXER announcement follows news that Toyota and Subaru will jointly develop a BEV-dedicated platform as early as next year, marking the next stage of the Subaru electrification strategy. The two companies will apply Subaru’s all-wheel drive and Toyota’s vehicle electrification technologies to jointly develop a C-segment SUV.

The Subaru e-BOXER system adjusts the power-split ratio between the dedicated 2.0litre direct-injection engine and the electric motor to match the driving condition, offering 3 driving modes: Engine driving, EV driving, and Motor Assist driving. From standstill, or at low speed, the electric motor alone powers the vehicle, for a quiet and zero-emission driving. Depending on the vehicle and battery condition, it can drive on EV-Mode for distances ranging up to about 1.6km, and reach speeds up to 40km/h. At medium speeds, power from both the motor and the engine combine to give a responsive, linear and fuel-efficient acceleration, while at high-speed the 2.0litre direct-injection BOXER engine powers the vehicle while recharging the battery. The e-BOXER offers improved fuel consumption in urban, stop-and-go traffic, where depending on driver’s driving style, fuel consumption can be reduced by up to 11% compared to the outgoing 2.0litre petrol version. The electric motor assist and the battery pack are aligned longitudinally. The heavy motor is placed near the vehicle’s center of gravity, while the battery and other components are arranged above the rear axle providing an even lower center of gravity and a better balance of front/rear vehicle weight distribution. Adding more flexibility for driving conditions, is a standard driver-selectable SI-DRIVE, a powertrain performance management system that allows the driver to tailor the vehicle’s throttle characteristics by choosing between “Intelligent” and “Sport” modes. Safer than ever, the new Forester is the most technological advanced Subaru yet, equipped with a host of new Advanced Safety technologies. It is available as standard with EyeSight Driver Assist Technology, and adds to its increased safety package, the Driver Monitoring System, a new facial recognition technology that alerts the driver of fatigue or distraction while on the road, as well as automatically adjusting driver settings for seat position, door mirror angles, and air-conditioning preferences. Additionally, the new model introduces the Reverse Automatic Braking, to help avoid collisions when reversing and reduces the damage in case of collision.

From the outside, the exterior has shoulder lines that follow around the pillars to emphasize height and strength while the prominent wheel arches emphasize the all-wheel drive system’s functionality. The new Forester features a spacious passenger cabin and a versatile cargo compartment thanks to the compact battery that minimizes spatial impact. The width is increased by 20mm over the previous model providing more front seat comfort. The wheelbase was stretched 30 mm, as a result, the distance between the front and the rear seat passenger was extended by 33mm for improved rear seat comfort. With 220 millimeters of ground clearance, along with the widest possible approach and departure angles, the new Forester is well suited for off-road adventures. The X-Mode is now available with dual functions, suited for a variety of weather and road conditions. Keeping its rugged character, the all-new Forester towing capacity is 1870kg.

XV Crossover e-BOXER
Since its launch in 2012, the Subaru XV Crossover has become a popular choice among many customers, making it the most sold Subaru in Europe last year. The XV Crossover is a key model that embodies the brand’s safe, fun and tough core pillars. The Subaru XV Crossover is built on the all-new Subaru Global Platform to achieve world-class collision safety and superior hazard avoidance, as well as increased advances in driver-responsive handling and ride comfort. The Subaru Global Platform brings significant enhancement to the body and chassis rigidity and impact energy absorption is improved by 40% over present models.

Just like the Forester, the XV Crossover is powered by a direct-injection 2.0-litre horizontally opposed four-cylinder engine and paired with an electric motor within the customized lineartronic transmission. With safety as a top priority, the Subaru XV Crossover e-BOXER comes standard with a suite of driver-assist and safety features, such as EyeSight driver assist and Rear Vehicle Detection. Its tough character combines a compact body with 220mm ground clearance, underpinned by Subaru’s original Symmetrical AWD System, Active Torque Vectoring, and an improved X-Mode system for true SUV capabilities.

The all-new Forester is priced at €44,495 for the SE model and is generously equipped with LED Headlights, Keyless access, electrically adjustable driver seat, Driver monitoring system, EyeSight, X-Mode 2 and a towing capacity up to 1,800kg all as standard. The SE Premium edition is priced at €48,195 and includes 18” alloys, Sunroof, Leather seats, Satellite Navigation, Power tailgate, heated rear seats and heated steering wheel. The Subaru XV Crossover is priced at €38,495 for the SE model which includes LED headlights, 17” alloys, electrically adjustable and heated driver seat, EyeSight, Keyless access and Dual zone air-conditioning. For €41,495 the SE Premium version offers upgrades such as a Sunroof, Satellite Navigation and Driver seat electrical adjustments.

Order books are now open for both models with first vehicles set to arrive on Irish shores this November.