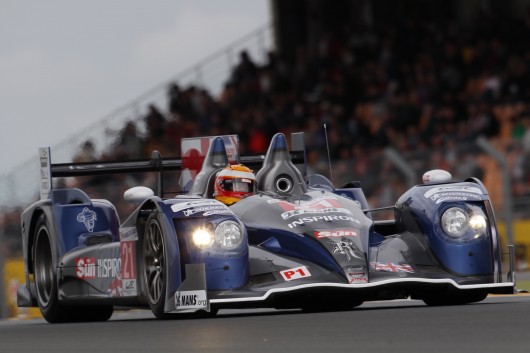 Unfortunately for Comber’s Jonny Kane’s and Strakka Racing this years 80th Le Mans 24 Hours ended in disappointment after a series of unexpected problems hampered their race. The teams build-up to the race had given Kane and the team the top privateer petrol position, after a sensational qualifying session put the Silverstone-based team’s HPD ARX-03a in 7th position overall (out of 56 cars) on the P1 prototype car’s first visit to la Sarthe. This meant that Kane would start the race immediately behind the four works Audis and two works Toyotas and in front of all its main rivals. The car recorded a maximum speed of 200mph (321kph) during qualifying and the team’s best lap time of 3:29.622 was a full two seconds quicker than the team’s previous best (3:31.651).

As Kane got ready to take up his customary position of starting the race, an oil leak in the transmission system prevented the no21 HPD ARX-03ay from taking its rightful 7th place on the grid. It took 22 minutes before Kane was able to join the race, six laps behind the leaders but he received a massive cheer from the 70,000 British spectators, as the fighting bulldog spirit began its astonishing comeback. The HPD ARX-03a was consistently the fastest privateer car out on track, and in parts its lap times were only surpassed by those of the leading works Audis.

Progress up the timing screens continued but during kane’s late evening second stint a misunderstanding in communications saw him push harder than needed. This resulted in Kane spinning and a visit to the Ford Chicane gravel trap and wall. Luckily Kane was able to drive straight out and head for his pit for a change of bodywork on the Strakka’s right rear. This minor mishap dropped the team from 18th to 23rd but was his only glitch in an otherwise truly outstanding performance.

With all three drivers driving exceptionally well with fast, consistent and precise driving the team moved up to 7th but with five hours remaining, concerns began to grow about the car’s water pressure. Eventually there was a fear that the car may stop out on track and the team not finish the race, so in order to prevent a DNF the car was parked in the garage for much of the final three hours and only returned to the track for kane to take the chequered flag.This certainly wasn’t the way Strakka Racing wanted to finish the race but it meant that as they crossed the finish line they scored 3rd placed points in the Privateer’s Class of the WEC, made all the more important as double points were awarded at Le Mans.

Kane commented “It’s been a tough Le Mans, for the lads more than for us drivers to be honest. We ran so many laps in practice without a problem, and it’s really cruel that we had to come off the grid because of a small oil leak. All credit to the team that we only lost six laps, which at Le Mans still keeps you in the hunt for a good result. It was even crueller to have a water pressure problem after we’d fought our way up from last to seventh overall. The car was running really well, handling brilliantly and all we had to do as drivers was push as hard as we could.”

“Everything had been going well, although I had a bit of a mis-communication during the night with the pit wall. I heard on the radio that the gap to David Brabham was one minute and I thought I heard that he was catching me at 1.5 seconds per lap. In actual fact it was the other way around and I was catching him, but I upped my pace a bit to try and stop losing time! I did go faster, but I tried to be a little bit greedy at the final chicane, cut the corner too much and the floor of the car hit the kerbs and spat me off. I hit the tyre barrier very gently, but hard enough to have to come in for repairs, which must have cost us another lap. Every stint we did in the car was fast, so it’s such a shame to work so hard and get so far and then have a problem near the end.”

Kane and Stakka’s next race will be the 6 hours of Silverstone on the 26th August.