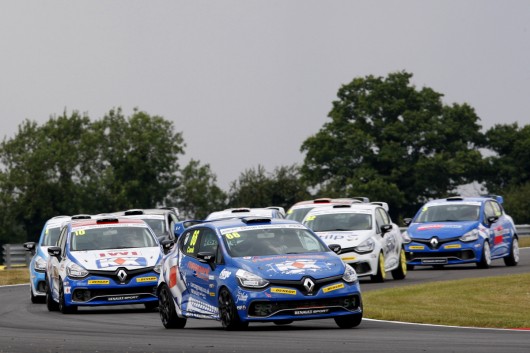 The Courier Connections Renault UK Clio Cup will make a welcome return to Knockhill race circuit in Scotland this weekend, for rounds 13 and 14 of this year’s championship. There’s a boosted entry of 15 drivers confirmed for Knockhill too so racing promises to be close and entertaining.

Championship leading team SV Racing will be expanding to a five-car squad for rounds 13 and 14 with former Scottish Legends Cars title winner Jamie Clarke (Formby) making his maiden appearance in the Dunlop MSA British Touring Car Championship feeder series. Clarke is already a race winner in Renault Clio machinery with Danny Buxton’s team, albeit in the previous generation car during last November’s Autumn Cup event where he starred with victory in only his second front-wheel drive race at Rockingham. The 34-year-old, who isn’t able to commit to a full season of racing due to business commitments, knows the new 1.6-litre turbo-charged Clio is an entirely different challenge but is still hopeful of a strong showing – especially as participation at Knockhill has meant cutting short a family holiday.

“I’m looking forward to racing at Knockhill again and being back with Danny [Buxton] and the SV guys”, said the Scotsman, “My family has kindly agreed to cut short our holiday to make this happen, so I’m hoping it’ll go well! I don’t have the time to race too often due to business, but I am trying to have one or two outings a year just to keep my hand in. “I’ll turn up with my crash helmet and just go into the two test sessions on the Friday not expecting too much – I’m conscious the other guys have had half a season in the car. It’ll be starting from scratch again really so we’ll just play it by ear and see how we get on.”

Notably, the seventh race meeting of the season is an especially important one for championship sponsor Courier Connections – the Lanarkshire distribution business set to welcome a large number of guests to its home event. Furthermore, the 2014 season marks the 40th anniversary of Renault motorsport in the UK while Knockhill is celebrating its fourth decade as a motor racing venue.

Josh Cook (Bath) has a significant 34-point cushion at the top of the overall championship as he prepares to head to the Fife track for the first time in his career, having secured a terrific double victory at Snetterton last time out. In doing so, he also moved back ahead of chief rival James Colburn (Worthing) at the head of the Graduate Cup class battle. Westbourne Motorsport’s Colburn, unlike Cook and the majority of this year’s Clio Cup entry, does have experience of Knockhill from the category’s last visit to Scotland four years ago. Back then, he was in his second season of Clios and, at just 17-years-of-age, secured a best finish of fifth place.

Mike Bushell (Tunbridge Wells) is currently third in the outright championship for VitalRacing with Team Pyro and will be hungrier than ever to make a return to the top step of the podium. Qualifying on pole position for each of the Snetterton races, Bushell had problems getting away from the line cleanly in each contest and so had to settle for a best finish of second place in the opening race.

The tightest battle in the series top five is between fourth placed Ant Whorton-Eales (Lichfield) and 20Ten Racing’s Jordan Stilp (Potterspury), just three points splitting the two youngsters. Were it not for a three-point penalty last time out, Croft double race winner Stilp would have been level-pegging on points with the SV Racing with KX driver going into Knockhill. Team Pyro’s Lee Pattison (Scholes) has a huge 67-point lead in the Masters Cup class over multiple main series champion Paul Rivett (Banstead), the WDE Motorsport driver a further 40 points clear of 20Ten Racing’s Mark Howard (Westborough).

Following pre-event testing on Friday, 22nd August, qualifying for rounds 13 and 14 of the Courier Connections Renault UK Clio Cup season will get underway at 09.00 on Saturday, 23rd August, with race one following at 15.50. On Sunday, 24th August, the second race of the weekend will begin at 12.30 and will be screened live on ITV4 and ITV4 HD as well as online at www.itv.com/btcc