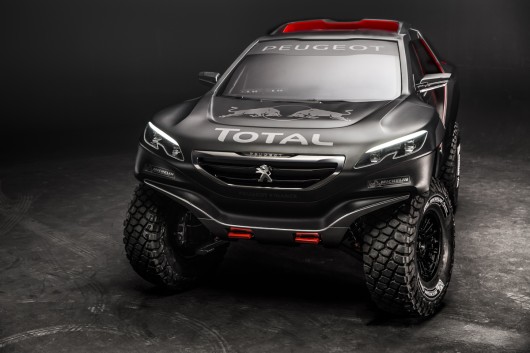 Peugeot has built its 2015 Dakar contender, the Peugeot Sport 2008 DKR. Carlos Sainz and Cyril Despres will drive for the team on next January’s Dakar. This 2008 is far removed from its road-going sibling, it sits high off the ground on 37” tyres.

Commenting on the new 2008 DKR, Project Leader at Peugeot Sport, Jean-Christophe Pailler said, “We provided Peugeot’s Style Centre with a very precise brief. We supplied them with the basic key dimensions, as well as other information such as the cabin space we required, plus the wheel size and the suspension travel. They also had aerodynamic data resulting from our early simulation work.” “We carried out an in-depth analysis of what already existed in the world of cross-country rallying and weighed up the benefits of the different solutions. In the end, we opted for an approach that was quite different to that of the competition. Given the off-road capability of two-wheel drive transmission and its ability to run on sand, that’s the choice we ultimately went for. It enabled us to fit bigger wheels and also to benefit from more suspension travel.”