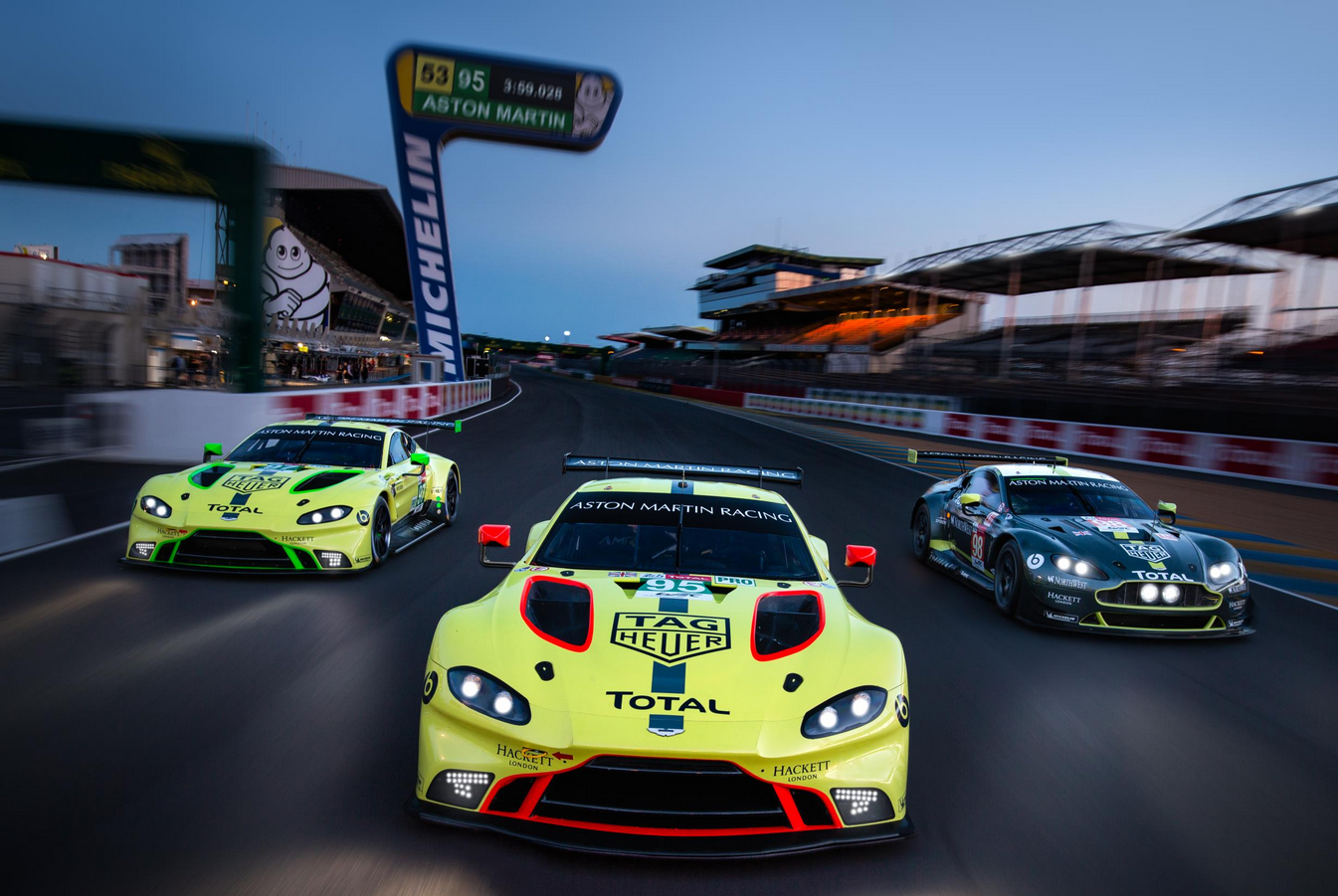 Aston Martin Racing returns to the scene of its famous 2017 Le Mans 24 Hours triumph with the all-new Aston Martin Vantage GTE, which makes its first competitive appearance on the legendary Circuit de la Sarthe this weekend (16-17 June). A year on from Jonny Adam’s dramatic late pass for the lead of the GTE Pro category that led to a glorious win for Aston Martin Racing, the team has entered two new Vantage GTEs in the 2018 event. Based on the critically-acclaimed Aston Martin Vantage road car and powered by the same 4.0-litre, V8 turbo-charged engine optimised by AMR, the Vantage GTEs are part of a 17-strong GTE Pro line-up that represents the most competitive field ever assembled for the class.

The new Vantage GTE made a solid debut in Spa-Francorchamps with both the #95 car driven by Nicki Thiim (DEN), Marco Sørensen (DEN) and three-time Le Mans winner Darren Turner (GB) and the #97 machine of Maxime Martin (B), Alex Lynn (GB) and Adam (GB) finishing in the points. Following an extensive development programme that covered 35,000km over the winter, the team is now ready to give the car its toughest examination yet in the most famous race of all.

This in spite of Sørensen’s accident at the Le Mans test day, which required the team to build up a brand new chassis in a tight timeframe. Aston Martin Racing’s technicians and engineers worked around the clock in split shifts to ensure a fresh #95 ‘DaneTrain’ was completed, shaken down and ready for scrutineering just six days after work began on a new race car.

The new Vantage GTE replaces the highly-decorated normally-aspirated V8 Vantage GTE, but that doesn’t mean the old car’s hunt for Le Mans glory is over. Indeed two will compete in this year’s event. The #98 car, driven by Aston Martin Racing’s reigning GTE Am champions Paul Dalla Lana (CDN), Mathias Lauda (A) and Pedro Lamy (POR), will seek to add a Le Mans class victory to its extraordinary success tally, which continued with another GTE Am win in the opening round of the FIA World Endurance Championship at Spa last month. The second V8 Vantage GTE meanwhile, will be campaigned by Aston Martin’s partner team TF Sport, driven by Charlie Eastwood (IRL), Euan Hankey (GB) and Salih Yoluc (TUR).

Aston Martin Racing Team Principal Paul Howarth added: “Le Mans has already thrown up many challenges for the team to deal with this year, including the build of a brand new Vantage GTE chassis and repairing the #98 GTE Am car which was damaged during the test. I truly believe the team has demonstrated an exemplary example of teamwork and how to overcome unforeseen events. We are all now focussed on the race week and looking forward to what is shaping up to be one of the most competitive GT entries of the modern era. I have every confidence in all areas of the team that we will rise to the challenge.”

Aston Martin Racing Technical Director Dan Sayers said: “Le Mans is a unique circuit just as the race is one of a kind, but we have prepared long and hard for this with a comprehensive and extensive testing programme. We were very happy with how the car ran during the test day, and our drivers reported that it behaved well through the critical sectors of the lap. So now it’s up to us to ensure it remains reliable and consistent for them to perform in the biggest race of them all. As ever, that means executing in all areas so that we leave nothing on the table, whether that be in engineering, pitstops or preparation. We’ve been working towards this point since we started testing the new car nearly a year ago and it will be a proud moment to see the new cars lined up on the grid next weekend.”

Vice President and Chief Special Operations Officer David King said: “The Le Mans 24 Hours is the jewel in the crown of sportscar racing and one of the principal reasons we build racing cars is to go out and beat our rivals in this race. Le Mans provides the ultimate test of durability and performance on and off the track. We’ve already had one test of endurance, which the team passed with aplomb with all the tremendous work and dedication that went in to building a new #95 Aston Martin Vantage GTE in a short time period. Now we need to go out and deliver the best results possible to reward that hard work and commitment from everybody in the weeks leading up to the race.”

Marco Sørensen (DEN), #95 Aston Martin Vantage GTE: “I’m very much looking forward to racing at Le Mans after all the build up. We didn’t have the best start for a Le Mans campaign with my accident but now obviously the mechanics are preparing a fresh car and I just cannot wait to go there and do a great job to do them justice for the amazing job they have done in such a short space of time. The car felt great through the whole test so I am really excited about driving it in the race. It’s time to just go flat out and race for a good result and deliver for the whole team.”

Nicki Thiim (DEN), #95 Aston Martin Vantage GTE: “`Le Mans is the highlight of the year. As a racing driver, as a racing fan, this is the big one. The test day was not great but the guys have done a stunning job to get the #95 car ready for the race weekend. I can’t wait to go directly to Le Mans, meet the fans, get the whole Le Mans feeling inside and the pure rush that this week gives you. I’m pretty sure we are going to be competitive. All the manufacturers are so close and I’m certain that this year the GTE Pro class is going to be the one to watch and the hardest fought over.”

Darren Turner (GB), #95 Aston Martin Vantage GTE: “I’m so excited to be going to Le Mans this year with the Aston Martin Vantage GTE. I’ve really enjoyed the extensive test programme that we began last August and the whole development process. At the test day I was able to get a good number of laps under my belt and the car left a very positive impression on me while running in the Le Mans trim. Obviously after Marco’s accident, Aston Martin Racing have been working around the clock to build us a new race car in time for Wednesday’s opening practice session. I’m really proud of how the team has responded and the effort everyone at Banbury has put in. I can’t wait to be back in the ‘DaneTrain’ as we aim to repeat last week’s success.”

Jonny Adam (GB), #97 Aston Martin Vantage GTE: “I can’t wait to return to Le Mans. Last year was very special for me and the whole team with the win we secured in the #97 car and it will only serve to give us extra confidence as we head into this weekend. The new Aston Martin Vantage GTE is an impressive step forward from its predecessor and we all love driving it. We’ve done a lot of mileage in testing through the off-season so we are ready and prepared as a team for the biggest race of the season.”

Alex Lynn (GB), #97 Aston Martin Vantage GTE: “It goes without saying that for me it’s the highest honour to be able to represent Aston Martin Racing at Le Mans in 2018 with the brand new Vantage GTE. I can’t wait to hit the track for real and fight for victory with this famous team.”

Maxime Martin (B), #97 Aston Martin Vantage GTE: “I am really looking forward to driving at Le Mans, especially with this new Vantage GTE. The car felt very strong during the Le Mans test, and it gave us drivers a lot of confidence. I think it is going to be an amazing race and one of the hardest and toughest the GTE class has ever seen, but I think we are more than well prepared. It is going to be a great battle and I can’t wait to get involved in it.”