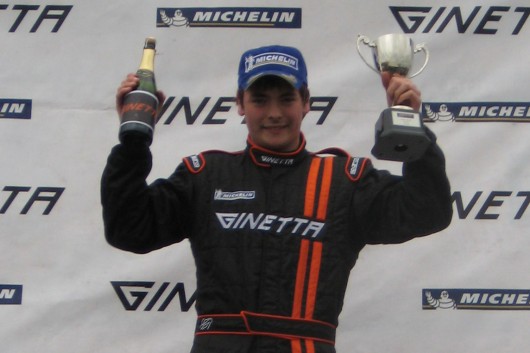 After a weekend of mixed emotions at Donington Park that included yet another fantastic win for the young Irishman, Niall Murray was keen to get his Ginetta Junior Championship challenge back on course as the championship moved to Thruxton. Having completed the pre-event test some 3 weeks previous to the event due to noise restrictions at the Hamshire venue, Murray was confident in himself and his car that he could remain at the front of the field at the fastest race circuit on the 2012 calendar.

With intermittent rain on an already damp track approaching qualifying, the Championship organisers called for all teams to run on wet tyres. As the session got underway, Murray immediately posted a 2nd fastest time, just behind championship rival Charlie Robertson. However, with the track now starting to dry out, the Michelin wet tyres were rapidly loosing their advantage and this was reflected in the times as few drivers were improving on their early session times. Out in front, Murray put in a series of strong laps but couldn’t match the pace of poleman Robertson. As the flag dropped on the 15 minute session, Charlie Robertson took pole with Niall lining up 2nd and had also bagged 2nd for race 2 with his second fastest time from the session. Crucially, Championship leader Sennan Fielding was down in 5th providing Murray with the best opportunity to seize the advantage to reduce his championship lead.

Once again for race 1, a controversial call was made for all drivers to run on wet tyres by the championship organisers, despite a largely dry track with most other championships running on slicks. Murray struggled off the line at the start leaving him down in 4th at the end of lap 1. Now following team mate Andrew Watson, Niall seemed to overcome any potential issues from the start and set about making his way back up the order. By lap 2, Murray was now past Watson and working his way into a 2.5 second deficit from 2nd place man Harry Woodhead. Murray the more experienced of the pair was able to use this advantage to close in on Woodhead and on lap 7, Niall made a superb move around Woodhead approaching the chicane to move into 2nd. However out in front race leader Charlie Robertson had now built up a strong lead. Despite this Murray got his head down to both ensure he remained in 2nd but also to be ready to capitalise on any mistakes from the race leader up in front. As the chequered flag dropped it was Robertson who won with Niall Murray taking a fantastic 2nd and with it and a good haul of championship points to close in on series leader Sennan Fielding.

Race 2 was a totally different story on Sunday with a totally soaked Thruxton Racing Circuit.

The event officials decided that the race would be started under safety car conditions to provide an opportunity for drivers to assess the most suitable racing line when the action got underway. After 2 laps of Safety car conditions, the lights were out and the Ginetta Electric G50 Safety car pulled off to allow the competitive action to begin. Murray, keen to ensure he brought as many championships away from the weekend as possible got a good start to stay with race leader Charlie Robertson. With significant spray from the race leader Robertson, Niall in his Douglas Motorsport Ginetta G40 was driving very well to stay with race leader Robertson. As the race progressed, Niall had managed to find a good rhythm and was lapping very consistently but up in front race leader Robertson was showing small signs that he was struggling in the conditions. Niall put in a valiant effort towards the end of the race to try and reel in the leader but in these ultra slippy conditions it proved a challenging task and as the chequered flag dropped Niall crossed the line a superb 2nd and with it, a fantastic haul of championship points to close the gap to new championship leader Charlie Robertson.

Speaking after the race, Niall commented on a challenging weekend, “race 1 proved difficult as I got a poor start off the line, but quickly I managed to work my way back up to 2nd which was brilliant as the tyres were pretty much ruined by the half way point of the race. Race 2 must have been very boring for the fans to watch on TV but for the first few laps I could see nothing with the spray. As the race progressed I got into a good rhythm to ensure I stayed on the track and retained a healthy championship points finish. Coming into the weekend I was over 20 points off the championship lead so its fantastic to come away with the gap closed right up.”