Home Motorsport News Murray does us proud in Oulton 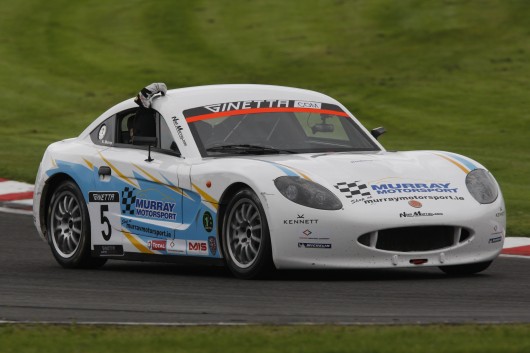 It may have been a disappointing weekend for a lot of Irish sports fans, but there was one young man flying the Irish flag in victory. Niall Murray from Firhouse, Dublin cleaned-up taking the spoils in both Ginetta Junior races at Oulton Park. See report below:

A great start in race 1 put Niall up to third just behind leader Pepe Massot and main rival Charlie Robertson. With nothing separating the lead trio, Niall carefully applied the pressure over the next sequence of laps on Robertson before finding a way past on lap 4. Murray really had the bit between his teeth and a victory was just what his championship hopes needed. With Massot in his sights, Niall in his KENNETT Ginetta G40 was flying and within 3 laps had caught and passed Massot to lead going into lap 8. Murray used his years experience over the novice driver to build a small cushion and protect his lead which he did with perfection crossing the line to take a fantastic victory to add to a superb tally of 6 podium finishes from 7 rounds so far this season. As an added bonus, Niall set the fastest lap of the race awarding him a new class lap record.

Starting again from 4th, Murray was brimming with confidence under the sunshine at Oulton Park. Having bagged a win on Saturday, Niall was keen to make it a double victory that would put him back into a commanding lead of the championship. Another good start off the line put Murray into 3rd and challenging for 2nd when the race was red flagged due to Ricky Collard going off. After Collard’s car was eventually recovered, a new race was declared with original grid positions and a new shortened race distance of 6 laps. Another superb start off the line put Murray into 2nd after the first corner behind leader Pepe Massot. However Murray wasn’t stopping there, coming into Hislops Niall got a great run on Massot to move into the lead of the race. Championship rival Charlie Robertson was now hot on his heels but a clever Murray was defending his lead and not giving an inch. A flying Sennan Fielding got a great run on Robertson to move into 2nd and he was now keeping Murray on his toes. With Fielding and Robertson now fighting for position, this allowed Murray to open a very small advantage. Pepe Massot also capitalised on this battle and managed to slip past Robertson to move into third before contact between the pair left Robertson down the order. Out in front it was an ecstatic Niall Murray punching the air as he crossed the line in his Murray Motorsport supported Ginetta G40 prepared superbly by Douglas Motorsport to take a fine double victory and with it move into a 20 point championship lead.

Speaking after the race, Niall expressed his delight at a perfect weekend, “this has been easily the best weekend of my career. This really is what I needed for my championship and I couldn’t have asked anymore from everyone including my team Douglas Motorsport, my sponsors Murray Motorsport, KENNETT, P1 Digital and all my friends and supporters. Were going to enjoy this one!”