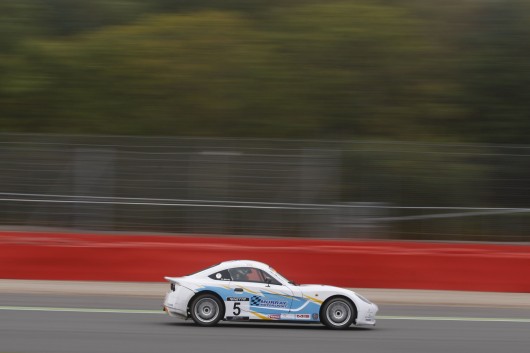 Coming from a disappointing weekend in Rockingham some two weeks previous, Niall Murray was keen to get back to winning ways coming to the home of the British Formula 1 Grand Prix, Silverstone. Still very much in the hunt for the 2012 Ginetta Junior Championship title, Murray needed to ensure he had a strong points finish to stay within reach of current points leader Charlie Robertson.

Murray opened the weekend reasonably pleased with his pace in Friday and Saturday’s free practice sessions. Despite showing slightly down the order, Niall was confident that new tyres for Saturday’s qualifying would allow him to find those all important tenths of a second to swiftly move up the order.

Qualifying was typical of the Ginetta Junior Championship this season with mere tenths of a second splitting most of the field. With the order changing as every lap went by in the end Niall would end up ninth on the grid for race one leaving him with a lot of work to make his way back up the order. However on several occasions this season Murray has shown his true race craft to quickly make it to the front of the field.

Off the line for Saturday afternoon’s race one Niall got a superb start. At the end of the opening lap Murray was now up to sixth and by lap three Niall was now challenging Harry Woodhead for third. However contact from championship rival Sennan Fielding would spell disaster for Murray leaving him down in twelfth and a lot more work to do. However Niall got his head down and over the next sequence put in a determined drive to work his way through the field eventually netting him sixth as the chequered flag fell on the open race of the weekend. Further good fortune would fall upon Murray as the race officials awarded fifth to Murray as a result of the contact with Fielding in the early part of the race.

After a race of two halves on Saturday afternoon, Niall now knew that he needed a podium finish more than ever from Sunday’s final race of the weekend. Starting seventh on the grid, Murray knew he had the pace to get to the head of the field quickly. Niall got a superb start off the line and in the opening laps of the race he was now up to fourth right behind Douglas Motorsport teammate Andrew Watson. At the head of the field Pepe Massot and William Palmer were locked in battle for the lead until the latter succumbed to the pressure and fell down the order. Now running third Murray found a way past Watson and was now breathing down Rookie driver Massot’s neck looking for any opportunity to pass. Murray tried an ambitious move into Maggotts for the lead but unfortunately had the reverse effect and opened the door for an on-form Andrew Watson to move back into second. On the last lap of the race it was now all action with the top five drivers including Massot, Watson, Murray, Palmer and even Sennan Fielding all bunched up on the run down to Brooklands. Coming into Luffield, Watson was now just clear in second with Murray right on his bumper for third. Crossing the finish line contact from Palmer resulted in one of the most exciting finishes of the season as both cars slid across the finish line with Murray just getting pipped at the post to third by Palmer. However Palmer had been handed a five second penalty for exceeding track limits during the race so Murray made his podium return to take third after one of the most exciting races of the season.

Speaking after the race, Murray expressed his delight at making his return to the podium, “This weekend has been full of highs and lows, but I’m glad to say we’ve ended on a high with a return to the podium! With Charlie having some bad luck this weekend, I’m delighted to say it means the championship now goes down to the wire in Brands Hatch in two weeks time, but I will really need to hit the ground racing there! I’d like to say a special well done to my teammate Andrew Watson taking his first victory this year in yesterdays race. Once again a big thanks to everyone who supports me at the races, on Twitter and Facebook and of course my sponsors, Murray Motorsport, KENNETT, P1 Digital along with my fantastic race team Douglas Motorsport”.

So the Ginetta Junior Championship is set for a thrilling finale on the Brands Hatch GP track in two weeks time for rounds 19 & 20.