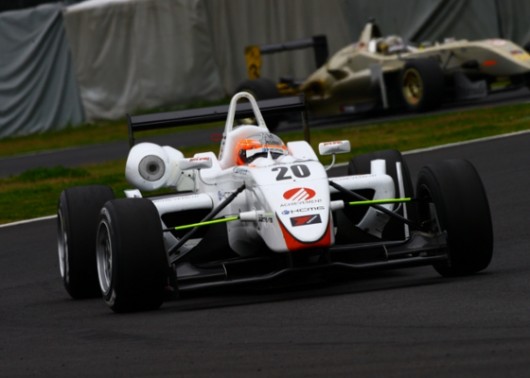 Up and coming Irish racing driver, Gary Thompson got his Japanese Formula Three campaign off to a mixed start in the season opener at the Suzuka International Circuit this weekend, the title challenger leaving the weekend with a DNF and fourth position, in rounds one and two respectively, at the Japanese circuit.

The Aviation Display and Cebu Pacific Air-backed Dubliner, had a challenging qualifying session, using the car for the first time in wet conditions, but thanks to the tremendous hard work from the SGC by KCMG team, managed to qualify fourth and third for rounds one and two.

Round one saw the 19 year-old make a strong start from fourth on the grid, charging into the first corner in third position.

With cars closing in from behind Thompson got boxed in, still fighting for second position Katsuta showed his inexperience, making an adventurous move in the middle of the straight, causing contact and ending Gary’s race with a broken steering rod and right front wheel.

Like round one, Thompson made a textbook start off the line from third position on the grid to immediately challenge for the lead entering the first corner.

Whilst challenging for first position, Thompson got swamped down, dropping him back into third place in the proceedings.

Despite an excellent start for the Smart Lamp backed Dubliner, Thompson struggled with pace for the rest of race, and by lap three dropped back to fourth place, where he completed the race.

“It was a disappointing opening race,” explained Thompson. “We had the pace to be on the podium but unfortunately it wasn’t meant to be.”

“Obviously not the ideal start to the year we wanted. We think we have a good direction for the development of the car and will be testing next week in Fuji.”

Rounds three and four of the Japanese Formula Three Championship will take place at Twinring Motegi on the 12th and 13th May.