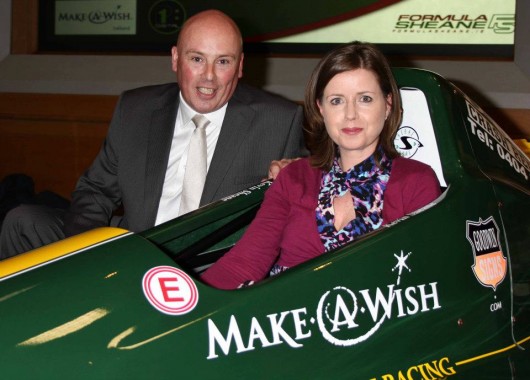 Ireland’s fastest one make racing class, Formula Sheane has announced that it has partnered with The Make A Wish Foundation Ireland. This link will see the race drivers along with their families and friends raise funds for the Irish charity. The first fundraising event is set to take place on June 9th at Mondello Park race circuit, Kildare where participants will walk a lap of the race track. The 2012 Formula Sheane Championship will drivers race at the Kildare motorsports venue and in Northern Ireland, at Kirkistown and Bishopscourt race circuits.

The Make A Wish Foundation grants wishes to children living with life-threatening illnesses between the ages of 3 to 18. Since it was founded in 1992, Make A Wish Ireland has granted over 1,000 wishes for children. Pictured above is Leo Nulty from Formula Sheane with Susan O’Dwyer, C.E.O. Make A Wish Ireland.