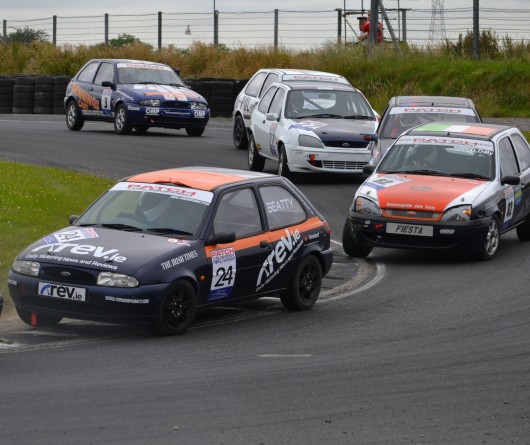 Last weekend Mondello Park in Co. Kildare resembled the Province of Palermo in Italy, where it takes it name from. With temperatures in the mid twenties competitors and spectators were in for a great weekend’s racing. The Formula Vee class was well supported for their festival weekend and provided some entertaining racing, although the recently introduced Patch Tyre Equipment Fiesta Zetec Championship proved to provide yet more exhilarating racing, with two races each day.

It was after midnight on Friday last when we finally added the finishing touches to my previously cherished Ford Fiesta. I don’t know if the previous owner would approve of the colourful decals which adorn the 3-door runabout now. With 34 potent fiestas entered, the fastest six would automatically qualify for the ‘A’ race, with the remaining 28 drivers forming a full grid (maximum of 28 cars on the grid) for a B race. The top 22 finishers of this race would go through to the A race later in the afternoon. This meant that the vast majority of drivers would end up having two races Saturday and Sunday, providing great value for money. 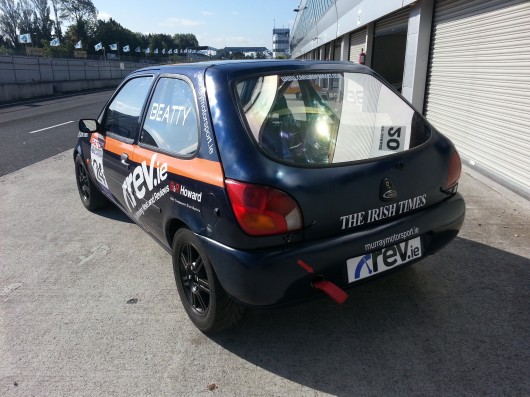 After numerous discussions and strategically planning what tire pressures to run, I headed out for qualifying. Thankfully I had a clear track for a few laps and pushed hard early on, aided by a tow down the straight from another competitor, managing to set the fastest time initially. My time was then improved on by Patrick Boland who set the fastest laptime (1:12.426) I finished the session with the third fastest laptime (1:12.479), therefore qualifying on the second row of the A race. Your second fastest laptime determined your grid position for race two, my second fastest time put me in second place on the grid for the final on Sunday. After qualifying the top three cars were weighed by the scrutineers as part of the eligibility checks, I was five kilograms overweight so the fuel load was lightened for the race.

I lined up on row two for race one alongside one of my best friends and former Abarth racing driver John Denning, with my work colleague Philip Lawless directly behind me in fifth spot. My sole aim was to get a decent start and avoid contact with either of these as both work and socialising could become difficult otherwise. When the start lights extinguished all the pre-planning when out the window, John and Phil were just two of the 27 cars in the race and I wasn’t going to be phased by them. Denning got a clean start and slotted in ahead of me in third place going into turn one, I tucked in behind and stayed with John for approximately half the race, under pressure from Lawless who was fast approaching. I made a few attempts to pass John getting alongside on a few occasions, he managed to drive the fiesta skilfully making it as wide as a Granada by times. Meanwhile, up front Vincent Brennan and Patrick Boland were pulling away as myself, Denning and Lawless were losing time battling with each other. Philip pulled off a daring manoeuvre to pass me successfully and set about trying to pass Denning. It all nearly ended in tears as I braked deeper in the fast double-apex turn 3 and made contact with Philip’s rear bumper causing him a handful of opposite lock, for which I received a waving fist in protest on the run to turn four. The race settled down and we finished in this position, with Vincent Brennan claiming the win from Patrick Boland, John Denning, Philip Lawless and myself. The post race discussions were joyful and friendships all intact. Further down the grid there were plenty of battles going on, some more physical then others, with an impressive 26 fiestas finishing the fifteen minute race around the 1.16 mile national circuit. 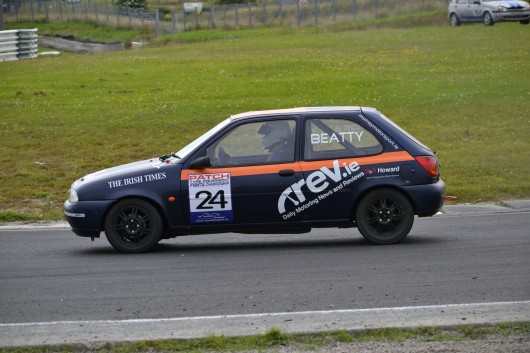 Sunday afternoon brought on more sunshine and a packed grandstand with ice-creams replacing flasks of coffee for the hardened spectators. The mondello.tv crew were hard at work filming all the day’s races live on the internet with commentary provided by the regular stalwart crew of Leo ‘motormouth’ Nulty and Matt Feeney.

I took to the grid for Sunday’s race on the front row in second place alongside Patrick Boland, with Lawless as ever close-by in third place. Thankfully Denning’s second fastest time from qualifying wasn’t too hot, so he was further down the grid, out of harms way. Patrick Boland bolted off the line from pole, I got a decent start but it wasn’t up to Boland’s pace. We battled closely for the lead in the opening laps, until Lawless caught up and wanted a piece of the action. By now, I should’ve seen his move coming but was caught unaware as he executed the perfect pass getting the run on me out of Dunlop corner. He continued on his quest to the front disposing of Boland who was relegated to second. Former Abarth racer Barry Hallion made a move to overtake me on the approach to turn four, I managed to hold my line and more importantly track position. Soon after the chequered flag was waved, much to my delight as the heat inside the car was probably close on 40 to 50 degrees. Philip took a well deserved win from Patrick Boland and I happily took the third spot on the podium. 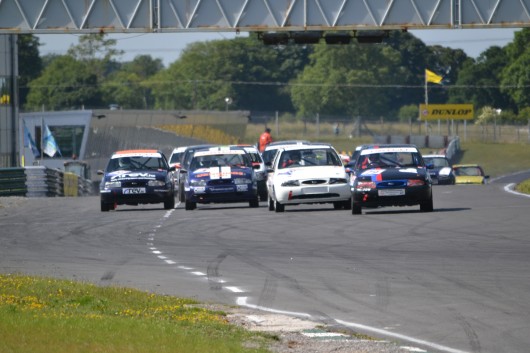 Needless to say there’ll be the inevitable banter in the office over my work colleague out performing me. Nevertheless, I’m delighted with my performance for my first races in the Patch Tyre Equipment Fiesta  Zetec Championship. It’s been a fantastic weekend of motorsport and one that exceeded my expectations, the promise of close racing was certainly delivered. Now it’s back to the workshop trophy in hand, for some fine tuning prior to the Fiesta’s next race outing on the 25th August. The aim will be to move up a step or two on the podium next time out. 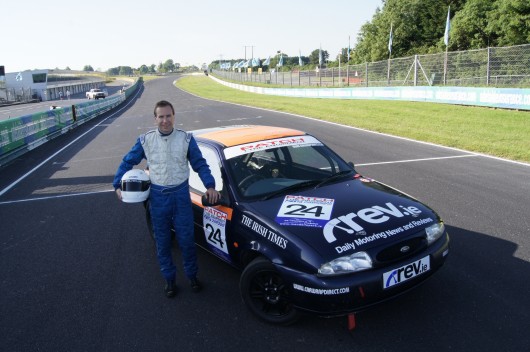