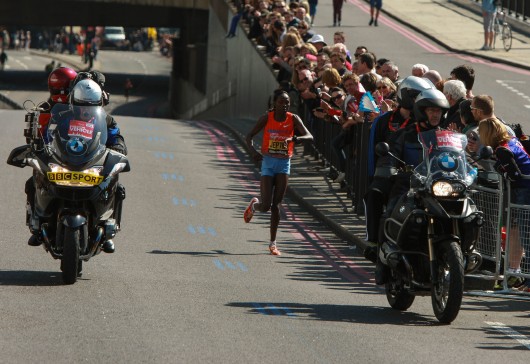 BMW Motorrad played a vital role in last weekend’s London Marathon, which saw 36,000 runners race the 26.2 mile circuit through London. BMW Motorrad had a fleet of 17 BMW motorcycles present, these were used as mobile filming platforms for the BBC, as well as timing bikes and support crews. The motorcycles in use included the BMW R 1200 GS and GS Adventure, F800 GT and R 1200 RT touring bikes. Commenting on the event, Lee Nicholls, Marketing Manager for BMW Motorrad, said, “The London Marathon is a fantastic event which highlights both the charitable nature of the British people and their innate sense of humour – with many runners entering in often uncomfortable and unsuitable fancy dress to raise extra money for their chosen charities. BMW Motorrad UK is very proud to be able to assist with such a prestigious and positive event.