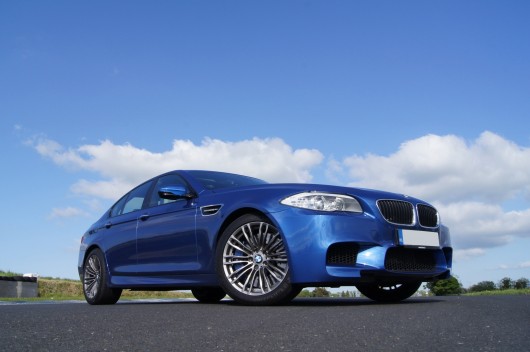 Whenever BMW announce the arrival of their latest M-offering there’s a frantic rush to see the car and hear the performance figures attained. With this fifth generation M5 BMW hasn’t disappointed, they’ve shown yet again their class-leading ability to produce supercar pasting performance saloons. Despite reducing the car’s engine size from its predecessors five-litre V10 to a 4.4-litre V8, they’ve managed to increase power by ten per cent, torque by 30 per cent and yet reduce fuel consumption by 30 per cent. With 560hp and 680Nm of torque, this M5’s engine is the most powerful production engine BMW has ever designed and manufactured. BMW claim a combined fuel consumption of 9.9l/100km, although I didn’t quite get too close to this figure over the course of a week’s driving. However there is a notably improvement on consumption over its predecessor, you can achieve a touring range without much effort.

Unlike its predecessor’s gearbox which provided slightly clumsy gear changes, this new model offers seamless gear shifts thanks to its intelligent seven-speed double-clutch Drivelogic transmission. The usability of this gearbox gives the M5 two characters, it can be a full on power-horse anytime, but more interestingly is how it can become docile at the press of a button. Select drive in automatic form and comfort settings for the steering, suspension and power delivery and the M5 transforms itself into a practical comfortable 5 Series, it’s effortless and relaxing to drive around town, something the previous M5 couldn’t become accustomed too. Coupled with the new transmission is a new Active M differential, that’s been tuned for track driving dynamics. It’s an electronically controlled multi-plate limited slip diff that works at lightening speed to control wheelspin and keep the car balanced. The Dynamic Stability Control (DSC) can be switched fully on for maximum driving safety or switched to M Dynamic Mode (MDM) which allows the driver a certain degree of slide under acceleration but will intervene when required to help prevent loss of control. You can thankfully switch all the driver aids off and enjoy the full 560hp as it fights for grip through the rear wheels. On track is one of the few places you can fully unleash the M5’s true power. There’s two ‘M’ buttons on the steering wheel which allow you to pre-programme two driving settings for the car, one for example for driving around town and the second for track driving. I set the M2 button to offer Sport plus responses from the engine, with the electronically controlled dampers set to Sport Plus for a firm ride and the Servotronic power assisted steering also in Sport Plus mode which enhances feedback through the weighted steering wheel. The turn-in on track is certainly impressive for car of this size, also considering it weighs almost two tonne, but the most remarkable aspect is the sheer acceleration provided from the 4.4-litre V8 engine, complete with TwinPower Turbo technology. You’re pushed backed firmly into the seat as the revs claim at a rate of knots, whilst the speed increases at an alarming rate. It’s poised too, with the stability control fully off you can provoke the M5 into a graceful power slide and drift through the corners with balance and control. In the real-world and certainly on Irish roads it’s almost unfeasible to use much of the M5’s power without risking a hefty amount of penalty points on your driving licence. With such a large amount of power going through the rear wheels it takes a delicate right foot to apply the correct amount of pressure in order to accelerate without causing the traction control to intervene and cut the power, at this level of performance there is a good case for having an all-wheel drive setup, to maximise the transfer of power from the engine to the driven wheels. That said, you can’t beat a rear-wheel drive setup for sheer driving enjoyment on track and on wide open roads. 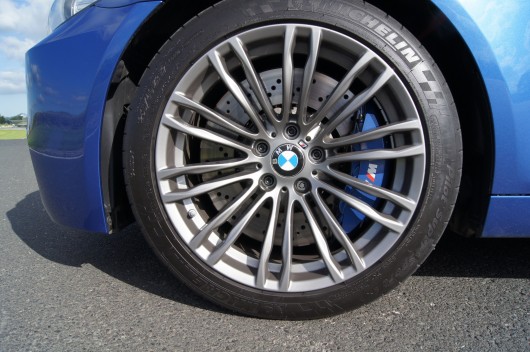 The M5 sits low on 19” alloys tucked under flared wheel arches, behind the wheels the blue six-piston brake callipers hint at the car’s performance capabilities. The trademark M gills are integrated into the front wings, whilst the rear lower bumper houses a diffuser with twin exhausts on either side. Finished in Monte Carlo Blue the M5 attracts attention wherever it goes. The M5’s interior isn’t too far removed from that of its regular 5 Series siblings, there’s some extra buttons around the centre console and the odd M logo to remind you what you’re in. The optional M multi-function seats provide a vast range of adjustment to suit all shapes and sizes, they hold you firmly in place for fervent driving. The cabin is uncluttered and provides a luxurious feeling for all the car’s occupants. With prices commencing from €135,280 naturally you’re rewarded with a decent level of standard specification, the M5 is no different with Head-up display, Xenon headlights, heated leather seats, Bluetooth connectivity, and Professional Multimedia Navigation, just some of the standard equipment onboard. 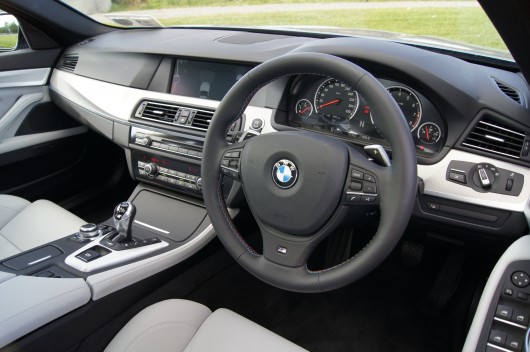 In a motoring world obsessed with fuel consumptions and tax bands, it’s refreshing to see BMW are still concentrating on producing glorious M-Powered vehicles. They’re already producing super-efficient cars such as the 320ed and 520ed (Efficient Dynamics) and have taken steps to improve emission and consumption figures with the new M5. But most importantly, they’ve achieved this whilst not detracting from the sublime driving experience that’s the true architecture of an M car. Long live the BMW M5.