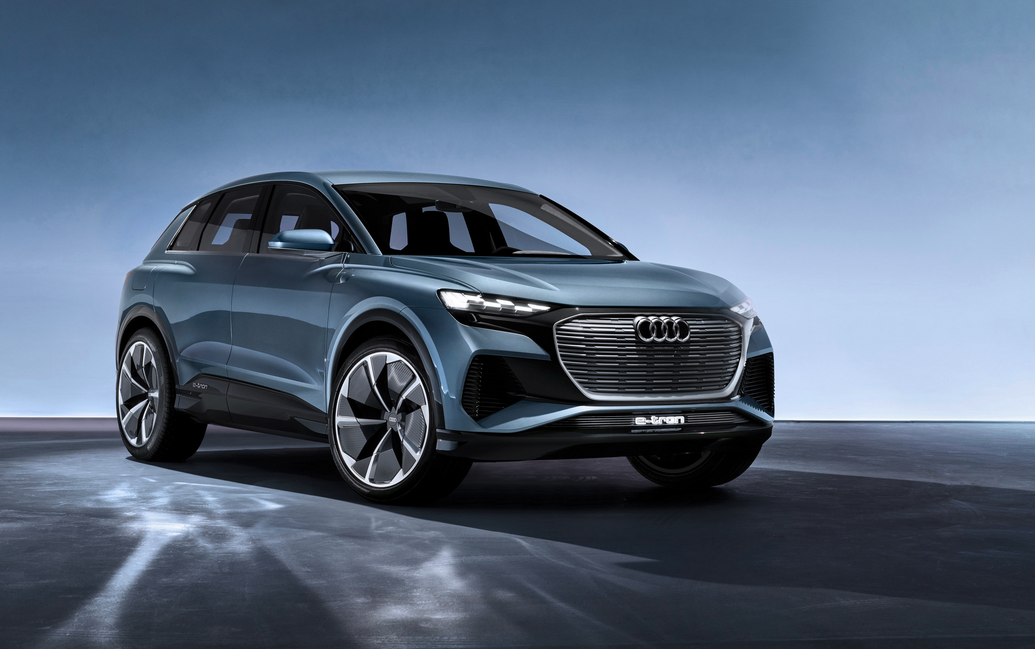 Audi are showcasing the ultimate electric technology with the Audi Q4 e-tron at the Geneva Motor Show. The driving power of the concept vehicle is brought to the road with quattro all-wheel drive. Thanks to excellent traction, it accelerates from zero to 100 km/h in just 6.3 seconds. It reaches its maximum speed at an electronically limited 180 km/h. A large battery with a capacity of 82 kilowatt hours takes up almost the entire space in the underbody area between the axles. The range of over 450 kilometres – in line with the WLTP standard – sets the benchmark in its class. The battery is charged with a maximum of 125 kilowatts. As a result, it takes just over 30 minutes to return to 80 percent of total capacity.

The Audi Q4 e-tron concept gives an advance look at what will already be the fifth series production electric vehicle that the manufacturer will introduce by the end of 2020. With this offering, Audi will cover all important market segments with all-electric drive vehicles, from the A segment to the full-size class, just under two years after the launch of the first electric car. At 4.59 metres long, 1.90 metres wide, 1.61 metres tall, the Audi Q4 e-tron concept takes its position in the upper third of the compact class. Its road space requirements thus qualify the electric SUV as an agile all-rounder, also suitable for city driving. In terms of the interior, by contrast, its wheelbase of 2.77 metres puts it at least one class higher. As there is no transmission tunnel restricting the space, the Q4 e-tron concept offers unsuspected spaciousness and comfort, especially in terms of legroom both at the front and in the rear.

The sense of spaciousness is underlined by the colour scheme. While light, warm colours dominate the upper section of the cabin, the dark carpet in the floor section provides a contrast. The headlining, the window pillars and the upper section of the door rail and dash panel are fitted with white and beige microfiber textiles. In the Audi e-tron concept, sustainability is the top priority not only in terms of the electric drive: the floor covering is made of recycled materials. Instead of chrome-plated metal decor frames, the surfaces are covered with a high-quality multi-layer paint finish. The painted frosted Plexiglas on the applications creates an intensive depth effect.

The virtual cockpit, located behind the steering wheel, displays elements for speed, charge level and navigation. The large-format head-up display with an augmented reality function is a new feature. It can display important graphical information, such as directional arrows for turning, directly on the course of the road.

Control panels designed as touch elements on the steering wheel spokes can be used to select frequently used functions. In the middle above the centre console, there is a 12.3-inch touchscreen via which the infotainment and vehicle functions are displayed and operated. It is tilted toward the driver for greater ease of operation. A strip of buttons for controlling the air conditioning is located below it. As the centre console does not need to hold functional elements such as a gear lever or hand brake actuation elements, it is designed as a spacious stowage compartment that includes a mobile charging unit. There is a horizontal area in high-quality design into which the selector button for the transmission mode is integrated which also serves as a cover for the front section of the console. In addition to the conventional lower storage compartment, the doors now provide the possibility to store bottles in the specially molded upper section, where they are easy to reach.

The Q4 e-tron concept is identifiable as an Audi at first glance by the Singleframe with the brand logo, the four rings. And it will take no more than two glances to see that this is an electric Audi e-tron: Like the first production Audi with electric drive, the new concept vehicle also features a structured closed surface within a broad, almost upright octagonal frame in place of a traditional radiator grille. Air is supplied via large inlets that extend from below the two matrix LED headlights all the way down to the front apron.

The prominently modelled fenders of all four wheels are a future classic Audi design feature that distinguishes the brand. The widened features of the Q4 e-tron concept are designed to be highly organic and flowing, and they add a characteristic touch to the side view. The accentuation of the rocker panel area between the axles, where the battery and thus the powerhouse of this SUV is located, is a typical feature of the e-tron. Large 22 inch wheels leave no doubt about the potential of the Audi e-tron concept. Its roof line slants down slightly toward the back, giving the silhouette a particularly dynamic look. The striking broad light band that connects the two lamp units on the rear end of the Audi Q4 e-tron concept was incorporated to reflect an element of the Audi e-tron.