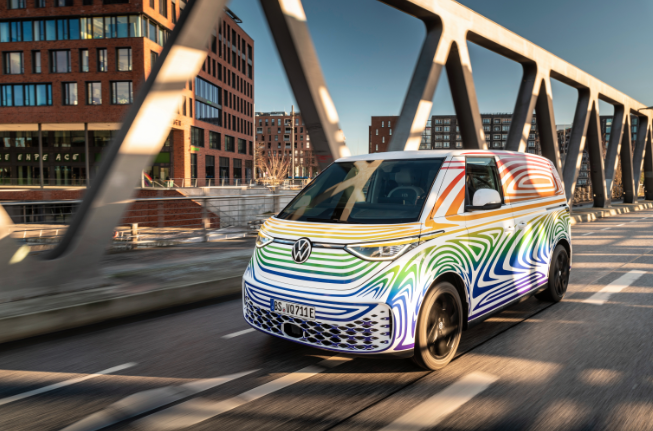 The world premiere of the ID. BUZZ concept car at the Detroit Motor Show in January 2017 triggered a sensational response around the globe. Five intensive years of development work followed and now the ID. Buzz is ready for its world premiere on 9 March. The all-electric Bulli will be launched simultaneously as the emission-free ID. Buzz (5-seater) and Buzz Cargo (van).

Volkswagen Commercial Vehicles is currently going through the final phase of trials of the ID. Buzz. Pre-production prototypes currently touring Europe are disguised with colourful graphics. Designers have rigorously transferred the styling of the 2017 concept car to the 2022 full-production version. Both ID. Buzz versions draw on the stylistic elements of the legendary T1, the original Bulli, ranging from short vehicle body overhangs and maximum utilisation of space on a minimal footprint to the classic division of the vehicle body design into an upper and lower level, plus the unmistakable face with its V-shape. Just like the original Bulli, the ID. Buzz too has rear-wheel drive.

Despite all the links to the great history of the model line, the avant-garde ID. Buzz gives electric motoring a new face. What has been created is a car without rival, because the ID. Buzz is not based on the compromise of a multi-traction platform, but is an electric Bulli from the ground up.

On the engineering front the new model line is based on the Volkswagen Group’s Modular Electric Drive Kit (MEB). Both ID. Buzz versions are launching this year with a high-voltage lithium-ion battery providing gross energy content of 82 kWh (net: 77 kWh). The battery supplies a 150 kW electric motor that drives the rear axle. Top speed is electronically limited to 145 km/h. Official figures for range are not yet available.

The new ID. Buzz is a very agile vehicle. For the one part, the electric motor builds up its maximum torque of 310 Nm from a standing start. And for the other, these dynamic components are joined by the vehicle body having a very low centre of gravity, as the battery is located well down in the sandwich floor. By virtue of its design, the ID. Buzz has another advantage: the electric Bulli’s turning circle is only just over 11 metres.

Volkswagen Commercial Vehicles has developed a versatile structure based on the MEB that facilitates a particularly wide spectrum of uses: With its five seats, the multivariable ID. Buzz is just as perfectly tailored to leisure time as it is to business use. With the three-seater ID. Buzz Cargo, an ultra- modern zero-emission van is taking off. But that is just the beginning. During the course of the coming year, the portfolio will be added to by a model with a longer wheelbase and a correspondingly broader range of possibilities in the interior.

Notes on the dimensions: The versions of the ID. Buzz and ID. Buzz Cargo with the standard wheelbase (2,988 mm) launching this year are just 4,712 mm long. By way of comparison: the wheelbase of the new ID. Buzz is only two millimetres different to that of the T6.1, which, however, measures 4,904 mm in total length. The ID. Buzz thus offers a similar internal length, but is able to use smaller parking spaces. The bus, which is generously fitted with glass all round, is 1,937 mm high; in the case of the van, it is 1,938 mm due to slight differences in the chassis (T6.1: 1,970 mm). The two ID. Buzz vehicles are 1,985 mm wide (excluding wing mirrors); the new model is thus 81 mm wider than the T6.1. With rims in the sizes 18 to 21 inches, the new model line runs on big wheels (750 mm diameter).

Thanks to the space-saving MEB concept, the ID. Buzz and ID. Buzz Cargo offer unusually good utilisation of space. The five-seater ID. Buzz takes up to 1,121 litres of luggage even with all seats occupied. The maximum load capacity of the ID. Buzz Cargo, which is fitted with a partition behind the front seats, is over 3.9 m3.

Clever charging solutions: using the latest ID. software, the model line will in future offer the ‘Plug & Charge’ function as well. Using this function, the ID. Buzz authenticates itself at many providers’ (DC) quick-charging stations via the charging connector, exchanging all necessary data with it in this way – a much more convenient arrangement. And there is going to be another new feature: bidirectional charging. This technology opens up a whole new spectrum of possibilities. One example: It will from now on be possible to store excess power from a home’s own solar panels in the ID. Buzz and feed it back into the home in the evening in order to be independent even without the sun.

Across the board, it is the case for the ID. Buzz and for all models of the ID. family that software updates can be downloaded over the air. These include both updates of the infotainment system and updates relating to charging or driver assist functions. The spectrum of driver assist systems includes innovatively interconnected technologies such as the new ‘Trained Parking’ function (automatic manoeuvring into and out of parking spaces), ‘Car2X’ (warnings and hazard alerts in the local vicinity) and the latest version of ‘Travel Assist’ featuring utilisation of crowdsourced data; the system facilitates forward and lateral guidance on a partly automated basis across the full speed range.

Production of the ID. Buzz starts in the first half of this year, and the European launch follows just a short time later in the autumn. The ID. Buzz is also set to be marketed in the USA – it will be the comeback of the model line from New York to San Francisco, which has been eagerly awaited by many American fans.

The ID. Buzz is incidentally not the first Bulli with an electric drive system. Fifty years ago at the Hannover Trade Fair, Volkswagen was already showing a T2 as a first prototype powered by a rear-mounted electric motor. The maximum range of 85 kilometres showed, however, that the battery technology was still far from being suitable for practical use. But even back then in 1972, the dream was born: the dream of an emission- free Bulli. In 2022 it is now becoming reality.

Commenting on the launch of the ID. Buzz, Alan Bateson, Brand Director for Volkswagen Commercial Vehicles Ireland, said: “The ID. Buzz is an all-electric game changer. Not only does it invoke the spirit of the beloved T1 Bulli, it brings something completely new and different to the world of electric vehicles. While its looks have been inspired by an iconic vehicle from the past, it is a state-of-the-art vehicle with the latest technology and practicality offered by a dedicated electric platform. I am very much looking forward to being able to share the ID. Buzz in all its glory at the world premiere on March 9.” 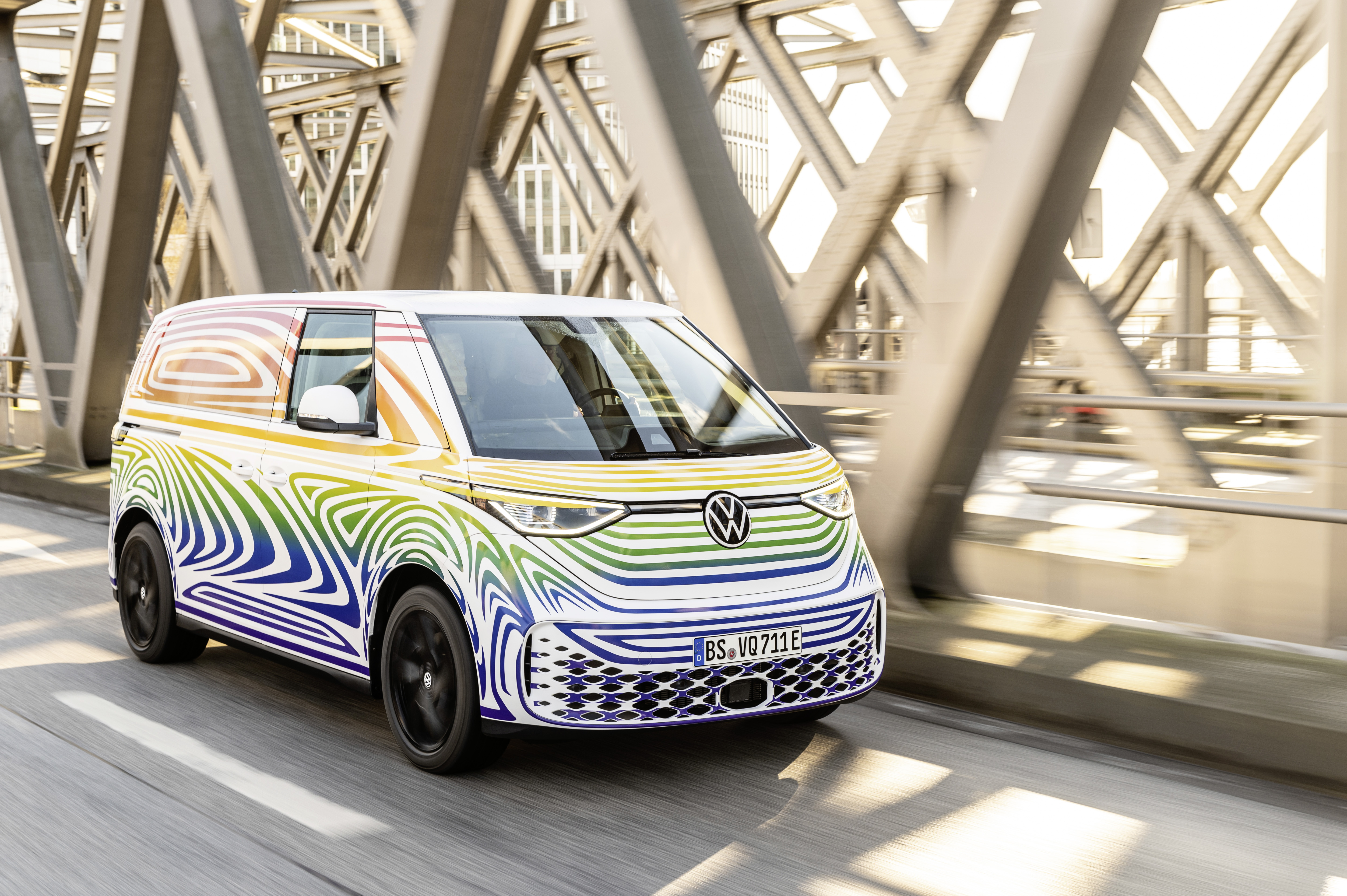