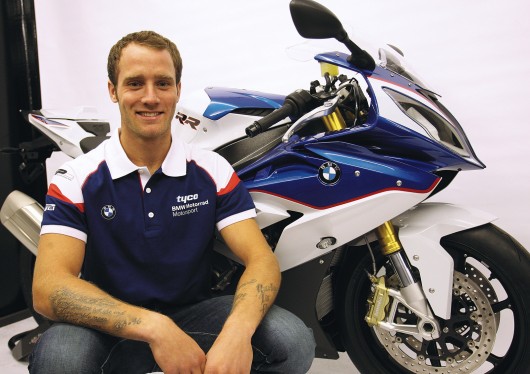 TAS Racing along with title partner Tyco Security Products has announced it will join forces with BMW Motorrad for the 2015 season. They will race in both the British Superbike Championship and on the International Road Racing scene. The rider line-up for 2015 will consist of a two-pronged attack in the British Superbike Championship, with Northern Irishman Michael Laverty returning from MotoGP to partner Englishman and current BSB number 3 Tommy Bridewell. Double British champion and 12-time International North West 200 winner Alastair Seeley will campaign a Tyco BMW S 1000 RR in the Pirelli National Superstock class during 2015. The diminutive Ulsterman will also ride a full stable of Tyco BMW machinery at the North West 200 next May.

Commenting on the announcement Michael Laverty said, “I’m delighted to be back in the TAS Racing fold for 2015; this time with a new manufacturer in BMW Motorrad behind us. It’s a very exciting time for both myself and the team: we are both new to the BMW S 1000 RR but it is a bike built for the race track and I believe we have all the ingredients required to deliver the BSB title. “I’m very motivated about my move back to BSB. I’ve spent the last two seasons in MotoGP and feel I’m a much stronger rider thanks to that experience, both on the riding and the technical side. I’ve really missed not being on a machine capable of delivering wins and podiums, so I’m already daydreaming about the battles ahead with Shakey and Co. next season.”

Tommy Bridewell commented, I’m really excited to be joining Tyco BMW for next season. I’ve met the team and they are a great bunch of guys and having ridden the BMW before, and watched what Kiyo was able to do on it this season, I know we will have as competitive a package as anyone on the BSB grid in 2015. In 2012 I put a standard BMW into the top six, so with factory support and the help of everyone at Tyco BMW, the goal is to be challenging regularly at the front and winning more races. I’m also looking forward to working with Michael [Laverty] as he has a lot of experience both in BSB and with the team. So I’m now counting down the days to the first test.”

International road racer Guy Martin also spoke on the new team, Moving to BMW Motorrad machinery is the reason I’m still racing next year and not retiring. I’ll always give it my all and to be with a quality manufacturer like BMW is mega.
I’m looking forward to getting on the bikes as soon as possible. It’s a new bike and I’ve never ridden it before, but we all know its pedigree. TAS are the best team I’ve ever ridden for; they get me and I get them and we meet in the middle, which is why we’ve been successful and this new venture with BMW is just what we need going into next season.”

Philip Neill, Team Manager said, “It really is a great honour for TAS Racing to be chosen by BMW Motorrad to spearhead their official racing efforts in 2015, and everyone involved has been very supportive in helping us put the correct package together. “As part of our agreement with BMW Motorrad, we will have full support from the factory both technically and personnel-wise next season to help us achieve our goals.”

Lee Nicholls, BMW Motorrad Marketing and PR Manager, said: It is with great pleasure that we can finally announce BMW Motorrad’s support of the TAS Racing team for the 2015 British Superbike and Road Racing season.

“In 2014, BMW Motorrad had its most successful season of racing ever in the UK, which has enabled us to increase our support to both the British Superbike and Road Racing paddocks for 2015. The TAS Racing team will spearhead our assault on track, and on the roads, and will receive the full technical support from BMW Motorrad Motorsports in Munich within the framework of the BMW Customer Racing Strategy.

“As a company we are very much looking forward to working with Hector and Philip and their team and we are confident that together with the all-new S 1000 RR we will challenge for podiums and wins across the UK and Ireland next year.”