You may have noticed that the way BMW go about naming their cars is pretty straight forward. There is the 1 Series, the 2 Series, the 3 Series and so forth, you get the point. And generally speaking the even number is the sleeker coupe version of the preceding odd number. For example, the 4 Series is the coupe equivalent of the 3 Series. Do you follow? Good; now the only place this gets a little confusing is with the 2 Series – because there are two types of 2 Series. There is the front-wheel-drive 2 Series Active Tourer and Gran Tourer, neither of which are particularly exciting and then on the other hand there is the new BMW 2 Series Coupe and 2 Series Convertible. Both are rear-wheel drive and are as exciting as they are stunning. 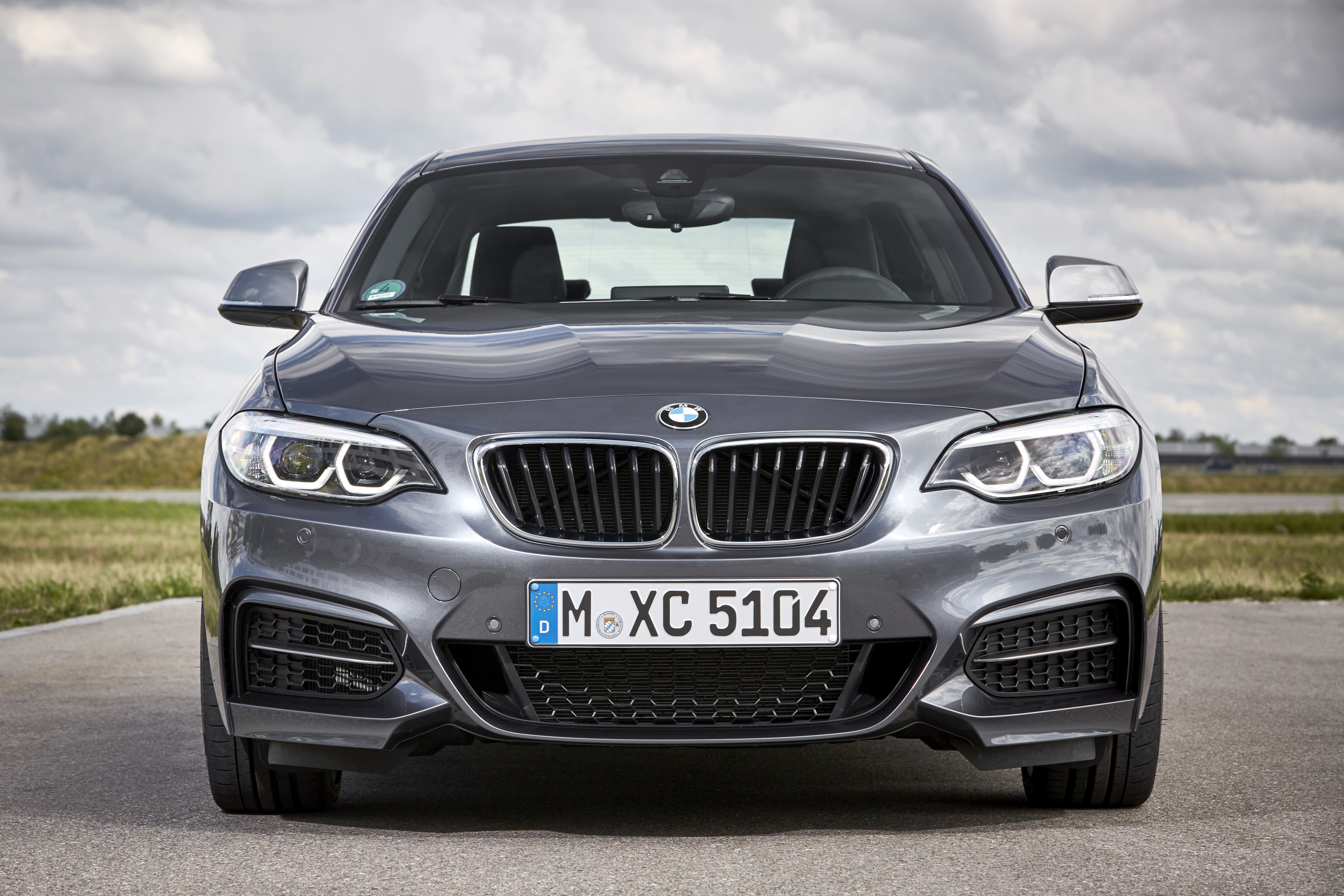 I recently headed off to Munich to see for myself just how with these latest face-lifted versions, BMW have yet again raised the bar in the premium compact class. Scheduled for launch in July 2017, the new models are now available to order and they promise to build on this success of the outgoing models. At first glance it was immediately obvious that there were a few new colours and new light-alloy wheels available for the range. Mediterranean Blue, Seaside Blue and Sunset Orange are not only new unique shades of paint but they really complement the sharper front-end styling of the new 2 Series.

These new design elements and the new standard bi- LED lights add another layer to the cars’ presence and elegance. With the changing of the guard from outgoing model to new generation comes a more eye-catching front end for the BMW 2 Series Coupe and BMW 2 Series Convertible. The main headlights can also be specified in adaptive full-LED form as an option, their prominent light graphic strengthening the dynamic and technical impression created by the front end. The familiar twincircular-headlight look now has a hexagonal interpretation – it’s a welcome update. The traditional BMW kidney grille is now larger along with the outer air intakes in the three-section front end and this gives the front end of the new models a wider look and if anything makes for a sportier facade. The flared rear arches and muscular rear end have been updated too thanks to the single-piece rear lights (LEDs as standard) with the hallmark BMW L-shape extending well into the flanks. 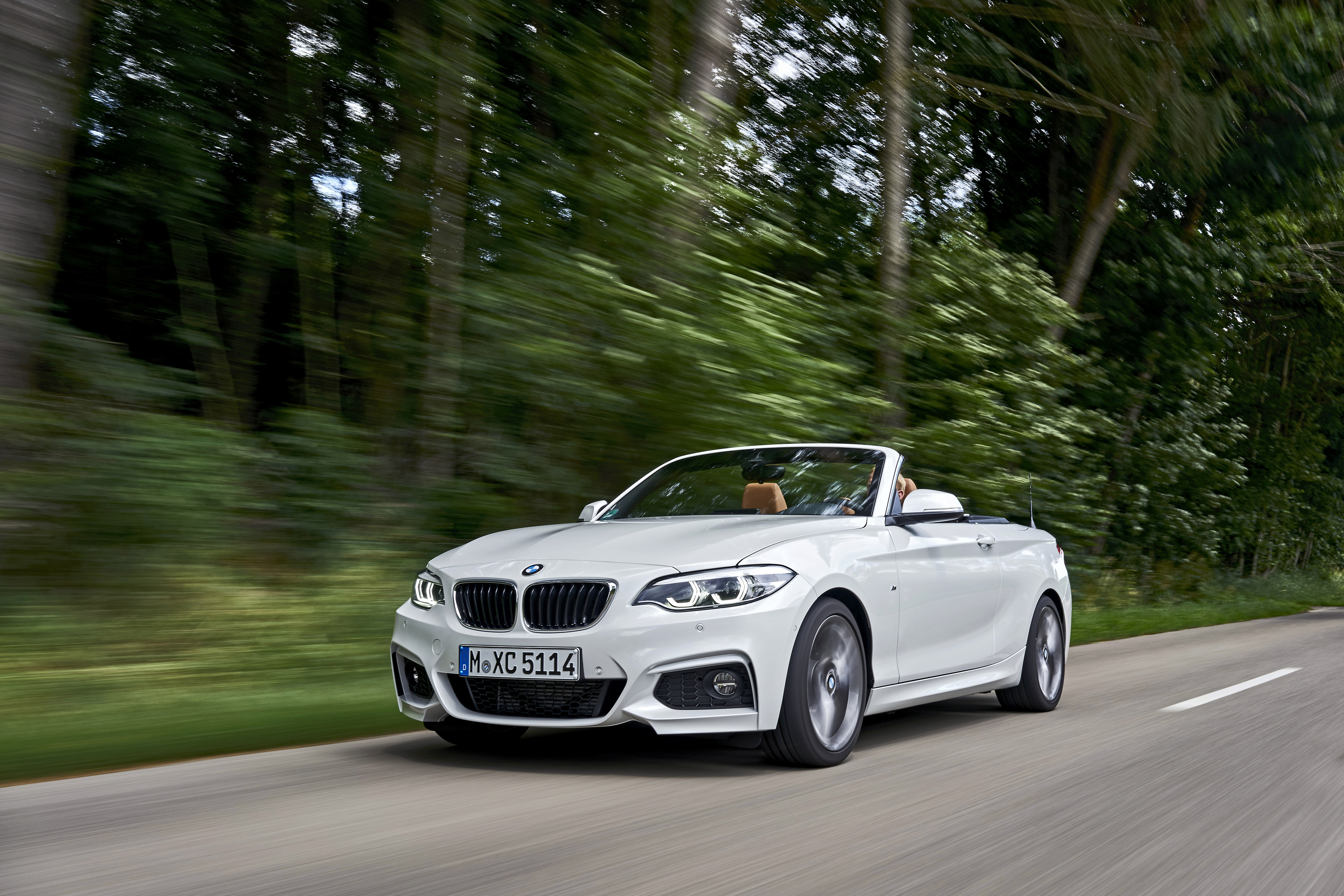 With this new facelift the interior of the 2 Series has also been given a mid-life refresh. The new instrument cluster may not be quite as fancy as Audi’s Virtual Cockpit but it is a marked improvement. There are also new air vents, some extra touches of chrome and better driver’s ergonomics. The 8.8” infotainment system has been updated to the latest version of the iDrive system complete with a refreshed design, sat nav and a touchscreen display. The new-generation models gives the driver and passengers the option of powering compatible smartphones wirelessly by means of an inductive charging tray, and Apple CarPlay can be accessed via a BMW navigation system. Meanwhile, the in-car WiFi hotspot provides a high-speed mobile internet connection for up to ten devices.

The interior now has a more spacious, airier and brighter feel to it. The elegant design is accentuated by a host of details, such as contrast stitching and high-gloss black surfaces. New cloth or leather seat upholstery variants, interior trim strips in aluminium or fine wood and high-gloss black panels with chrome accents provide even greater scope for individualisation. As well as the standard model, the Coupe and Convertible are available in Luxury Line, Sport Line and M Sport variants, and the line-up also includes a BMW M Performance representative – the BMW M240i/M240i xDrive. 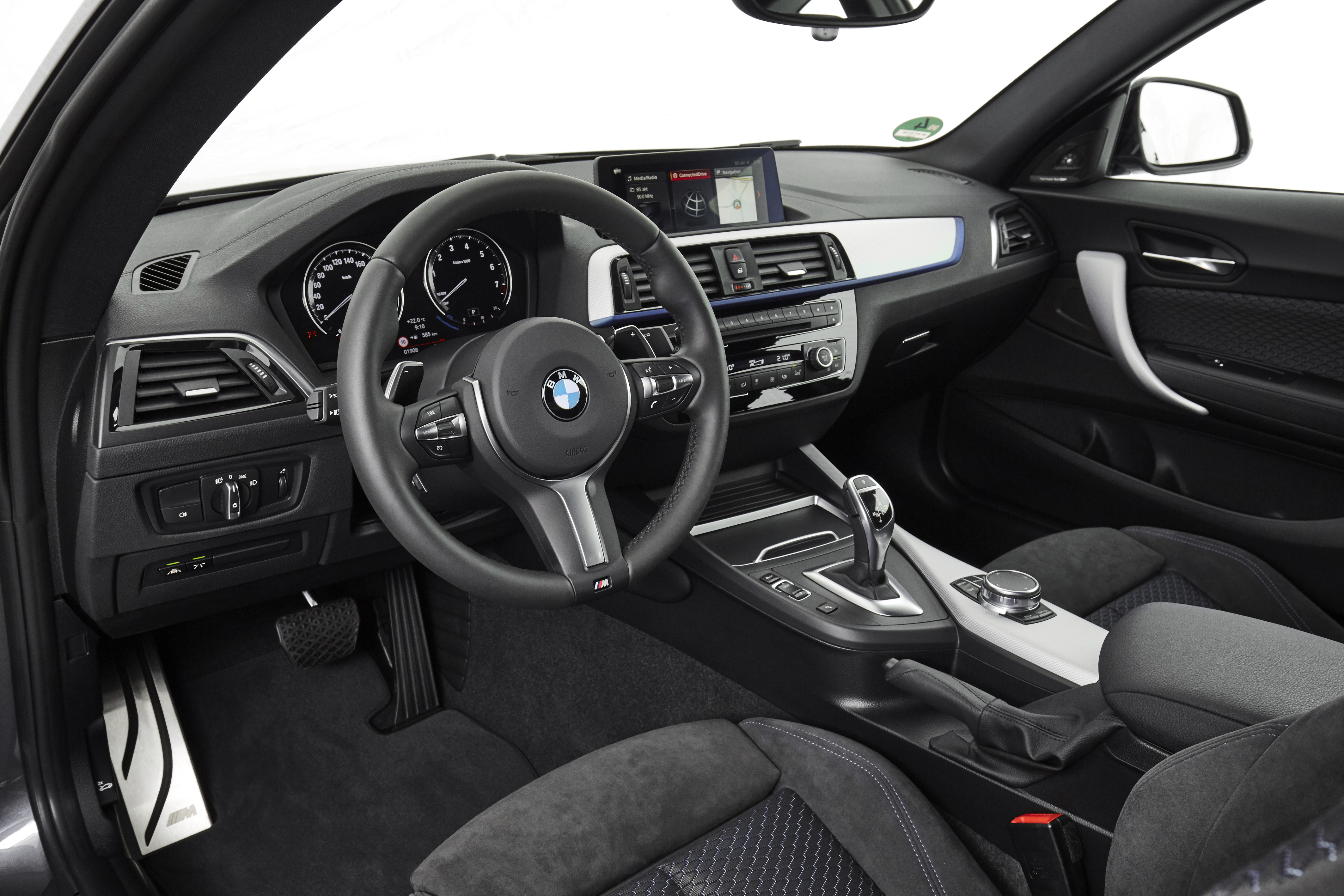 At 4,432 millimetres in length, the BMW 2 Series Coupe and Convertible are fairly similar in size to some of the older 3 Series models, nonetheless they are a sporty compact package. The boot space in this new Coupe model has increased by 20 litres or so to 390 litres which puts it roughly on a par with the likes of a Volkswagen Golf.  Naturally enough the Convertible has considerably less trunk capacity but it’s worth noting that the electronically controlled roof can be operated whilst on the move at speeds of up to 50 km/h (31 mph).

Now initially the 2 Series may appear to be the most recent digit to join the BMW Series ranks and in fairness it is but those of you who know your cars or those of you who have been around a little longer than colour television will remember the incredible BMW 2002. Well the new 240i M Sport is quite possibly the modern equivalent of the turbocharged version of that 1968 classic. The BMW M240i/M240i xDrive are the M Performance representatives of the Coupe and Convertible line-ups. Their three-litre straight-six engine with direct injection and M Performance TwinPower Turbo technology develops 340 hp, capable of propelling the BMW M240i xDrive Coupe from 0 to 100 km/h in just 4.4 seconds. 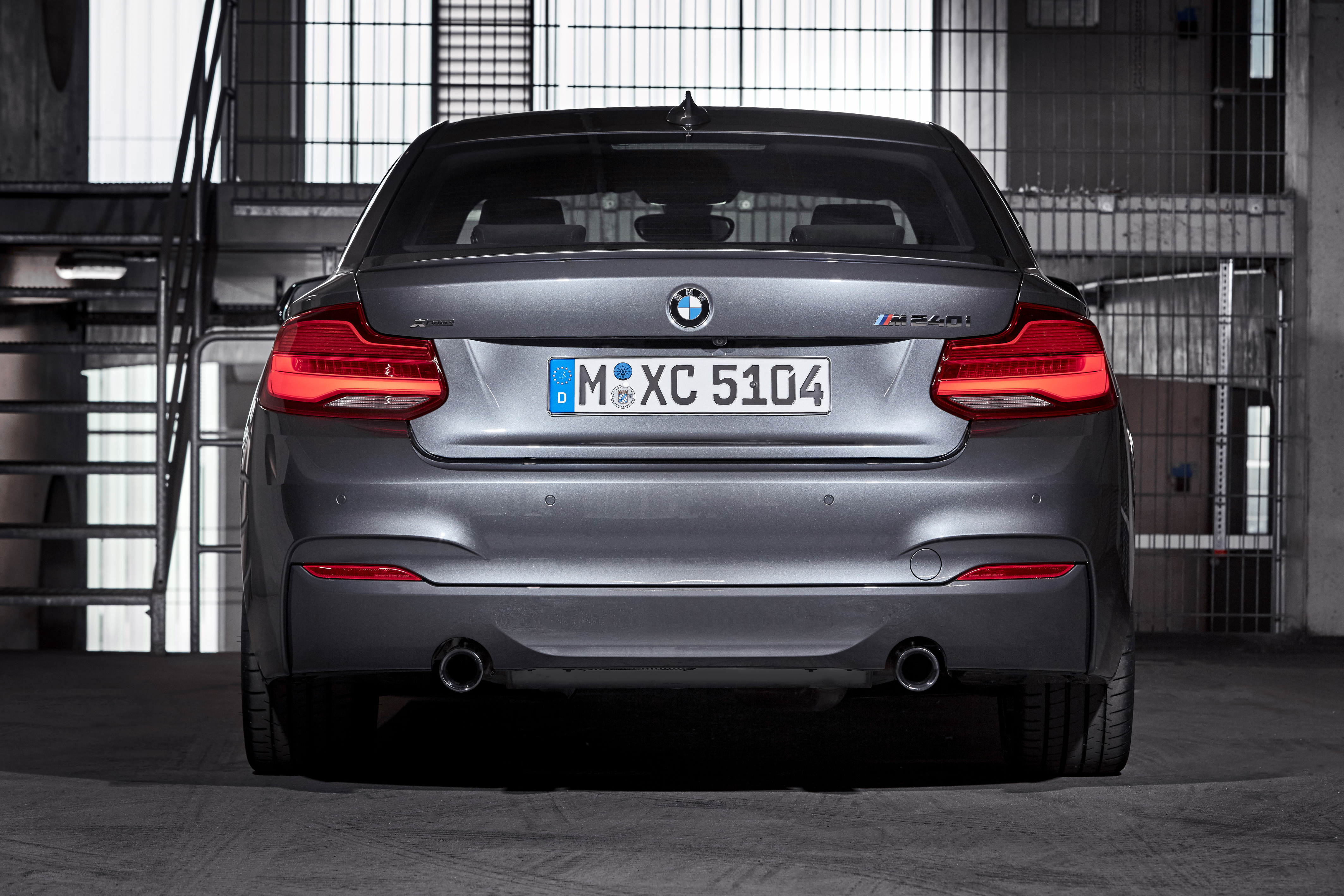 Outside of BMW’s flagship 240i Coupe, I drove the Convertible variant equipped with the 220d engine. The engine line up is borrowed from the 1 Series and so there is also an entry level 218d and a larger 225d as well. The 220d is a tried and tested choice amongst Irish motorists. It may not have much in the line of the exhilarating speed of the 240i but it actually pulls adequately from low engine speeds and is excellent as a motor cruiser not only for its comfort but because it is brilliantly frugal.

The new 2 Series is also loaded with the latest tech from BMW’s safety department. The list of assistance systems customers can specify includes Active Cruise Control with Stop & Go function. The Driving Assistant is also available as an option and comprises the Lane Departure Warning system and City Collision Mitigation, which applies the brakes automatically at speeds up to 60 km/h (37 mph) in response to an imminent collision with a car, motorcycle or pedestrian. The M240i and 220d variants of the BMW 2 Series Coupe can be ordered either with the particularly engaging characteristics of rear-wheel drive or BMW xDrive intelligent all-wheel drive. The xDrive system is only available with the 240i in the 2 Series Convertible. 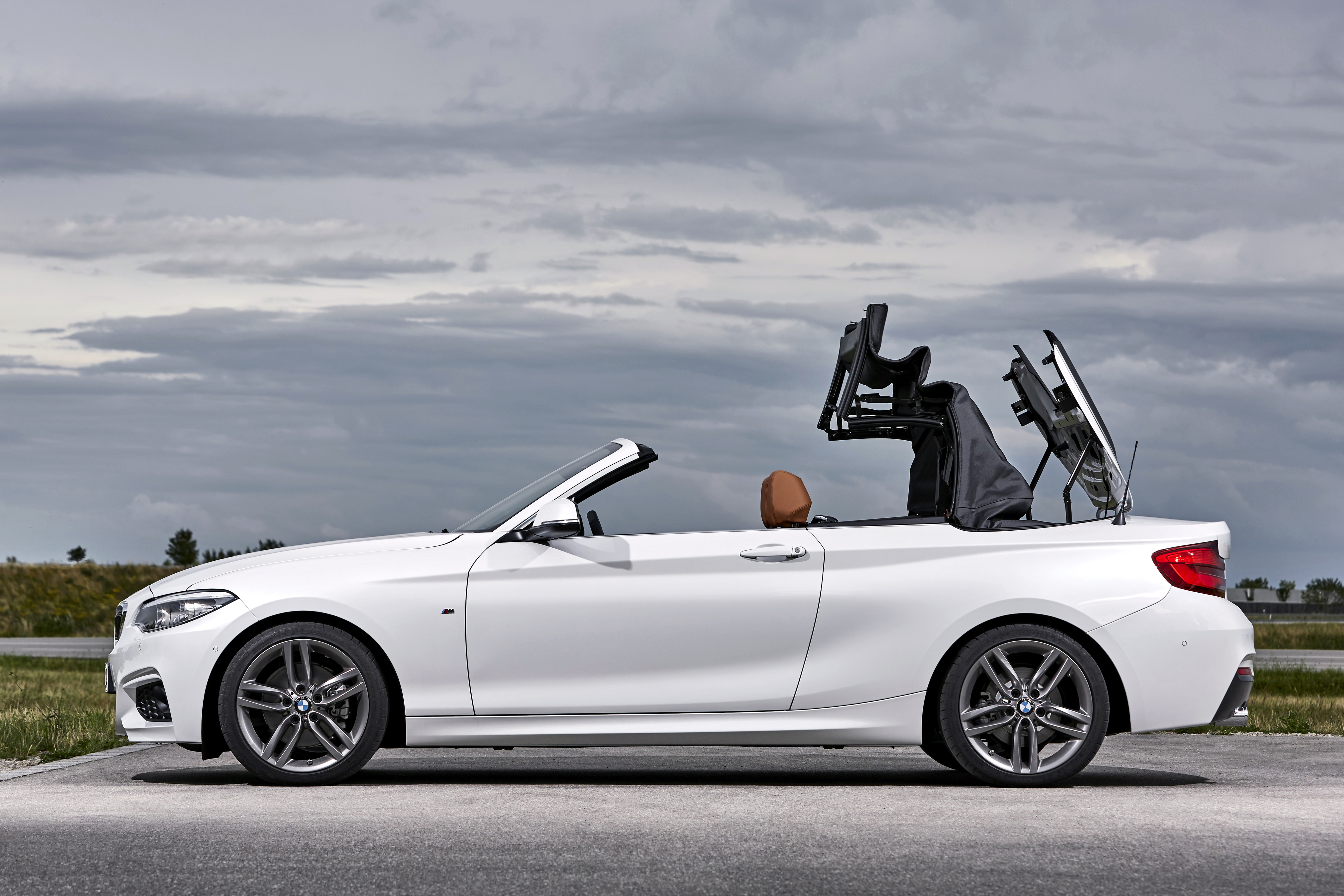 In my eyes, the 2 Series Coupe is undoubtedly the best looking BMW model until you get up into 5 Series territory. It really is a near perfect combination of sporty looks and everyday usability. On the road it handles brilliantly and displays balance and poise throughout. The 240i M Sport is exceptionally quick and the 220d impressively economical, even if it is a touch too noisy. Starting at €35,040 it may be a little pricey but regardless of your engine choice, the 2 Series is a car you will look forward to driving every single day. 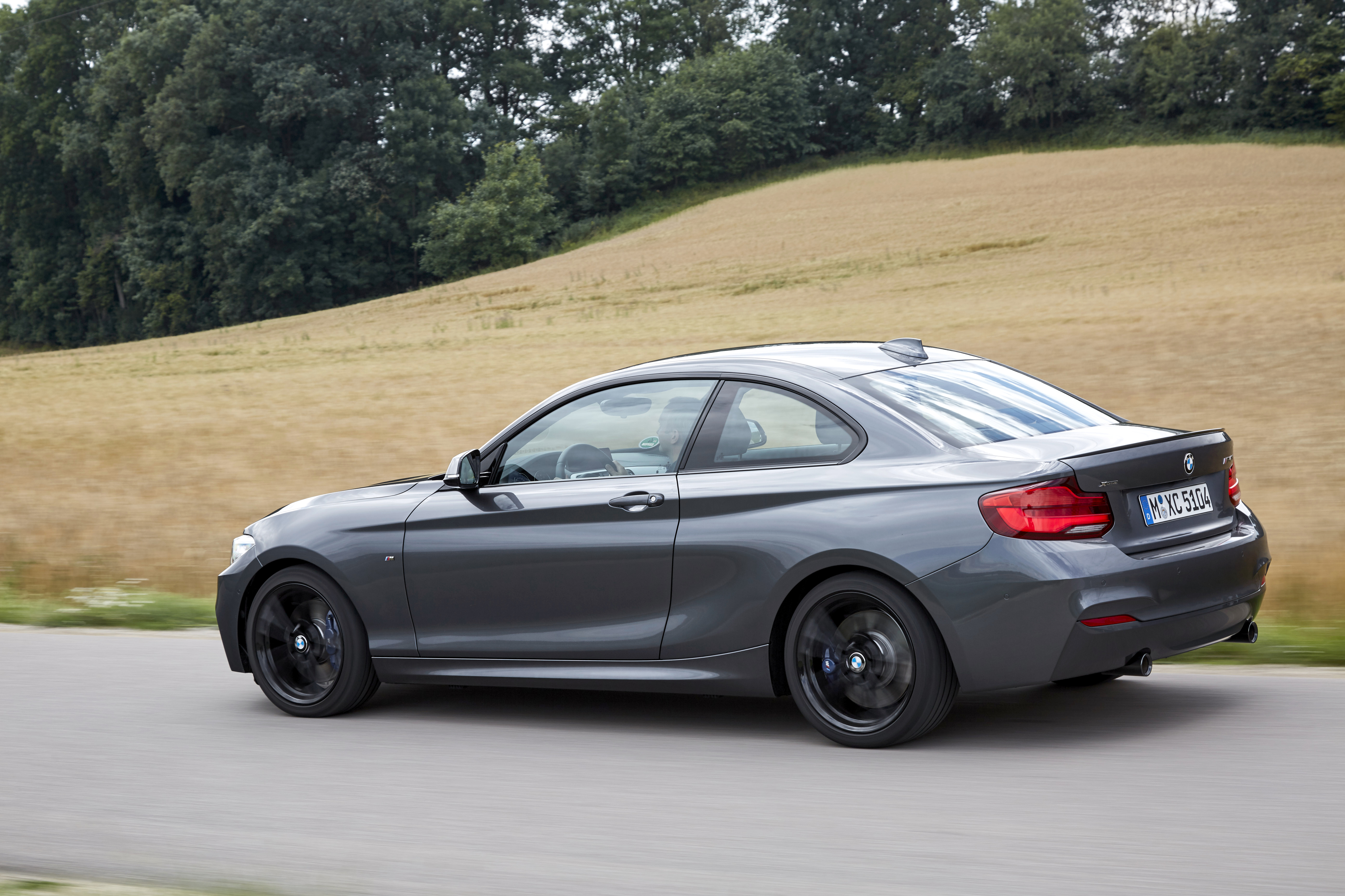