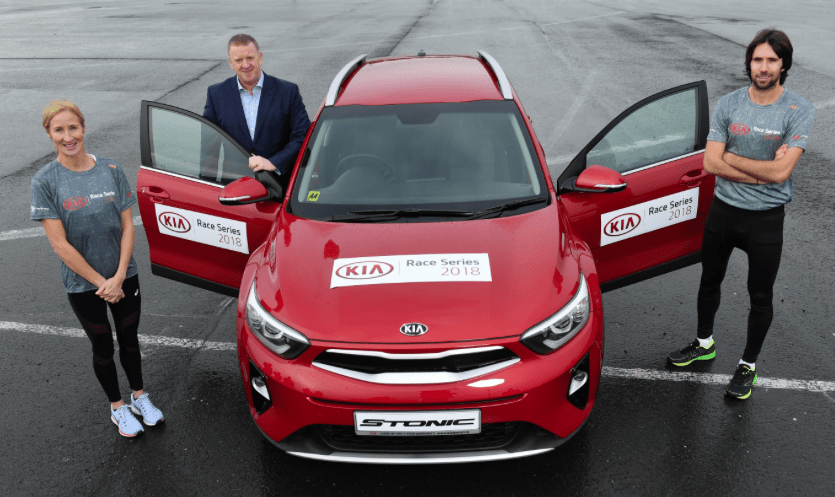 Kia Motors Ireland have this week announced a new nationwide running race series which will take place in 2018. The Kia Race Series will bring together seven well established regional races around Ireland under one umbrella with a new closed road running event in Mondello Park. The Kia Race Series will kick off in March with The Streets of Portlaoise 5k with the finale event in Mondello Park organised in September by Pop Up Races.

The Kia Race Series is encouraging Ireland’s best male and female distance athletes to compete against each other, with a new Kia Stonic up for grabs for both the overall male and female winner of the series. To be eligible to win the series, runners must take part in five of the eight races including the finale. There is the added incentive of €7,000 bonus fund available for course records. The series also open to runners of all abilities from elite to club to weekend warriors with all those who take part in the series receiving a commentative t-shirt. For more details and to enter on-line go to kiaraceseries.com.

James Brooks, Managing Director of Kia Motors Ireland, commented at the Kia Race Series 2018 launch: “We are really proud to launch the inaugural Kia Race Series, Kia is primarily a family brand and we see a great fit between the race series and our customer base. The series offers runners of all abilities the chance to participate to the best of their ability; and with the addition of the Mondello International 10k we hope to increase opportunities for people to take part in major closed road running events in communities throughout Ireland.”
James added, “The series will be a great platform for inspiring competitiveness among new and well established runners with the all new Kia Stonic on offer as the prize for the overall male and female winner of the series.”

Irish Marathon Record Holder Catherina McKiernan commented: “The Kia Race Series will encourage elite runners to race against one another; ultimately racing is the lifeblood of the sport”. She added: “On a personal level it is exciting that the Run with Catherina race, which takes places annually in my home town of Cavan, is part of the series. The race will take place in April to coincide with the 20 Year anniversary of my London Marathon win back in 1998.”

One of Ireland’s current distance elite athletes Mick Clohisey of Raheny Shamrock Athletics Club, plans to take part in the Kia Race Series also. Olympian Clohisey enjoyed a highly-creditable 22nd place at the World Athletics Championships in London in August 2017 running 2:16:21. Speaking at the launch of the Kia Race Series he said: “I am excited about the series, I feel it will bring the standard forward of distance running in Ireland. Back in the 80’s there was more depth at the front end of road races throughout Ireland and it would be great to see that level of competitiveness return.”

The official timing partner for the Kia Race Series is Pop Up Races, Ireland’s leading race timing and event Management Company. Pop Up Races will also be race organisers of the Finale event in Mondello. Brian Conroy, founder of Pop Up Races said: “We are delighted to be partnering with Kia Motors Ireland and the seven road races and their race directors. For the last race of the Kia Race series in Mondello, we are planning to bring the X factor to make the finale memorable for all runners taking part.”