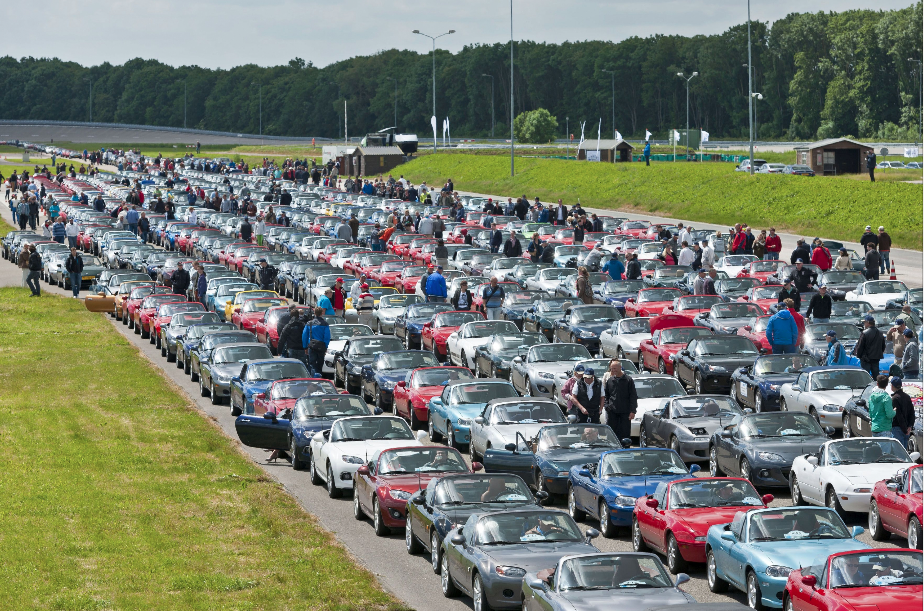 Taking the unconventional and often move challenging route to achieving driving pleasure is in the DNA of every member of the Mazda team. The evidence can be found in the record books and historical chronicles full of examples of a carmaker determined to succeed at doing things its own distinct way. The records, milestones and other legendary undertakings, are found across a wide range of driving areas.

It all began in 1931, when the then-machine tool producer built its first vehicle, a three-wheeled truck called the Mazda-Go. Toyo Kogyo Co., as Mazda was called at the time, would go on to manufacturer more than 50 million cars and is aiming to crack the 2-million mark in annual production capacity by 2024. Along the way, the company has always pushed the limits, and it began doing so early on.

A chronology of significant achievements

Mazda sets out on a cross-country promotional tour with five Mazda-Go models (type KC and DC). Starting in Kagoshima near the southernmost tip of Japan’s main islands, the expedition showcases the three-wheeler’s durability on 2,700km of dust, mud and backbone-rattling trails, arriving in Tokyo 25 days later. The publicity significantly boosted sales; in 1940 Mazda would even present its first passenger car prototype. The Second World War, however, prevented the four-door sedan from going into production.

Mazda resumes commercial vehicle production in Hiroshima only four months after the atom bomb exploded over the city.

Company enters the passenger car market in record-breaking style with the Mazda R360 Coupé. The charming lightweight 2+2 coupe captured a 65% share of Japan’s flourishing microcar segment that year and 15% of the entire domestic car market.

Launch of the Mazda Cosmo / 110S, the world’s first production car with a twin-rotor Wankel rotary engine and only the second rotary production model ever. The Cosmo was also the first rotary car to compete in the gruelling 84-hour Marathon de la Route endurance race at Germany’s Nürburgring, finishing fourth in 1968.

Mazda produces its 100,000th rotary-engine vehicle, a level no competitor would ever achieve. The Hiroshima carmaker would go on to sell almost two million cars, pickups and vans with the unique powertrains – so far.

Breaking new ground at the Tokyo Motor Show, Mazda presents the space-age Mazda CVS Personal Car. Well ahead of its time in many ways, the driverless electric minivan-like prototype offered an early glimpse of a traffic vision that still eludes us today.

Two Mazda 323s make the 15,000km journey from Hiroshima to their IAA premiere in Frankfurt in 40 days with no breakdowns, except for a fewflat tires. The all-new compact confirmed its reliability even before going on sale.

Introduction of the Mazda RX-7, a stylish compact sports coupe. A delight to drive, it would go on to be the most popular rotary model in history with 811,000 units sold over three generations, also setting countless records on the race track. The same year, a modified RX-7 sets a land speed record for its class (296km/h) at the Bonneville Salt Flats.

The rotary RX-7 breaks countless records on the race track, winning among other things 100-plus IMSA races, more than any piston-engine model, while dominating the GTU class (under 2.5-litres) at the 24 Hours of Daytona for 12 years in a row from 1982-93. In 1986, a second-generation RX-7 achieves a new class speed record of 383.7km/h at Bonneville.

Mazda launches the MX-5, singlehandedly reviving the market for classic roadsters with the concept of Jinba Ittai, or “rider and horse as one”. Setting new standards for lightweight engineering and accessible driving fun, the affordable two-seater is an instant hit, repeatedly breaking its own production and sales records while wining hundreds of awards around the world and attracting a vibrant fan base. It also becomes the world’s most-raced production car.

In a sequel to the 1977 trip, six Mazda cars (626s, 323s and E2200 vans) drive from Japan to Mazda’s German headquarters in Leverkusen, this time through the dissolving Soviet Union.

In one of the greatest achievements in the history of the rotary engine, the Mazda 787B shocks the racing establishment by winning the 24 Hours of Le Mans. It was the first victory by a Japanese brand and the only one ever by a pistonless car.

Guinness World Records officially declares the MX-5 the best-selling two-seater sports car in history with 532,000 units sold. Updated several times since, it’s a title which the MX-5 maintains a stranglehold.

The rotary Mazda RX-8 picks up where its predecessor left off, setting 40 international FIA records on the high-speed oval at the Papenburg automotive testing facility in northwest Germany.

Several new-generation Mazda3s repeat the Japan-to-Germany excursion through Russia, Belarus and Poland, this time with fans, journalists and bloggers reporting live from behind the wheel.

The Mazda fan community sets a new Guinness World Record for the largest parade of Mazda cars as 683 MX-5s joined a procession at Leystad in the Netherlands, breaking the 2010 record of 459 MX-5s set in Essen, Germany.

The Mazda6 demonstrates the potency of its Skyactiv-D engines, shattering the previous record for highest average speed over 24 hours (221.1km/h vs. 209.8km/h) as well as numerous other FIA records for 2.0-2.5 litre turbodiesels.

Mazda fans break the world record for most MX-5s at any single event as 1,934 roadsters from across North America attend a car show at the Mazda Raceway in Salinas, California.

The 1-millionth MX-5, a fourth-generation model, rolls off the assembly line at Ujina Plant No. 1 in Hiroshima. The red soft-top then embarked on a world tour during which it would collect the signatures of around 200,000 fans.

Another production milestone reached with the 50 millionth Japan-built Mazda. More production landmarks are inevitable as Mazda sets its sights on increasing annual global capacity to 2 million units by 2024.

Mazda shows the on-ice capabilities of the AWD version of its popular CX-5 on frozen Lake Baikal after becoming the first carmaker to get official permission to go to Siberia and cross the world’s oldest and deepest lake.

Truly in its element, a first-generation MX-5 breaks the record for the most hairpin turns covered in 12 hours. The 2,900 curves, taken during a rainy night on the Kaunertal Glacier Road in the Austrian Alps, were more than double the previous RID Rekord Institute for Germany best mark.

Launch of the Skyactiv-X. The world’s first commercially available compression-ignition petrol engine combines the outstanding real-world fuel efficiency and torque of a diesel with the smooth, free-revving nature and responsiveness of a Skyactiv-G petrol powerplant.